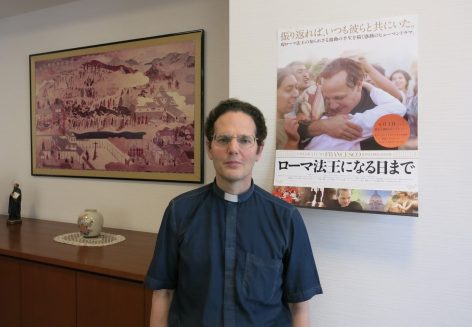 Q. Your country of origin is Argentina, isn’t it? Where in Argentina?
The place where I was born was a place named Larroque, in the Argentine countryside. The population was just 5,000. In the village practically everyone knew one another and we children felt it only natural to go to church. That was part of our daily life. There was still there an old-style religious atmosphere.

Q. Why did you decide to become a Jesuit priest?
I was raised in a mission school and was accustomed to seeing priests and sisters daily, and so during my childhood becoming a priest was one of my future options. Then, as I moved up to junior high school, I felt that God was calling me. We had priests from different congregations coming to say Mass at the school. They talked to us about priestly vocations. Once a Jesuit priest came for Mass and I felt attracted to his talk on spirituality. I wanted to know more about Ignatian spirituality and thought about making the Spiritual Exercises. Thus, after graduating from high school at age 17, I entered the Jesuits.

Q. What kind of probation did you undergo?
I was living in Larroque, in the province Entre Rios, where there was no Jesuit church or other Jesuit institution, so I moved to the novitiate and house of studies of San Miguel, in Buenos Aires.

At that time the military regime had been replaced with a democratic system. Of course, the problem of many people whose whereabouts were unknown was sadly unsolved, and even among religious there were two different groups of people, those with victims of the military regime in their family and those belonging to families with military personnel linked to the former military regime. In society at large there were people with all kinds of wounds and antagonistic feelings. Since the guerrillas and the military did not usually show up in the countryside, we had not realized how great oppression was taking place but later heard many stories. We were also able to hear many things about the time when Pope Francis was Jesuit Superior and Provincial.

Q. How was your coming to Japan decided?
About ten of us had volunteered and were expecting a positive answer and had the feeling that in some respect our petition would be granted. On the other hand, we had no predetermined image about Japan. It was a totally unknown world to us.

Q. What were your first impressions of Japan when you arrived in 1985?
Compared with the gap I felt on leaving the village for the city when I was 17, my arrival in Japan was not as startling. But, thinking back on it later, we simply moved from one Jesuit community to a different one, and it was easy to find someone who could speak English or Spanish among the Jesuits. Such a situation is difficult to find among foreign workers or foreign tourists. Frankly, since we were living within a blessed environment, we did not feel any special cultural shock.

Q. And what about your life after been ordained as priest?
I was ordained to the priesthood in 1996. My first assignment was Nagasaki. Fr Nicolás, the former Jesuit Superior General, was the Provincial at the time and, when I was in the final stage of theological studies, he gave me the orientation to continue the work done in Nagasaki concerning the Christian history of Japan. I prepared myself for the job by working together with Fr Yuki Ryogo, who was Director of the Twenty-six Martyrs Museum in Nagasaki. I was given the opportunity to do master’s degree studies in history at Kyushu University. When there was a need to replace Fr Yuki in 2004, I became Director of the Museum.

Q. What are the most significant impressions from your 20 years in Nagasaki?
I found the attitude of pilgrims visiting Nagasaki really moving. I felt the strong influence of the location. We live there and become accustomed to the place. However, visitors who come for the first time and foreigners from abroad find it deeply moving to visit the sites where Paul Miki and others were martyred. Every year children on school excursions, mostly from mission schools, come to visit the Memorial and the children are shocked to see the places where children of their own age, like Ludovico Ibaraki and others, were martyrized for their faith.

I was also impressed to observe the dramatic increase in the number of Korean pilgrims during my 20 years in Nagasaki. During my first years, there were practically no Korean visitors, but little by little friendly gatherings increased and, most probably, more Koreans than Japanese now visit the Museum. As a result, I believe that mutual gatherings focusing on the Christian martyrs and Christian faith promote unity between Koreans and Japanese. I feel that, in spite of differing views of history, people with rivalries and hostile feelings have the strength to overcome those sentiments. The concrete instances of martyrs who gave their lives for Christ, no matter who they were, gives people great encouragement and consolation. The emphasis on such similarities helps to promote union between both countries and that becomes a good symbol to deepen more mutual communication. I guess it is necessary to take advantage of such blessings.

Q. What type of person was Fr Bergoglio, the present Pope?
He often uses the expression “the popular faith” or the popular devotion of the people. In that way he refers to those who do not know about theological reflection, people with just the basic religious education in the catechism they got when they were children. They are that type of Christians and, in fact, they are the ones who make up the Church. He always considered them the Church itself.

At that time, in the Church of Argentina, only priests and religious studied and knew theology, so to some extent discrimination existed toward those lacking studies in religion. There was an atmosphere of refusing to be criticized by ordinary people. That was also true at the level of the Bishops’ Conference and among religious. From the beginning, Fr Bergoglio said that those people were manifesting the true image of the Church and that we should learn from them how to believe and behave as Christians, instead of just trying to make them learn what we were teaching them.

As a result, during our philosophical and theological studies we went once a week to places where poor families lived to study catechism together with the children. That moved us to change little by little. No matter how much we were studying, we felt that there was no meaning in that unless one is able to explain one’s reflections to ordinary people for them to understand. In order to do that, we must listen to the people’s desires and wishes. There were no fixed programs, but as a result of the opportunities we were offered to enjoy direct contacts for years, the ordinary people formed us. The Pope continues to give importance to such direct contacts with ordinary people.

But, at the same time, he was very strict in stressing the need we had to study properly. He often told us that we should imitate how ordinary workers work 8 hours a day. We should not be negligent. Our duty was to study at least 8 hours daily. I always felt that he had a very balanced view of our formation.

Q. Could you explain your future vision as the “New” Japanese Provincial?
Jesuit Provincials meet personally with each member of the province, and after listening to their wishes, give them a mission. I have just started my fourth visitation. Until I hear all the members I cannot grasp the overall realities. More and more I feel that my job as Provincial requires more time.

Due to the ageing of our members and the decrease in number of senior missionaries and Japanese members, naturally we are becoming a smaller province. This urges us to discern what ought to keep. We have the direction of a number of schools and centers that are meaningful for the Japanese Church, but we should decide on which are the proper works only Jesuits are able to do. The trend is to pass responsibility on to lay people even in those fields that we, as a religious body, have been doing. Of course, naturally, the training of lay people for those tasks is a must.

That said, there are three pillars to be considered. One is theological reflection. We in Japan must build a theology that is more adaptable to Japanese people. A second pillar is spirituality. Ignatian spirituality should be the essential guiding content for the formation of lay people also. The third pillar should be the social apostolate to address social issues. In other words, we must act in society according to what we preach. These three pillars fit every field and every institution. In parishes as well as at the university level, theological reflection, spirituality, and the social dimension are all necessary, and in order to include these three elements a process is needed to select what can be accepted and, on the contrary, looking toward the future, we have to do away with all obstacles that obstruct our mission.

It is my desire that the social centers, with the main task of the social apostolate, should include in their programs theological reflection and social analysis from the standpoint of the Bible and Ignatian spirituality.

For a long time the promotion of vocations was left to the “vocations team.” However, things are different today. All Jesuits, working with people in their own field, have to be highly aware of promoting vocations. I believe that the three elements I mentioned must all be present in all Jesuits, active Jesuits as well as those still in formation and those already retired. Most Jesuits in Japan are concentrated in very specialized fields, but the need is rather to try to integrate the three pillars mentioned above.