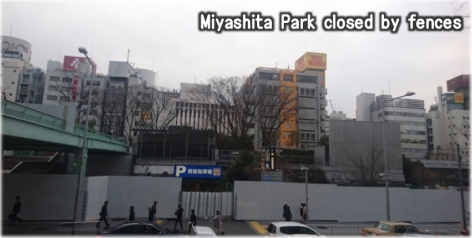 Suddenly on March 27, 2017, Miyashita Park in Shibuya was completely enclosed by a series of 3-meter-high steel panels.

Since the end of last year, this park had served as a place to sleep for approximately 20 people without shelter. While 9 people were sleeping under a cold rain in the park on the evening of March 26, suddenly a large number of ward personnel, guards, and police rushed into the park and enclosed it. Shibuya Ward initiated construction of the enclosure early in the morning on the 27th and prohibited public entry into the park after 9 a.m.

The ward arranged for this blockade, without providing prior notice to the general public or park users, including unsheltered persons sleeping there. At the time of the enclosure, several people sleeping in the park were driven out into the cold sleet. Some who wished to wait until the downpour stopped were shut in by the fencing without any explanation regarding the construction. 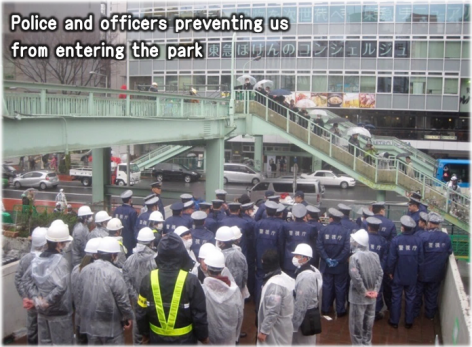 Police were mobilized against sympathizers who had gathered to support persons protesting the sudden enclosure from inside the park, and one sympathizer was arrested. Shibuya Ward then had its personnel and security guards closely surround sympathizers in the park so as to hinder their movement, and for over 15 hours inhumanely prevented them from using water fountains and toilets in the park. Some persons were placed under house arrest.

Homeless persons and their sympathizers in the park worked together with those outside the park to demand a meeting with the Shibuya Ward mayor as well as a secure, medium-to-long-term place to sleep to avoid the rain. Negotiations continued past midnight. Ultimately, Yoshitake chief of Park Division promised in a statement made over a microphone that he would negotiate with the Ward’s General Affairs Department to secure a sleeping place from among Shibuya Ward’s public properties. Meanwhile, the return of their blankets and other necessities for sleeping was delayed by Shibuya Ward’s non-responsiveness, and did not take place until after 1 a.m. More than 12 hours had elapsed since persons in the park had been promised that their personal belongings would be returned after ward personnel removed them from the park at 9 a.m.

That day the evicted homeless moved to the front of the Shibuya Ward offices to sleep there. Nevertheless, early the next morning, as if there had not been any promise, Shibuya Ward attempted to start construction their new sleeping spaces in front of the Shibuya Ward Offices. A homeless person who protested was arrested by the police. Finally, 2 persons arrested mentioned above were released after 3 weeks detention in awful harassment, without prosecution (how is that possible?). And again the homeless who were evicted, at least at the present writing, are all safe, sleeping together at a different public site.

Miyashita Park is located in Tokyo’s Shibuya, a major commercial center. Many people experiencing homelessness have stayed in Miyashita Park in small cardboard or other structures since the late 1990s. There were times when over 130 homeless people were living there. In addition, Miyashita Park has served as a space for organized “outdoor soup kitchens” and other collective actions to protect and preserve the health and interests of homeless persons.

In 2009, Nike Japan and Shibuya Ward signed a contract which awarded naming rights for Miyashita Park to Nike and included terms for park reconstruction. The construction was delayed because of widespread protest, and Nike eventually gave up renaming the park with its own name. However, in the fall of 2010, Shibuya Ward closed the park to the public after evicting homeless persons staying there.

In the spring of 2011, the park was reopened with over half of its space dedicated to new pay-to-use facilities such as a skating park. At night, the park was closed and locked.

In the spring of 2015, a court judgment released in a case for damages against Shibuya Ward ruled that the contract between Nike and Shibuya Ward was illegal. Naturally, Shibuya Ward should have submitted to the court decision but, on the contrary, in the fall of 2015, Mitsui Fudosan Realty, one of Japan’s three major real estate corporations, decided on a plan to rebuild Miyashita Park atop a three-story shopping mall and alongside a 17-story hotel. However, such a plan supposes changing a public park into a shopping center, which requires the City Planning Council[1] to revise their urban planning and, previous to that, to reform the urban parks law[2] for the implementation of the project.

Historically, Miyashita Park has served as an important survival space for homeless persons. It is also an important space where anyone in the city could spend time without having to spend money. However, in recent years, large companies such as Nike and Mitsui Fudosan Realty, as well as Shibuya Ward, have tried to turn the park into a site for commercial profit. In their eyes, members of the public who cannot pay for the use of the park, such as persons experiencing homelessness, are unwelcome. Since they do not enjoy any market values, they all become targets of eviction.

At present in Shibuya Ward large-scale redevelopment—commonly referred to as the “hundred year” plan— has progressed, including areas surrounding Shibuya Station. As a result people experiencing homelessness, because of business failures or social dislocation, are losing space where they might rest during the day or night. At the same time, the number of people becoming homeless has not declined. Under such circumstances, the development project slated for Miyashita Park by Mitsui Fudosan Realty—and promoted by Shibuya Ward for the Olympic Games—has begun with the eviction of persons who use the park to rest. Such a move necessarily neglects the public nature of a park, which protects and preserves the rights of all people to use park space, and is pervaded by a commercial logic seeking only business profits. Thus, these events—and this development project—represent violence against humanity. The local government of Shibuya Ward has, in fact, repeatedly ousted people experiencing homelessness from public spaces over recent years.

Recently in Japan, GDP growth is considered as a national policy and the mass media often report positively on the matter. The growth of the GDP is believed to improve the life of people who are suffering. The Olympic Games enjoy an important position because they are instrument to increase the GDP. Nevertheless, the GDP indicates only the total value of the national product without any direct link with people’s life. It is rather directly connected with business profits. The theory that growth of the GDP is distributed to the poor is called “trickle down” theory but, as Pope Francis deplores in his apostolic exhortation “The Joy of the Gospel,” it is impossible to believe that anybody supports that (no.54). The incident I have been mentioning is a case of “counter trickle down,” which shows that, by excluding the poor and homeless, the GDP is increased.

Reuters and other foreign mass media have already reported on this incident but, as far as the domestic media are concerned, only the Tokyo Newspaper has picked up on it. I feel that Japanese society has become more and more insensitive to the critical situation of the poor in Japan.

Nevertheless, Habitat International Coalition, having UN Consultative Status has made public an official letter on April 10, stating that “this incident falls under International Law, as an important violation of Human Rights” We have tended to be brainwashed into feeling that things without a market value do not deserve to have any value at all. At least, my impression is that public news dispatches are difficult unless there is some relation to the market. Taking into consideration such a strong trend, we should critically analyze what promotes evangelical values or what works contrary to them and, if necessary, we are called to support action for changes in that trend which promotes anti-evangelical values.

*This article is based on a joint statement “Urgent statement of protest against the total enclosure of Miyashita Park in Shibuya Ward”(mar. 30th 2017).

[1] The total closure of the park occurred on April 7 before the holding of Shibuya Ward’s City Planning Council. I attended the meeting as an observer. Many members of the Council expressed their objections. “This time there was no notification of closure either to the ward assembly or to those using the park.” “The fact that the park was closed before the decision of the Council is a big problem.” “The content of this plan is illegal.” “First of all, the commercialization of the park goes against the goals of Shibuya Ward and that cannot be accepted.” Some members thus clearly exposed their opposition and, since no one clearly expressed approval, the meeting ended with the statement of the chair declaring “approval on the whole.” It was exactly a meeting of the Council with pre-decided results and unclear content.

[2] Although it did not become news, in April 2017 the National Diet during its 193rd session enacted a decision which made commercialization of the park all the more possible.