A Challenge to Reconciliation

1. The Issue
During a long stretch of time, from 1880 to 1996, the Federal Government of Canada pursued a policy of separating Indigenous children from their communities, bringing them together to live in residential schools. Catholics as well as Christians of various denominations ran these institutions. They were located in very bad environments, the education given consisted simply in memorization, and heavy loads of work at the school were imposed on the children, with the result that their right to an education was extremely restricted. They were not allowed to use their native languages and were cut off from their Indigenous cultural customs. Moreover, they were also victims of physical, psychological, and sexual abuse.

As a result of such policies, Indigenous people were isolated from their communities and their culture was destroyed. The assimilation policy, intended to separate children from the “bad influence” of parents, forced them to assimilate the thinking and customs of white people, with the enlightenment of Christianity and in an imperialistic context.

In fact, such policies are to be found not only in Canada, but also in Australia, Sweden and so on. Sweden had conducted education for children of sami, the ethnic group in the northern region, separating them from their community. The film entitled “Sami Blood” (2016) portrays the story of a sami girl. Students were strictly forbidden to use the sami language and, if they did so, they were punished. Christian education was imparted, and there are scenes in which students were having their bodies measured and photos taken of them naked. Residents near the school used abusive language toward them and assaulted them. The film’s hero ran away from the school and tried to escape from the suffering caused by assimilation.

Due to lack of space, and the fact that the issues discussed are complicated and extensive, I will continue here with topics about relationships and their restoration between victims and those who injured them, according to the final report of the Truth and Reconciliation Commission of Canada (TRC), which organized research and the reconciliatory activities of residential schools. This report will present the historical outline of policies concerning Indigenous people, with a focus on the implications of reconciliation. Many other important topics are reported in the final TRC report, but it will be impossible to report on them here. 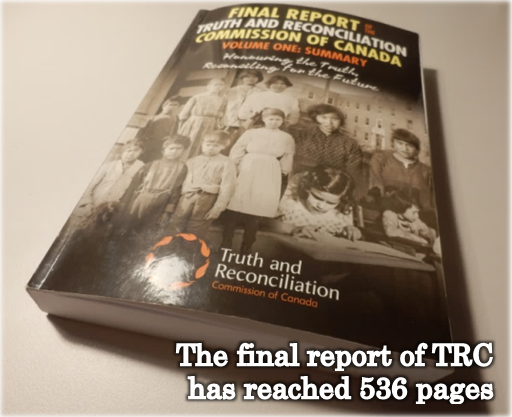 2. Canadian Indigenous Rights and Reconciliation
(1) History of Residential Schools
It is said that the first document which proclaimed the shift in Canada’s Indigenous policy was the so-called “White Paper” of 1969, which was published during the tenure of former Prime Minister Pierre Trudeau, father of the present Prime Minister. It was clearly stated that Indigenous people whose rights had been restricted enjoyed the same rights as other citizens. Confiscation of their land, forced suppression of their culture, and various other kinds of abuse were officially declared erroneous, and when legal amendments and compensation were later implemented, such factors were taken into consideration. 130 residential schools, with 150,000 students, were among the recognized policy errors. A few of these still existed in the 1990s, but most of them had been closed during the 1980s. 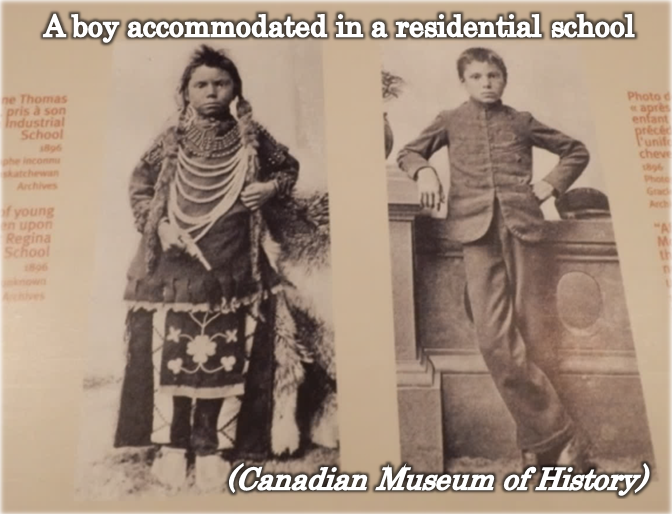 In 1996 a change in Indigenous policies proposed by the Royal Commission was being discussed. Later, in 2008, under the Indian Residential Schools Settlement Agreement, the TRC was established. The TRC was mandated to: (a) reveal to Canadians the complex truth about the history and the ongoing legacy of the church-run residential schools, in a manner that fully documents the individual and collective harm perpetrated against Indigenous peoples and honors the resilience and courage of former students, their families, and communities, and (b) guide and inspire a process of truth and healing, leading toward reconciliation within Indigenous families, and between Indigenous peoples and non-Indigenous communities, churches, governments, and Canadians generally. The process was to work to renew relationships on a basis of inclusion, mutual understanding, and respect (TRC 2015: 23).

In order to implement these objectives, regional meetings were held, where people shared their views and actions were taken. Indigenous students of former residential schools were given opportunities to express their past experiences. In addition, panel discussions were organized and opportunities were given for them to manifest their Indigenous culture. Educational institutions also organized discussion events together with Indigenous people. The TRC promoted programs of reconciliation among various different groups, without waiting for TRC’s conclusions to be drawn. As a result, exchange activities among youth, social gatherings of children and so on with Indigenous people to make their voices heard were also organized. In the year 2015, residential school personnel, Indigenous people, the Prime Minister and others concerned met together with to hold their final conference before disbanding.

Apologies for residential schools were instrumental in establishing new relationships. Religious organizations that had run residential schools offered public apologies at various times. The United Church had already apologized in 1986, and then the Anglicans and the Presbyterians in 1993 and 1994 respectively. As for Catholics, religious organizations which were running residential schools apologized at various times. In 2008 the Prime Minister, the political parties, and leaders of the House of Commons, and in 2004 the Royal Canadian Mounted Police publicly proclaimed their political errors.

(2) Reconciliation Process. Difficulties and Hopes
The TRC defined “Reconciliation” as follows: (a) Establishing and maintaining mutually respectful relationships between Indigenous and non- Indigenous peoples. (b) In order for that to happen, there has to be awareness of the past, acknowledgement of the harm that has been inflicted, atonement for the causes, and action to change behavior. It is said that the relationship is not a mutually respectful one. But we believe we can get there, and we believe we can maintain it (TRC 2015: 6-7).

During the meeting of the TRC it was quite moving to hear the stories of students who had survived the abuses received during their stay at the residential schools. There were frictions between students and school representatives. When one Catholic priest, principal of one of the schools, remarked that “it (the school) wasn’t a perfect situation,” but “…provided as much as possible a safe loving environment for the children…” survivors and their parents demanded that he should “tell the truth.” A former student, reacting to the priest’s statement, said: “That principal was most likely in his office, not knowing what was going on down below.” “I don’t want to open those doors because I don’t know what it would do to me.” She added, “I’ve started on my healing journey.” The survivors had started speaking out about their experiences involved in this process in the presence of other people. School personnel came to realize their past mistakes, but they found it difficult to listen to remarks by former students. The TRC upheld the former students’ right to tell the truth and opposed any underestimating of this right. There was need not only to disclose the facts but also to include them in their final statement. The TRC also insisted that “without truth, justice and healing, there can be no genuine reconciliation.” And reconciliation is meant not only to close a sad chapter of history but also to open up new healing pathways of reconciliation that are forged in justice and truth.

Actually, the TRC has been disbanded in Canada, but this does not mean that the issues are no longer newsworthy. Reconciliation still continues to be sought. The mass media often take up these issues. As already mentioned, continuous attempts at reconciliation are being made.

Lack of space prevents me from taking up more in this article, but Japan too has issues concerning discrimination or abuse between the government and victims of such discrimination both in Japan and abroad. Even if there is a desire for reconciliation, it is impossible to resolve these issues at present. It can be said that one factor is that the process of reconciliation in Japan is not integrated as it is in Canada. In Canada there is an awareness that an integrated process of reconciliation consists in investigation, establishment of an atmosphere for reconciliation, guarantee of victims’ statements, declaration of prevention of recurrence, continuous monitoring, government declaration and so on.

3. The Canadian Jesuit Provinces and Reconciliation with Indigenous People
Canadian Jesuits, now divided into French Canada and English Canada provinces, will be united into one province in 2018. The English Canada province issued a public statement at the 2013 meeting of the TRC with regard to the running of residential schools in the past and apologized. Former students praised not the Jesuit schools, but the excellent activities by their strength. Based on that declaration, the English Canada province inaugurated lectures for studying the history of Indigenous people at the Jesuit-run Regis College in Toronto. It also established programs for Jesuit scholastics to have opportunities to study the history of Indigenous people and share their suffering.

One scholastic, together with First Nation Peoples, which are one group of the Indigenous people, and non-Indigenous people, will travel by canoe 800 km downriver this coming summer on the occasion of the 150th anniversary of Canadian confederation. He intends to make use of this experience to promote reconciliation, understanding, and mutual dialogue. Such attempts are creative and challenging. They promote understanding and systematic action. Both Canadian provinces have a long history of social apostolate. The French Canada province runs the “Centre Justice et Foi” and publishes Relations, a well-known magazine on the book market. Their social awareness with regard to social justice is basically different from that in Japan. 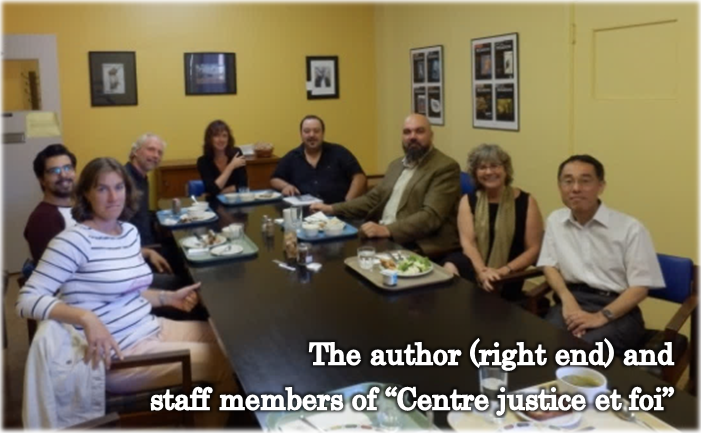 In conclusion, during my stay in Canada in the year 2016, I had the opportunity of coming to know social realities in that country. I am grateful to all the people concerned. In spite of my language limitations, their patient acceptance provided me with various basic hints for the future. I am deeply grateful for that.