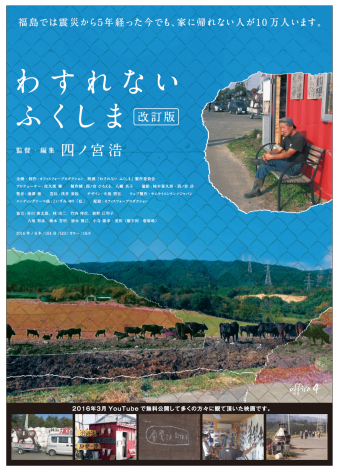 I am a teacher at Rokko Junior and Senior High School in Kobe run by the Society of Jesus. I cooperated in the production of the documentary film “Fukushima: We Won’t Forget,” directed by Mr. Shinomiya Hiroshi. In the film, we portrayed Iitate Village in Fukushima Prefecture, which continues to be evacuated as of February 2017, due to the families who have fled from there because of the nuclear plant accident.

For a long time, some of us were convinced of the usefulness of nuclear energy for peaceful purposes and accepted nuclear power generation, but I now have doubts about this way of thinking.

A Christian who was involved in an opposition movement against the Genkai Nuclear Power Plant in Kyushu once told me that one reason why the Catholic Church of Japan has not been so active in the opposition movement against nuclear power plants might be due to the fact that the Vatican has not yet totally rid itself of the idea that nuclear energy is useful for peaceful purposes. Therefore, I thought all the time of dedicating this film to Pope Francis, so that Vatican authorities would come to know a little about the suffering of the victims of nuclear plant accidents.

There are two reasons why I decided to cooperate in the production of this film, “Fukushima: We Won’t Forget.” The first reason is that I sympathized with the impassioned thought of this film’s director Mr. Shinomiya Hiroshi.

I had previously gotten to know him during a certain event at my school when we showed of one of his documentaries, which featured children living in a dump site in the Philippines. Just after the outbreak of the East Japan Great Earthquake disaster, he rushed to the stricken area and started filming, partly because he himself was from Sendai in the same area. At that time, he asked me to cooperate in the production of his documentary, in which he wanted to focus on the earthquake disaster. Sympathizing with his impassioned talk about how important was to enter quickly into the stricken area after the earthquake and to take pictures with proper equipment, I decided to cooperate with his filmmaking.

There were also other directors like him who entered the stricken area just after the earthquake and began to shoot films. But I heard later that, just when they were going to film the victims of the nuclear plant accident, their sponsors suddenly left them and they were forced to give up filming for lack of funds. Therefore, as for most of the documentary films of the East Japan Great Earthquake disaster, the majority have been produced by personal home videos.

The second reason comes from special thoughts I had of my mother, who had passed away shortly before the Great Earthquake. My mother had experienced all three big disasters that hit Kobe—the Hanshin Flood of 1938, the Kobe Air Raids of 1945, and the Hanshin and Awaji Great Earthquake disaster of 1995. At the time of the 1938 flood, the city area was buried under earth and sand and debris from the landslide that killed many people. In 1945 Kobe City became a sea of flames caused by an incendiary air raid that killed or wounded 150,000 people. At the time of the 1995 earthquake, our house was partially destroyed and we had to live for a long time without gas, water, and electricity. Compared with life outside the disaster area, we experienced a sense of isolation.

During her lifetime my mother, who had many similar painful experiences, used to grieve over how difficult it was for people who did not experience such disasters to share the suffering of others and deplored how quickly their interest in the victims faded away after the disasters.

Just after the death of my mother the great earthquake hit East Japan and the nuclear plant accident in Fukushima also occurred. Watching the news, I saw that many towns were destroyed in the earthquake and tsunami, the fields of the villages evacuated by their inhabitants became totally devastated by radioactivity, and the life of the villagers and their human relations were gradually destroyed.

It looked to me as if the three disasters that my mother experienced were happening again all at the same time. If my mother had seen this sight, what would she have thought? My mother would surely have told many people about the serious situation of the victims and would have tried not to forget about their great disaster. That is what I thought and so I made up my mind to cooperate in the production of this film.

This documentary portrays the life of families who left their village due to the radioactive contamination and of those who stayed to take care of their cows in the contaminated village. I interviewed the bereaved family of a dairy farmer who had drawn up a will before committing suicide, saying “If only there were no nuclear power plants.” I also raised the issue of family collapse caused by the nuclear plant accident. However, on the whole, this is not a film offering a strong image of zealous movements against nuclear power. Rather it could be called “a soft anti-nuclear film.” 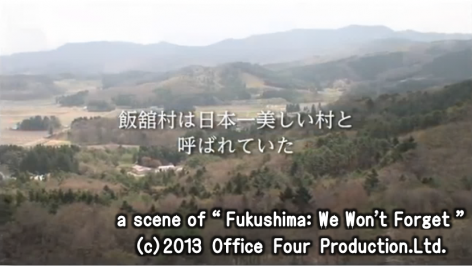 Iitate Village has been called “the most beautiful village in Japan.” Although the village has been polluted from the nuclear plant accident, radioactivity is not reflected in the film. It may be said that the film itself shows that the beautiful scenery of this town has remained. However, the people of Iitate Village have lost it as their hometown, the basis of their livelihood and family ties, because of invisible radioactivity. The tragic situation of the nuclear plant accident will surely touch people who watch this film simply because of its quiet scenes.

Among the families covered by this film, there is the family of a Filipina housewife. Director Shinomiya has previously produced documentary films about children of Philippine slum areas, and he is internationally famous. 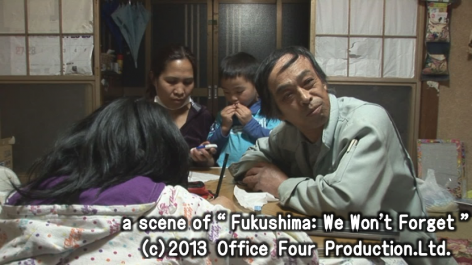 However, at the outset he was not thinking of covering a Filipino family.

In fact, he entered the stricken area for filming immediately after the earthquake and at first looked for people who would accept being filmed, but he had difficulty finding any. Finally, it happened that a family with a Filipina wife agreed to be filmed.

I did not present the director with any special conditions concerning the contents of this film. However, I thought I would like to portray in this film the existence of victims who wish to be forward-looking even in such a tragic situation. “Trying to find hope even in the midst of sufferings” —isn’t that a truly Christian way of life? I thought that the Filipina wife, who is full of life without being depressed, might offer some hope to viewers of this film.

My only request to the director was that I wanted the song “Rainbow” to be included. It is a song meant to encourage a person who has lost all because of the tsunami. Instead of saying “you should do your best,” it offers encouragement. “Let’s look up together at the sky and see the rainbow of hope.”

As time languished, what I have accomplished
leaves my hands far, far away.
I remained standing without words,
my cheek humid just as rain drops.

After the rain stops, let’s trace
a seven-color sash hanging in the sky.
Beyond tears, a sign of hope
reflects tenderly in your smiling face.

A valuable trusted friend
gone far into the clouds cannot be met again.
I remained standing up, tears dried,
my eyes closed in the midst of the wind.

A seven-color sash in the middle of your heart—
let’s portray it quietly by yourself.
Remember! The wide sky
is always embracing you.

(Lyrics and music by Koizumi Yuri)

The scene that touched me most deeply in this film was when the children of a family being interviewed are moving forward under the blue sky, riding against the wind on the back of a truck. Among the victims of the nuclear plant accident, children particularly are exposed most severely. And yet children have no other way but to continue striving to move forward. I suspect that people watching this film might feel saved especially through this scene. 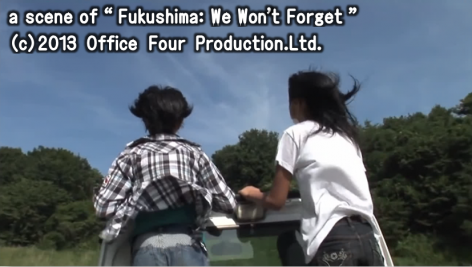 Around the same time there was a plan to show this film “Fukushima: We Won’t Forget” at a Christmas gathering of a Protestant church in Iwaki City. Because of my cooperation in the production of the film, I went there. Unfortunately, the showing of the film did not take place. According to residents, the reason was that it seemed to be very difficult for the inhabitants to watch this film while the vivid memories of the earthquake were still alive within them.

Anyway, they had a Christmas concert and listened to “Rainbow,” the ending theme song of the film. It was impressive to observe the people attending the concert filled with tears on listening to the song. I hope the day will come when the victims can also watch this film. All the people I met in Iwaki-City said to me, “Please never forget the victims of the earthquake and the nuclear plant accident.”

Six years have passed since the East Japan Great Earthquake. Are we accompanying people who are still suffering from the nuclear plant accident? Or have we forgotten them?

There is an interparty group of Diet members discussing support for the earthquake-stricken area, but according to media reports, the number of participants in their meetings seems to have significantly decreased recently. Again, during the 2017 memorial service for the March 11 earthquake disaster, the word “nuclear plant accident” disappeared from the memorial words of the Prime Minister. The victims of the nuclear plant accident are surely going to be forgotten in the world of politics.

I hope everybody will have a chance to watch this film and I ask everyone not to forget the victims of the nuclear plant accident. This is my earnest wish.