At the end of last year, while we were holding a seminar at Tabiji-no-Sato for high school students, an activity so dear to Fr. Susukida, we heard that his health was declining. The appearance and strong voice of Fr. Susukida talking to students about the realities and history of Kamagasaki are still vividly remembered after his death.

When I first went to Kamagasaki to work there, I was welcomed by Fr. Susukida, several young people, and two cats. Fr. Susukida often sat at the same place at the dining table in the small kitchen and introduced me to people coming in one after another. I exchanged greetings with many persons, but so many continued to come in that I was not able to remember their names, faces, and relationships. Every day I met with many, mainly young people, but, with regard to my job Fr. Susukida would only provide me with essentials, without being specific about what to do. He was already interested in social problems and actively participated in gatherings and trials. He often spoke passionately about poverty and the problems of day laborers, so I learned much from him. At the beginning I was quite confused, not knowing what to do and, although I was left to myself, I gradually grew with time and was able to accomplish what I thought needed to be done in Tabiji-no-Sato and the Kamagasaki area. Fr. Susukida did not give me any advice or show any discontent, and when I was in trouble not knowing what to do, he always encouraged and consoled me.

Tabiji-no-Sato was established in the early 1980s by Fr. Susukida. Since then it has continued to be an active force in Kamagasaki and, when people who had been accustomed to visit the place during their younger years heard the sad news of his death, they remembered him. Here are some of their remarks. “For people that were young at the time, including myself, Tabiji-no-Sato, where Fr. Susukida lived, became a haunt for us to gather together. I recall Fr. Susukida’s great heart, and because this place existed, I think I have been able up to now to be concerned with Kamagasaki.” “Fr. Susukida is still in my heart, which I realized on hearing of his death.” “Remembering the lifestyle of Fr. Susukida, who accepted us as well as the town of Kamagasaki, I want to continue my involvement with this region.”

Recalling what Fr. Susukida said, everyone admires his generosity and freedom of heart. While working with him, I realized that his original idea for Tabiji-no-Sato was to foster exchanges among people visiting the place. He felt very happy talking to young people and they considered him their father, so much so that his great love for them still remains in their hearts. The activities of Tabiji-no-Sato are concentrated mainly in Kamagasaki, and I believe that the institution is still working freely with the same open spirit.

Fr. Susukida lived in Kamagasaki for 16 years. I worked with him during his last 5 years there. It is now 26 years since I came to Kamagasaki. I live in Kamagasaki because he accepted me here. Fr. Susukida introduced me to many persons with whom I am still working. I am even more strongly conscious of that now that he has passed away.

Fr. Susukida, I received everything from you. I am grateful to you. We feel lonely and sad at bidding farewell to you. Remember to protect Tabiji-no-Sato from heaven. 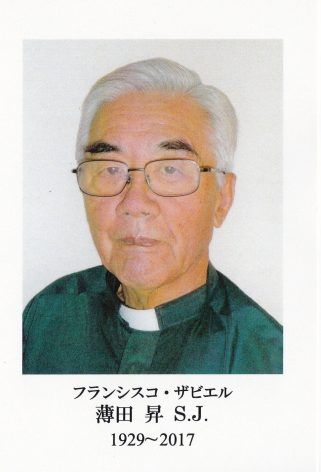 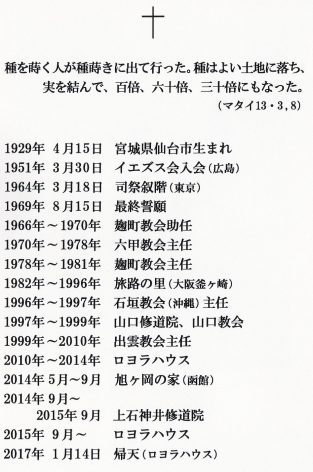