The Congregation Proceeded through Three Stages
From its opening on October 3, 2016 to its close on November 12 the Congregation featured three main high points.

The first high point was the election of the new General. After personal conversations among the participants, Venezuela-born Fr. Arturo Sosa was elected. Since 1965, the three previous Generals, Frs. Pedro Arrupe, Peter-Hans Kolvenbach and Adolfo Nicolás as well as the new General had been elected from non-European Provinces. This shows that also outside Europe there is vitality in the religious organization of the Society of Jesus. 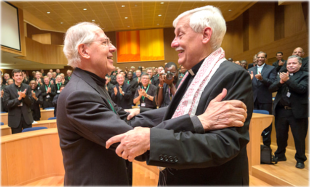 The second high point was the visit of Pope Francis. This time the Congregation did not go to visit the Pope but the Pope himself came to the General Congregation. He made three requests of the participants—to pray eagerly for consolation, to ask the Lord nailed to the cross to move their hearts, and to be guided by the Holy Spirit in order to do their best. 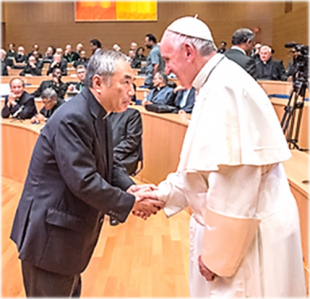 I want to touch here on the second request, to look for a change of heart while facing the cross. In other words, faced with the suffering of Christ on the cross and of most people in the world, our brothers and sisters, where Christ is present, we are to ask for the grace of having our hearts changed. The Society of Jesus is present where there is suffering. The Merciful Lord, who has looked on and chosen us, has sent us to those nailed to the cross in the world, the poor, the sinners, the rejected ones, those suffering from violence and injustice, in order to cooperate with Christ in the fruitful results of his mercy.

Fortified by our experience of having been healed of our individual and community wounds by the Lord, we are invited to have the courage to open our hearts to the unbearable sufferings of our brothers and sisters, to learn from them how to assist and accompany them generously.

The third high point came with informal meetings, when we heard reports from members and coworkers of the Near East Province concerning Syria. Our hearts turned to world conflicts and wars, with the result that we produced a decree not previously envisioned.

Decrees
The main decrees of the 36th General Congregation are “Companions in a Mission of Reconciliation and Justice,” “Renewed Governance for a Renewed Mission,” and “Witnesses of Friendship and Reconciliation,” besides a request to Fr General urging the safety and protection of minors.

The view of the Congregation with regard to “Companions in a Mission of Reconciliation and Justice” is based on the autography of Ignatius during his stay in Venice in 1537. Ignatius and his companions, making a spiritual retreat, maintained their unity despite being dispersed in small groups. They lived in strict poverty and served the word of God. Their life style serves as the basic model for our Society today.

The 36th General Congregation discussed the call of the Eternal King in accordance with postulates sent by the provinces. The most basic Jesuit mission is “Our duty of service to reconciliation” (2 Cor 5:18). That service consists of three dimensions.

The first call of the Eternal King is to the service of reconciliation with God. That comes from the joy and hope of having met Jesus. The Church needs to be renewed in order to remain loyal to that service. Ignatian spirituality, and especially discernment, is very helpful to this end. In a secularized world where people abandon religion, thorough discernment is required in order to proclaim the joy of the Gospel especially to the younger generations and to look for ways to participate in religious dialogue.

The second call is to the promotion of justice and peace. Our world is full of refugees and migrants. Many people suffer from discrimination. The poverty gap is on the increase and youth as well as vulnerable people are victims of oppression. The first thing asked of us is to learn from them and, in that learning process, to find out how to support them. Again, we notice situations of war all around the world. It is constantly demanded of us to look for paths to peace through analyzing the causes of conflict.

The third call is to reconciliation with creation. Reactions to the Holy Father’s Laudato Si’ are at the backbone of this reconciliation. At present, the environmental crisis is at the frontline, but this is at the same time deeply connected especially with poverty and exclusiveness. To heal a broken world, keeping our eyes firmly fixed on God’s creation, we need to make sweeping reforms in how society has been built.

With regard to a “New Mission for a Renewed Governance,” discernment, collaboration, and networking were mentioned as the actual way of proceeding in keeping with contemporary issues concerning governance. In our fragmented and divided world, these characteristics are very important in order to make the apostolate effective as a multicultural and international organization. As a result of true discernment with a global vision, it is possible to hold a communal vision in society, to select suitable missions, and make plans to accomplish them. On the other hand, collaboration does not concern only those working in our institutions. It also extends to people we work with in order to promote justice and the service of faith in communal discernment. It is important to make common decisions together, to accomplish them together, and to evaluate the processes together. Networking has developed at several levels, among provinces, works, and apostolates, through the use of new communication techniques. Leaders with vision are needed for further improvements and consequently we must train them. In the last part of this decree, superiors and provincials are requested always to have global-level vision, and provincials are asked to work together at the regional levels.

The decree “Witnesses of Friendship and Reconciliation” points to the actual conflict situations in Syria, South Sudan, Colombia, the African Great Lakes, Central Africa, Afghanistan, Ukraine, and Iraq—with the horrible picture of poor and starving populations. Jesuit members and collaborators who serve at the frontline have been especially affected. In this decree, the members of the Congregation manifest their solidarity and grateful affection, expressing the determination to work for justice and peace.

In relation to matters concerning the protection and safety of minors, the Congregation recommended that Fr General cooperate with provincials to promote the safeguarding of minors inside our Society and our Jesuit apostolates, through training and community life. 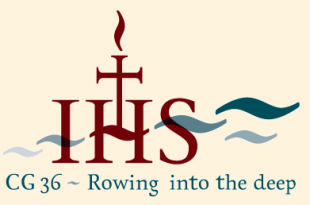 The above is a report on the Congregation. I consider the priorities for the Province I published a year ago to be in full consonance with the spirit of this General Congregation. I insert them here thinking especially of non-Jesuit readers.

Some policies regarding implementation:
—All Jesuits, in our current parish apostolate and educational apostolate, should bring these three priorities to bear adequately on their work.
—When carrying out these priorities, we should always have an eye to partnership on an equal footing with lay people and our collaborators.
—We should discuss and implement programs and financial support especially to form the leadership needed for the next generation of lay people.
—While promoting vocations within Japan, we should also continue to ask other provinces to send missionaries to the Japan Province.