Participating in the 36th General Congregation of the Society of Jesus

The 36th General Congregation of the Society of Jesus was held at the Jesuit Headquarters in Rome, and it extended for a period of six weeks, namely from October 3rd to November 12th. The Japan Province was represented by the Provincial Fr. Kajiyama, and myself. The principal task of this Congregation lay in electing a successor to the Superior General Fr. Adolfo Nicolás, and in setting guidelines for certain vital issues.

Reflecting back on the Congregation, I must admit to experiencing a deep feeling of unity concerning the Society of Jesus, and I realized also that the focus of our Jesuit mission, namely the “Proclamation of Faith and Promotion of Justice” as enunciated by the 32nd General Congregation (1974~75), has now grown firmly entrenched as a collective awareness throughout the Society. In private audiences with congregation members, I noticed that on questioning people regarding the social apostolate in their respective provinces, the Latin Americans all replied that they were in one way or another working on issues linked to the social apostolate. This is something I vividly recall hearing. In fact, the election of the new Superior General, Fr. Sosa of Venezuela, was conducted in such a smooth manner, that I felt convinced that not just in Latin America but in the entire Society of Jesus as well, this type of social awareness is indeed taking root.

The 36th General Congregation may be summed up in the words of Fr. Sosa, namely “Our discernment at the Congregation is to view the world as the poor do, which as an outcome enables us to live in solidarity with them.” The thrust of our mission is to proclaim the Gospel of reconciliation to a world divided and injured, teeming with refugees, religious conflicts, and poverty, and to admit objectively our own limitations and powerlessness. Ignatian discernment is a crucial key to answering God’s call. In his address to the Congregation, His Holiness Pope Francis stated that through discernment we work with Christ crucified, and sustained by the Divine Solace, and as a response to this the Congregation promulgated the Decree entitled “Identity – Mission – Community,” which leads to deeper mutual understanding.

A special message of support for Jesuits and collaborators who are continually risking their lives in Syria and other regions of military conflict the world over was approved by the Congregation, along with a proposal to Fr. General that addresses the issue of abuse of the vulnerable. Many delegates were impressed by the fact that the Congregation displayed such a spirit of concord despite regional differences, and the Society of Jesus, as a community working with others and strengthening networks, is at the service of the Gospel of reconciliation. The directives of the General Congregation focus on the content of the Society’s mission, not just with reference to our own members but also others with whom we work. I request your prayers and support, in order that all of us who are linked to the Jesuit Social Center, may advance together. 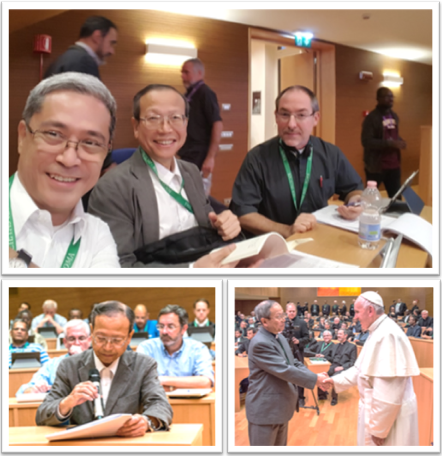