Towards Collective Action: A Buddhist View of Laudato Si

The Papal Encyclical Letter Laudato Si by His Holiness Pope Francis entitled On Care for Our Common Home issued on May 24, 2015 has been hailed by many as a radical and groundbreaking document for the wide scope of issues that it encompasses. Indeed, His Holiness does not offer a simplistic portrayal of environmental issues and an admonition to be more ecologically minded. His Holiness has rather stood courageously and with great insight to link our ecological crisis with the deeply interconnected problems o 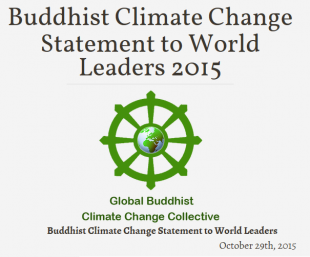 f our economics, politics, and culture. Buddhists have also in recent years been engaging in the problems of our global ecological crisis, both with on the ground of environmental activism and with a large number of books on Buddhist perspectives on the environment. In response to the landmark publication of Laudato Si, Buddhists have also drafted their own joint declaration on climate change and the environment (https://gbccc.org/buddhist-climate-change-statement-to-world-leaders-2015/).

From a Buddhist standpoint, especially with a socially engaged Buddhist standpoint, there are many areas of common insight and agreement with Laudato Si, such a valuation of the earth and the self being vehicles for our liberation (#98), the interdependence of all things (#86), a deep compassion for all sentient life, which is so intimately connected with ourselves (#89), and the eradication of greed, anger, delusion through a sense of sufficiency and simple living (#9). His Holiness, however, does not stop with the locus of the problem at the individual level. From the very beginning of Laudato Si, His Holiness speaks deeply about “eliminating the structural causes of the dysfunctions of the world economy and correcting models of growth which have proved incapable of ensuring respect for the environment” (#6).

From a Buddhist standpoint, one of the most striking and outstanding aspects of Laudato Si is His Holiness’ constant emphasis on social justice. In general, Buddhism has been greatly lacking in such an awareness of the problems of the larger forces of society on individuals and communities, believing that karma determines one’s larger fate in life and delivers a kind of natural justice. In its most extreme form, Buddhists may understand suffering as deserved from some mysterious karma of a previous lifetime and that this suffering must be endured as a penance for the bad actions done in the past. This kind of understanding has been applied to explain the plight of the poor and the fortune of the rich, the misfortune of the physically disabled, and especially the inferiority of women. Fortunately, over the last few decades the emergence of the socially engaged Buddhist movement has marked an increasing awareness of Buddhists towards social justice issues, such as our environmental crisis.

While Buddhists have much to learn from Christians concerning social justice, I think there is a reciprocal learning in which Christians can deepen their understanding of environmental justice from Buddhists. In Chapter III, Section III of Laudato Si, His Holiness speaks at length on the “crisis and effects of modern anthropocentrism” and makes a wonderful and powerful repudiation to the modernist impulses which came out of the Christian West that are responsible in many ways for the problems we are facing today. He then draws two conclusions to remedy this situation, which are 1) we need “a Father who creates and who alone owns the world” in order to practice proper self-restraint with our human creative powers (#75); and 2) we “cannot be expected to feel responsibility for the world unless, at the same time, their [our] unique capacities of knowledge, will, freedom and responsibility are recognized and valued” (#118).

A Buddhist approach, however, would go about this in a different way seeking to develop self-restraint and responsibility by appealing not to an anthropomorphic authority who lords over us but rather to a more natural inner impulse that comes forth from our total interdependence with the natural world, which is indivisible from the creative power of the whole universe. The great Thai forest monk Buddhadasa Bhikkhu (1906-1993) offers these insights: “It is important that our conservation efforts be beneficial, correct, and genuine. This raises the question of what kind of pow 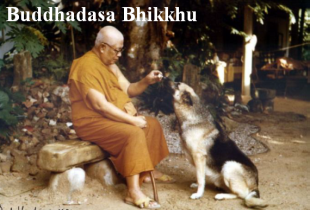 er or authority is to be used for the sake of conservation. The power which directly forces people to do our will is one kind of authority. Yet there is also the power of creating a proper understanding of reality such that we see our duty clearly and carry it out willingly … Dharma is the ecology of the mind. … The Dharma has arranged everything quite well already, in its natural ecology, but we don’t appreciate this wonderful fact at all. … When the mental Nature is well conserved, the outer material Nature will be able to conserve itself.”

The key point that I am trying to emphasize here is that it continues to be an up hill battle to convince people to act for the benefit of the environment using moral exhortations for self-restraint and responsibility for other life forms. Ultimately, I think His Holiness has a very similar understanding of mutual love and care, but the anthropomorphic appeal I think can be misunderstood by those of less insight than His Holiness.

Having looked at ways that Christian and Buddhist understandings on the ecological crisis can augment each other, I would like to finish with clearly the most essential issue of collective action. Indeed, His Holiness speaks directly to this need to shift from well meaning individual actions on behalf of the environment to a major collective thrust needed to face this issue. I think a step that needs to be taken is an emphasis on the collective power of religious communities on local and regional levels to enact lifestyle shifts that take on greater impact because they are practiced on a social level. If you consider the existence of a temple, church, mosque, or some other religious facility in the majority of communities all over the world, the power of each of them acting along the line of an ecological gospel, as His Holiness and other concerned religious leaders have articulated, would be transformative, as well as offering a power check on the destructive forces of our global economic and political order.

The International Network of Engaged Buddhists (INEB), with which I have worked for over 25 years, is trying to develop such movements through the Interfaith Climate and Ecology (ICE) Network formed in 2012 through education, advocacy, networking, pilgrimage, and developing eco-temple communities. ICE’s Eco-Temple Community Working Group, with which I am closely connected, has emerged from the vision and activities of Rev. Hidehito Okochi of Japan in his efforts since the early 1990s to create a nuclear free Japan and to develop environmental awareness in his own community. The Eco-Temple Community design system is a holistic development process that involves much more than simply putting solar panels on the roofs of temples. This fledgling network has already established partnerships with temples in China, South Korea, Myanmar, Thailand, Sri Lanka, India, and Japan, supporting the expansion of solar facilities and the implementation of a variety of ecological construction methods.

In conclusion, it is with great gratitude that His Holiness Pope Francis, as one of the foremost religious leaders in the world, has spoken so deeply and eloquently about these issues, and we hope that the courage and vision he exemplifies in Laudato Si will inspire other such leaders, especially those in the Buddhist world, to do the same.