Becoming a Bridge between Japan and Korea

―Cooperating in the Social Apostolate Makes this Dream Come True―

If asked about when it happened, my answer most probably would be one winter evening five years ago in Shimonoseki. Using my free time inbetween work, I started studying the Korean language. I decided to go to South Korea. Being Japanese, I felt compelled to go to Korea to help repair the negative history of Japan and try to build up new Korean- Japanese relations. For some time I prayed that the wounds of the former military “comfort women” (Halmoni) would resonate deeply in my heart.

My prayer was heard. Last year I spent seven months learning the language, and three months already have passed since I started to work in the social apostolate of the Korean Province. Searching for ways of reconciliation between both countries, I now feel called to work for closer cooperation between Korea and Japan. The road to reconciliation is endless. While confronting each other along the journey, can we not continue to move forward together? Will not the start of a new history come about by determining to proceed together in healing a broken world and those wounded within that world?

I decided to share with the readers of this Bulletin some bright prospects for mutual efforts between Japan and Korea, which I have experienced in daily contacts through my hesitant knowledge of the Korean language, even though these may seem like a mere drop of water in a vast ocean.

Facing a Giant Military Base 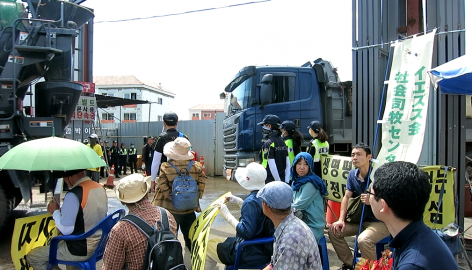 While visiting Gangjeong village in Jeju Island in September last year, I took a taxi. During my conversation with the taxi driver he asked me, “Why do you want to go to Gangjeong village? Only priests and nuns go there. It seems like they pray in front of the military naval base, but there’s little meaning in doing that when the construction of the base is so advanced. Don’t you think so?”

This is most probably partly true regarding the peace movement in Gangjeong. The residents of Jeju Island themselves are not so interested in the issue, since they are not directly affected much by the naval base construction, and they are not serious about non-violent peace movements.

People there are not aware of the bad effects and the meaninglessness of constructing a naval base on the island. If this is true of the islanders, others living on the mainland will neither care about nor find meaning in this peace movement. There are many similar historical facts common to Okinawa and Jeju Island. These islanders have been victimized by their own countrymen.

Last September I visited Gangjeong again. The huge naval base had already been built, and part of the beautiful seaside landscape was unrecognizable. Nevertheless, activists continue to hold demonstrations against the base outside the main gate. While the base was being built, the Jeju Diocese opened the St. Francis Peace Center and gave clear testimony of its attitude opposing the base.

People who visit Jeju Island will think, “The base has been built. What is the meaning of continuing an opposition movement?” I could not find a clear answer. What kind of hope can we find in the face of such great evil? But, without any doubt, the answer will come from a common Japanese-Korean collaboration.

Drawing common dreams – A Walking Pilgrimage with the banner (in our hearts) “Peace in the World without Nuclear Energy”
During the second half of September I participated in a pilgrimage for denuclearization starting from Busan. A small exchange program for denuclearization between Japan and Korea which began in Shimonoseki five years ago was organized this time by the Japan Catholic Council for Justice and Peace and its Korean counterpart. Nuclear plants have been built along the east coast of Korea from south to north. The walking journey had the aim of visiting groups of people opposing the construction and maintenance of these plants.

I still remember painfully now our visit to the tent of people opposing the Wolseong nuclear plant. The Japanese group reported on measures taken after the nuclear accident at Sasayama (Hyogo Prefecture). It was very painful to observe the face of a mother who, while interested in the issue, found herself hopeless in her struggle. “I had never even imagined that the local self-governing group was distributing iodine stabilizer pills to the residents.” Even though worried about her children’s health, she could not leave the village because she could not find any other place to live. Nevertheless, hearing that there were also people in Japan in similar situations, she said she felt encouraged. We advised her to join in international networks. The helpless feeling of not knowing what else to do still haunts me. In reality, how can we organize a network that will continue to interact with people suffering in difficult frontlines in Korea?

The walking march to Samcheok took three hours. I walked along together with a father of two cute children. We sang Korean songs and became friends. He had helped oppose a project to accept nuclear waste, as a result of which his life was threatened by a group approving the plan and he had to go into hiding. What he told me impressed me deeply. The city of Samcheok strongly opposed the construction of the nuclear plant that the government was enforcing there. I was greatly surprised and encouraged to see the mayor of the city come personally, during our pilgrimage, to thank and encourage us. In the center of the city there was a big banner welcoming our group. 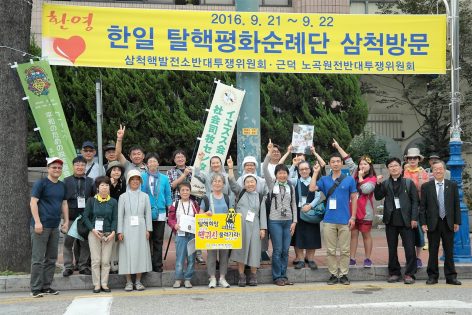 Ms. Okumichi, a woman who had come all the way from Germany, was sitting beside me on the bus and I was happily able to share some conversation with her about the past, present, and future of Japan. She said “You have to dream.” Certainly, dreams have guided me a long way so far. Nevertheless, I remained skeptical with regard to the possibility of implementing a “Non-nuclear World of Peace,” the slogan of our pilgrimage. But I had the feeling that Ms. Okumichi and the pilgrimage challenged me to embrace a big new dream. Her conversation filled my heart with new light. “Willy Brandt, the German Prime Minister at the time when nobody imagined the possibility of a united Germany, held a clear vision of East-West peace. And, in fact, the Berlin wall came down. Japan has 43 nuclear plants. Nevertheless, after the Fukushima accident I think that only three of these are active now. What do you think would have happened if there were no people opposing them?” This was also my own experience. Dreams welling up forth from the bottom of one’s heart become true.

In his homilies during Mass, the leader of the pilgrimage, Fr. Yang Ki-sok, supported our hope step by step. He inspired us by quoting the words of Pope Francis’ encyclical Laudato Si’: “Creating a world in need of development, God in some way sought to limit himself in such a way that many of the things we think of as evils, dangers, or sources of suffering, are in reality part of the pains of childbirth which he uses to draw us into the act of cooperation with the Creator” (n.80). It is in times of crisis that solidarity becomes strong. Going to the front lines, we are able to meet with those who remain there, to the very risk of their lives. We do not have to wait for somebody to help us. When we ourselves step forward and meet others and continue our action in solidarity with them, surely change will occur. 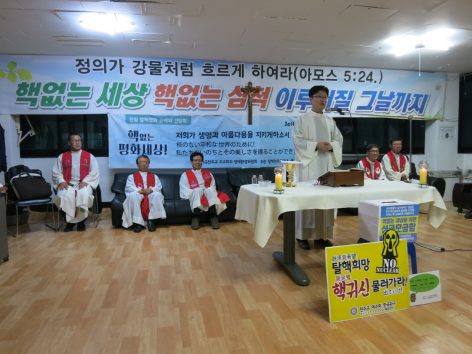 Building Bridges, Developing Nets for Peace
Certainly, in September of last year I heard the same thing. But I was able to experience “in my own skin” its true meaning while hearing it again during the walking march. I had the opportunity of personally addressing a question to Bishop Kang U-il of Jeju Island. “What is your hope in confronting the huge military base?” He answered: “The fact is that it is not back on track yet. Nevertheless, my impression is that many people from Korea and other countries have visited Gangjeong. Activists who met people here returned home with greater energy and courage. Even nowadays many people come to visit us. Small children and high school students come. Adults come. Not only Koreans but others, too, from a 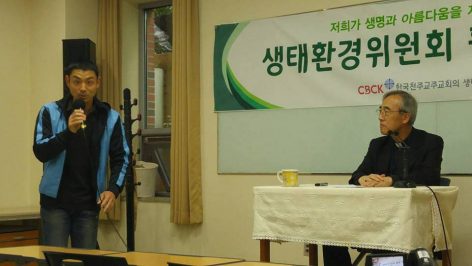 broad—Americans, French, English, etc.” The Bishop found hope in the fact that retired former American military personnel of the Korean and Vietnamese wars were aware of the meaningless of war, as are members of peace movements who come to Gangjeong, as well as many others who return home full of relief and courage.

Is it not true that such is the vision we hold for peace? Hope is found in the very strengthening of solidarity at local levels with those fighting at the forefront. Encounter groups deepen their understanding and the chain of peace surrounds and sieges the power of evil.

We must continue advancing to build networks for peace. The Jesuit social apostolate of the Korea Province has been strengthened with more members, with facilities for migrant workers, antinuclear movements, and opposition to military bases, all of which concur with the options taken by the social apostolate of the Japan Province. The implementation of such common endeavors may not bear immediate fruit. But people harboring the same resolve promote mutual exchange while remaining on the front lines and inspiring each other. Will a bridge that supports such networking not be the way for Japan to move forward and build up a new history, instead of repeating past mistakes?

October 3 was an unforgettable day for me. The week after the anti-nuclear pilgrimage I was offered the opportunity to speak at a public demonstration in front of the Japanese Embassy in Seoul to urge support for former Japanese military “comfort women,” demanding 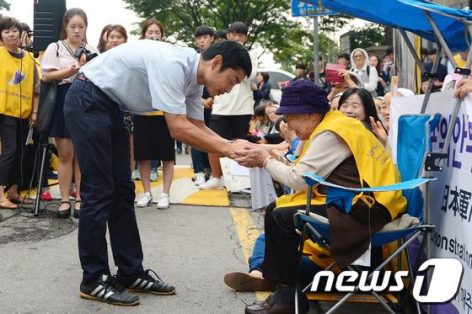 apologies from Japan. There was a word I felt I had to say to Halmoni, as a Japanese priest, no matter what. Finally I could say that word to Halmoni, “Mianamnida,” the word of apology regarding our past wrongdoings. Then I told that we, in a spirit of true friendship, want to build up together with them a new friendship for the future. They shook my hand with cheerful smiles. That was a sign of a promise to God.