Inclusion, Not Elimination – Bridges, Not Walls

At the end of July I participated in “World Youth Day (WYD) 2016” in Kraków (Poland). WYD is a worldwide youth gathering that started 30 years ago in response to the call of Pope St. John Paul II. The first WYD took place in Rome in 1985, and since then one has been held every 2 or 3 years at different sites around the world. This time, the 14th WYD was organized in Kraków, the hometown of the Polish Pope, John Paul II. Our Japanese pilgrim group consisted of 130 youth and their companions.

Before the world convention started, I had an opportunity to visit Łódź, the town where St. Faustina was born, together with the group from Claretian parishes. The Catholic Sister St. Faustina is famous because the “merciful Jesus” appeared to her. She and St. John Paul II, who canonized her, were the patrons of WYD 2016.

There is another Polish saint, Maximilian Maria Kolbe, who is very close to Japan. During this pilgrimage I had the opportunity of visiting places closely connected with St. Maximilian Kolbe, Auschwitz being the most important of these. There Fr. Kolbe sacrificed his life in place of another prisoner.

WYD, with youth from all over the world gathering in “pilgrimage,” is a Christian event commemorating the Passion and Resurrection of Christ. It is not only a site for daily prayer and Masses, catechesis programs, the Way of the Cross, and the practice of the Sacrament of Reconciliation, but also features eating, singing, and dancing with people from all over the world. The event is a tremendous gift full of opportunities for learning. I wish I could write about all my experiences there but, due to lack of space, I shall limit myself to a mere fraction of my experiences.

Is “justice” the opposite of love?
Since the canonization of Mother Teresa was going to take place on September 4, her name appeared several times in the program. Many non-Christian Japanese are familiar with her words: “The opposite of love is not hate but indifference.” However, Salesian Fr. Sato Naoki in one of his catechetical talks challenged us by saying, “Perhaps justice is the opposite of love.” By adhering arbitrarily to justice, we might act contrary to love.

Even more than in Japan, Polish television carried daily reports of terrorist and other violent incidents from all over the world—such as a man firing at people at random in Germany, a pregnant woman being assailed with a knife, and other cruel acts. Such incidents happen daily with an increasing number of victims. They affected us deeply and led us to continue praying for the victims.

On July 26, a day before the arrival of Pope Francis in Kraków, television reported his coming arrival along with a report of the assassination of octogenarian Fr. Jacques Hamel at a parish church in northern France by two youngsters seemingly linked to the Islamic State. Strangely enough, on that same day the mass media reported the massacre in Japan at the Sagamihara center for the disabled, which greatly shocked us all.

Such violence, particularly in taking human lives, bespeak acts opposed to an overall vision of what love is. In fact, the perpetrators may consider this “justice.” They were acting on what cannot be called “religion,” but on their own “principles and scale of values,” according to which the lives of those they attacked were considered “useless” and so they “had to die.” Oppressing, eliminating, and putting them to death were not considered problematic but the exact opposite. These acts were considered to be acts of “justice,” acts worthy of praise.

The unthinkable massacre at Auschwitz 70 years ago was one such tragedy for the sake of “justice” provoked by distorted logic. Whatever one may have learned from books, when one steps on the ground of Auschwitz for the first time the atmosphere accompanying that calamity is completely overwhelming. What St. John Paul II said in his “Appeal for Peace” at Hiroshima 35 years ago, “War is a human act,” crossed my mind and I could not help thinking about Hiroshima. I recalled that the dropping of the atomic bomb was considered to be an act grounded in “justice,” but the very fact that human persons are capable of committing such atrocious evil under the name of “justice” provoked frightful feelings within me. 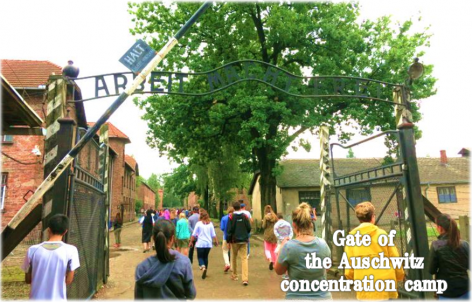 Bridges, Not Walls
Something that touched me deeply were the words Pope Francis continually repeated during the assembly: “Do not be afraid.” Out of fear and anxiety, people build walls around themselves. They attack and reject others. At first glance we seem to be living in a world dominated by fear and violence, but we Christians should not take into our hands weapons or hatred for people. On the contrary, we must intensify trust, hope, and love. I feel that the call of Pope Francis to “build bridges, not walls” and the advice of Jesus to “love your enemies” (Matthew 5:44) show clearly that these are the only way to cut the increasing chain of violence resulting from theories of hate and revenge.

On July 22, 2011, a shocking crime happened in Norway. A man killed 77 persons in just one day. It is said that his motivation was “justice” based on ideological and political principles. Since Norway does not recognize capital punishment, he was sentenced to 21 years in prison. Many people questioned the brevity of the penalty and the comfortable environment of the jail he is in.

On the 5th anniversary of that incident, the following words of someone who had had a narrow escape at that time were especially noted by the mass media: “When one man could cause so much evil – think about how much love we can create together.” Other survivors, the Prime Minister at the time, and many citizens took these remarks seriously. Confronted with such a hate crime, Norway neither returned hatred by showing greater hatred or imposing the death penalty, nor did it take away the life of the criminal. On the contrary, by showing a humanitarian treatment based on love, it chose to aim at his restoration to society.

On November 13, 2015, a series of simultaneous terror attacks broke out in Paris, which took the lives of over 130 people. A journalist whose wife lost her life there sent a courageous message to the terrorists: “I will not give you the satisfaction of hating you.” This message, coming in the midst of outcries for revenge “to fight terrorism” gave some ray of hope to many people.

Recently also, on the occasion of the assassination of Fr. Hamel, many called for strengthening security at churches to fight against terrorism, but the Catholic Church in France chose a different approach. Many French parishes invited Muslims to join them at Mass on Sunday, July 31. Both Catholics and Muslims had the emotional opportunity to pray together and experience deep companionship. No religious walls were raised. Bridges were built.

According to the words of his younger sister, Fr. Hamel had been brought up from birth to pray for peaceful coexistence between Christians and Muslims, and he worked actively toward that end. Despite pathetic incidents brought about in the name of “religion,” revenge and hatred toward Islam are not the way to react. Joining hands, rather, to build a peaceful world together is in reality the will of Fr. Hamel and the way for us to find hope.

The 26-year-old who massacred 19 persons in Sagamihara (Japan) had been induced to accept the “eugenics theory” that in this world there are “useless lives.” 70 years have passed since Nazi times, but such a way of thinking is still deeply rooted in the heart of humanity. Facing Jesus nailed to the cross, and aware at the same time of the final days of St. Maximilian Kolbe in Auschwitz, we are challenged as to what kind of an answer to give.

Blessed are the merciful
More than the beauties of nature and the towns, or the delicious Polish food, what really moved me more in Poland was the warm friendship of the people. We were always given a warm welcome in the places we visited—by host families, the event’s volunteer staff, students at the Japanese school, and not only by priests and religious but by ordinary passersby. The fact that Poland is maybe the number 1 or 2 Japanophile country in the world and over 90% of the population is Catholic (more than in Italy) may account for this. I learned from my host family this Polish saying: “A guest in the house means God in the house.” I felt that the inner spirituality giving rise to this attitude is seen in the hospitality Abraham showed his guests (in Genesis, chapter 18) or the care shown to the least ones (in Matthew, chapter 25), with “compassion” and without expecting reward.

The theme of WYD Kraków was the verse from the beatitudes: “Blessed are the merciful, for they will receive mercy” (Matthew 5:7). Whenever I met with Polish people, their attitude of deep compassion assured me that such sacred words did not stop at theory but provided me with the great blessing of experiencing them personally. No more suitable words could be found for this WYD.

We are now celebrating the “Special Jubilee of Mercy,” which has as its motto: “Be merciful as the Father” (Luke 6:36). I could feel the depth of the merciful Father during the WYD held during this Holy Year. Especially on the last day (Sunday, July 31), the so-called climax of WYD, it was so impressive to be among several million youth who had gathered from Saturday afternoon in the “Campus Misericordia” to pray together and sleep outdoors while waiting for the closing Mass celebrated by Pope Francis. In his sermon he said:

“People will try to stop you. They will try to make you think that God is distant, good to the good and bad to the bad, rigid and insensitive. But our heavenly Father ‘makes his sun rise on the bad and on the good’ (Matthew 5:45). He demands of us real courage—the courage to be more powerful than evil by loving everyone, even our enemies. People may laugh at you because you believe in the gentle and unassuming power of mercy. But do not be afraid.” 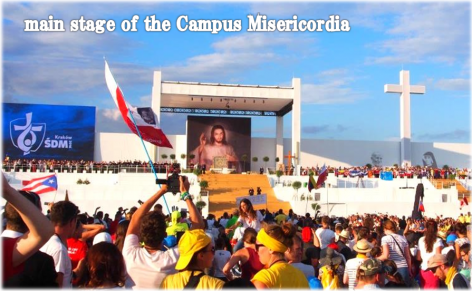 Pope St. John Paul II decided to hold the first WYD during the previous special Holy Year of Redemption (1983-84). I could not help feeling that there was some mysterious link with that first WYD.

We tend to build walls around ourselves because of anxiety and fear, hatred, indifference, powerlessness and interior shame. We tend to withdraw into our own shells. We have a clear message from Pope Francis inciting us continually to transmit the joy of the Gospel by going out of ourselves, even if it may mean getting hurt. During our WYD we frequently recited a prayer of St. Faustina: “Jesus, I trust in you.” This short prayer gave us plenty of courage. 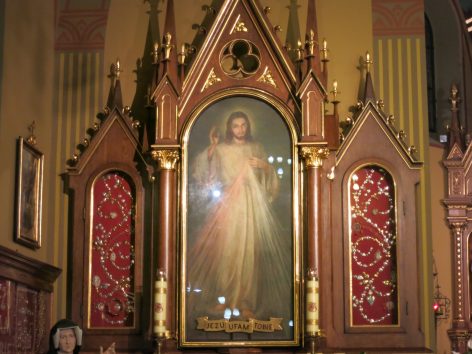