JCAP Sustainability Conference
From August 8 to 11, five Japan Province Jesuits and a collaborator attended a workshop organized by the Asia-Pacific Conference at Sanata Dharma University in Yogyakarta with the theme “A Call to Life Sustainability.” It was a call to implement Pope Francis’ proposal in Laudato Si’. Thanks to the various opinions offered, we had a vivid experience of the content of integral ecology, the central appeal of Laudato Si’.

The workshop started with field visits. Divided into groups, we visited nearby villages where we got a taste of the life of Indonesian farmers. Afterwards, a keynote address on “Sustainability and Ignatian Spirituality” was delivered by Fr. Patxi, coordinator in Rome of the Social Justice and Ecology Secretariat. Following that presentation, several experts in social and economic matters, as well as Buddhists, Muslims, and Hindus, offered their views on spirituality and ecology and each group shared their opinions.

This workshop had a different significance from such previous Jesuit gatherings. Jesuit lay co-workers, several experts, local university students, representatives of young Catholic organizations, and many other young people participated. It was an exciting meeting. It was a deeply impressive experience to pictorialize the sentiments we felt or, following the Hindu style of prayer, to have each participant praying under candlelight. 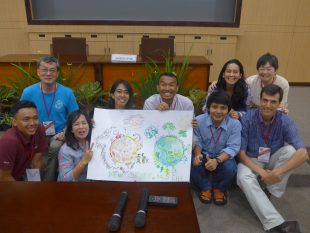 On the last day, each country and region made a list of three areas: “what to STOP, what to START, what to SUSTAIN” in accord with the workshop’s theme “A Call to Life Sustainability” and based on their areas of concern. With regard to ecological issues, a theoretical approach does not always lead to action, and I felt that communities and institutions in the Japan Province, too, should hold similar discussions and make lists of possible actions.

On the whole, the following key words that touched me deeply regarding “Life Sustainability” were: “societies tolerant enough to include and not to exclude people,” “peace through dialogue,” “societies that restore damages received.” In order to achieve these, conversion and integration are called for. In other words, in order to establish a world where society is sustainable, there is need for human communities that value sustainable environments in which nature is protected, equal rights are maintained, and all people can live safely.

It is certainly true that, based on humanly scientific methods which surpass self-justified technological knowledge, conversion and deep spirituality are needed to make fraternal and beautiful use of the goods people own. “Compassion” is demanded, as Pope Francis stresses. 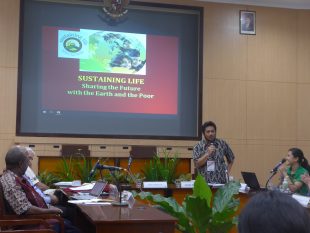 The issue is not to face war, privileges, and conquest by trial, selection and control. I was able to verify that future aims for the world are communities for peace, human rights, friendship, and togetherness, which accept a variety of creativities and are open to intergenerational dialogue—simple local life communities that are able to revive traditional local wisdom and values. It was rewarding to experience being together in the Catholic Church and the Society of Jesus with companions who have overcome all forms of isolation, cultural life backgrounds, languages, and nationalities. 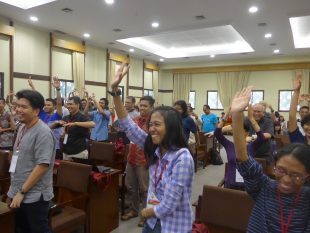 The two-day workshop started with input concerning themes of social apostolate matters common to both countries. These were (1) the forceful deployment of workers from the Korean Peninsula for the Chosei coal mine in Yamaguchi and the history of forced labor, (2) work with migrant workers in Kitakyushu, and (3) military bases in Okinawa. Four groups were organized before the workshop. They were (1) ecology and enucleated movements, (2) peace movements, (3) migrant workers, and (4) labor and social justice. Each group sedulously discussed the input offered by the speakers.

On the third day a field trip was made to the former Kanpu ferry pier, the warehouses where Korean workers were locked up after arrival, and the Korean town. It was an opportunity to learn about the historical relationship between the Korean Peninsula and Shimonoseki. During our visit to the Yamaguchi Korean First Intermediate School we heard a vivid first-hand account from a 95-year-old first-generation Korean about his past experiences in Japan. We also greatly enjoyed Korean songs and koto music played by a small group of Korean girl students. Then in the afternoon we visited Tsuwano and Yamaguchi, where we learned about the history of Jesuit evangelization. 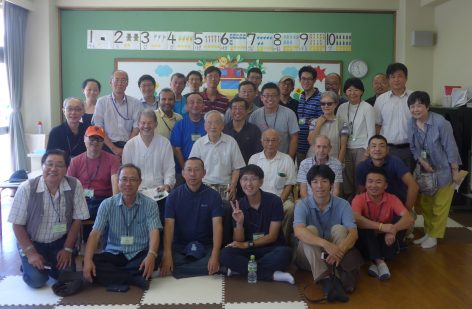 On the last day we discussed action plans and shared social apostolate realities of our two countries, as well as our vison and ideas for the future. Among these plans, one concerns the proposal to organize peace education programs targeting young Jesuits at the Saint Francis Peace Center on Jeju Island in Korea and in Shimonoseki and Okinawa in Japan. This would act on the approved proposal to increase active exchange of Jesuits during regency or after tertianship with renewal programs and experiences in the social apostolate institutions of Japan and Korea, including language training in both countries. I believe that, upon discussion with the Provincials of both countries, such action can be implemented.