New encounters
I finished the work I had been doing for three years in Northeastern Japan and sixteen months ago got my present job in Shimonoseki. I have been asked to write on “the future of the Labor Education Center now that the renovation work has been completed.” At this moment I find it difficult to sum up the many opinions regarding the Center. Instead, I prefer to tell about the encounters I have had during the last months and how I feel about living here.

I was born and raised in the Kanto region, so it still seems strange to find myself living every day at a location looking across to Kyushu. Of course, when one moves to a new place, it is not only the scenery that changes. The history and the language of the new place are also different. I feel I have been given the opportunity of encountering a variety of issues concerning the past history of Shimonoseki and of the people living here now. 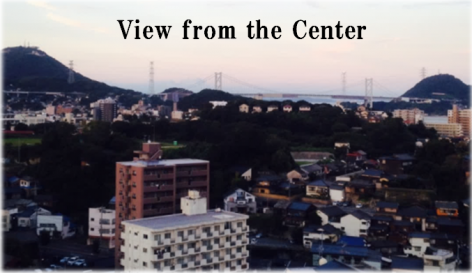 Just by being here, it is impossible not to see issues regarding Koreans. In the past many soldiers set out from Ujina harbor in Hiroshima to invade Asian lands, and in Shimonoseki, regardless of their wishes, many Koreans from the north and the south were brought to Japan in boats across the Kanpu Strait and were sent by train to work all around Japan. Near Shimonoseki Station stands the Busan Gate, and many Koreans still live in Shimonoseki.

In May of last year, as if waiting for my arrival, new classes in the Korean language began, which I joined. The teacher is a young Korean mother living in Shimonoseki, who learned Korean after going through great personal changes and has become a very gifted teacher of the language. Three new students, who had been waiting for many years for this opportunity, are now working hard to learn Korean.

I am grateful for the opportunity to enjoy this fortunate experience. Learning a language puts you in touch with the way of thinking of the target country and its culture. Thanks to these classes and through casual conversations with the teacher, it is possible to come into touch with the hardships of Koreans living in Japan and with their undefeated strength as well as with the cheerfulness hidden behind their strength. Our teacher has also started a class in Korean cooking, where from time to time I enjoy delicious Korean food and participate in cultural exchanges.

Looking back over the last year, I had the opportunity to meet many Korean people in various ways. In September last year I attended the Peace Conference held in Jeju Island and became aware of problems concerning construction of a naval base there and the activities of groups opposing this new base. If on the one hand a military base has been built to destroy peace, on the other hand a Peace Center has been built as a base for the promotion of peace. The Catholic Church is deeply involved. Seeing open air Mass being offered very morning in front of the gate of the military base, I felt the staunch enthusiasm of the Korean Church, so different from the Church in Japan. After the Peace Conference, Jesuits and coworkers in the social apostolate of Korea and Japan held an exchange meeting.

I suppose that many readers know that Shimonoseki has hosted three exchange meetings with Korean activists calling for abolition of nuclear energy. Korean participants were also present for the fourth time at a meeting held by the Catholic Justice and Peace Commission last year in Tokyo. Once the meeting closed, we went together to visit Fukushima. This year an antinuclear gathering is scheduled in Korea, and an exchange meeting of Jesuits and coworkers in the social field from Japan and Korea will be held in Shimonoseki. 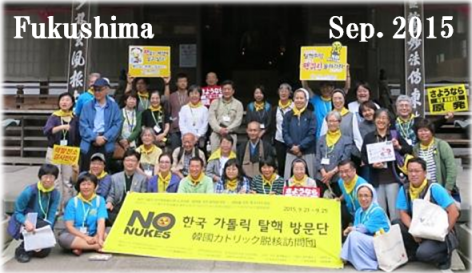 Last year a national Forum of the migrants’ network was held in a Korean school in Kita-kyushu. The host representative was Mr. Iwamoto Mitsuhiro of Mizumaki Church, who has been involved for many years in Kita-kyushu in problems of workers with foreign nationality. Fr. Hayashi, Director of the Shimonoseki Center, was also joint representative in the Forum. The “Kanmon Multicultural Network” was organized last June as a follow-up to this Forum. Actually, since the number of foreign workers married to Japanese is increasing, the issue of workers is not the only issue being addressed. The multicultural network aims at learning from each other on at both sides of the Kanmon Strait and to strengthen their ties. It also hopes to find ways of mutual assistance in case there should be some need for help. By way of answering requests from members of the network, we sometimes visit the Omura (Nagasaki) Immigration Center and in this way come into touch with the actual situation of foreigners living among us in Japan which is not normally visible to us.

There is a group in Shimonoseki called the “Nikkori Group,” which aims at linking Japan and Korea. Together with them in the first week of September every year, we organize a gathering to commemorate the massacre of Koreans in Japan following on the Great Kanto earthquake. On November 23 (Busan Day) there is a Peace March to appeal for mutual peace. On September 3 this year we intend to ask Pastor Kim Jong-su from Korea to deliver a keynote speech on “The Kanto Massacre of Koreans: Japan-Korea Mutual Responsibility” to remind us of the Kanto holocaust.

Busan is located 200 km west of Shimonoseki, and Hiroshima is 200 km east of Shimonoseki. The distances are not so great. Korea is a nearby country I would like to visit, and because of their historical past I wish Japan and Korea could become closer. So I open myself little by little to new tasks of dedication here in Shimonoseki, where links with South Korea are slowly being built. A major work for me in this Center will be to establish links, no matter where I am.

Future Issues for the Center
“Church” could mean a building or could at other times refer to a community of brothers and sisters formed by its members. This could also be said of the Labor Education Center. In other words, the Center provides use of the building for activities but it also aims at getting out into society to contact people and invite them to encounter God’s Kingdom. Both meanings are important. It would be wonderful to have a good balance between going out to encounter those who already live the Gospel values in various social environments and using the Center facilities to answer the needs found in such encounters.

Up till now, Fr. Hayashi and other staff members have undertaken many activities in encounters and relationships cultivated over many years. Now I feel the call: “Don’t be afraid. Throw the net out into a new ocean!” Could the “new ocean” mean those we have never met until now? Or will it be those of the next generation? Who will take over activities here in Shimonoseki and how? Will it be members of groups opposing nuclear plants and tragic nuclear weapons? Or will it be dedicated volunteers among elder citizens who continue to appeal to future generations against the cruelty of wars? A matter of great urgency, I think, will be to encourage young people to dedicate themselves to social movements and to offer a place for them to learn together.

The Center is administered now by a religious moral organization, and thus its pivotal center is the Church, but, more than being as it were a tentacle of the Church, its feet are inserted in the midst of people of good will. As need arises, the Center could become a link between the Church and society. I hope that we can broaden our activities by planting our feet among the people, encouraged by the recommendation of Pope Francis: “Don’t be afraid. Go out.” Through acts of love let’s get out into society in order to change the Church from a self-guarding organization into a Church engaged in society. I hope our Center will be able to lead the way through at least one turning point along the journey.