A few days after the closing ceremony of the G7 Summit for heads of the world’s wealthiest states that took place in Ise-Shima (Japan), the mass media published a shocking report on modern-day slavery, following global findings corroborated by objective surveys conducted by the Gallup poll. Detailed data and analysis of regional and country reports can be found on the website “Global Slavery.” A shocking final result is that in this very year 2016 about 45.8 million people, mostly women and children, are victims of some form of modern slavery in 167 countries. It is estimated that the Asia-Pacific region is heavily affected. (The Japan Times, May 31, 2016, disclosed these facts under the headline “Study faults Japan for inaction on modern-day slavery.”)

Many in Japan will be surprised to realize that Japan ranks as number 41 among the worst affected countries in the world. In one section of the Global Slavery survey, entitled “Estimated proportion of population in modern slavery by country,” people believed to be modern slaves in Japan number 290,000, or about 0.22% of the total population of 127 million.

Our experience at this migrant desk leads us to believe that the majority of such modern slaves are foreign workers living and working in Japan. Of course, it will be an exaggeration to believe that this a general trend, but at the same time it will be naïve to take it as a minor reality or to suspect that it is mere anti-Japanese propaganda.

The G7 heads that recently gathered here are considered to be representatives of the wealthiest and most influential countries on earth. They dealt with reconstructing the world economic system and touched on the present migrant crisis in Europe. Modern-day slavery and the critical condition of foreign migrant workers were not on their agenda.

The Jesuit Migrant Workers Network
The JCAP covers the East Asian region, where we might consider two different blocks of countries coexisting together. On the one hand, several of these countries export hundreds of thousands of workers in the hope of solving or alleviating their poverty, while other countries in the region welcome those workers in order to make themselves more affluent and developed. Using a classic international expression, we have here a clear North-South division. Japan, South Korea, Taiwan, and Hong Kong (?) are at the center of the rich northern hemisphere, where other East Asian countries go looking for job opportunities so as to escape from poverty and better their living conditions.

Jesuits, albeit few, have usually had small institutions working with migrant workers on both sides. South Korea has just reorganized its work, building a new Yiutsari Center staffed with 3 Jesuits. Taiwan, through its Rerum Novarum Center, has an impressive record of involvement with foreign workers. The Philippines is solidly organized under UGAT and various networks with several Jesuit institutions of high learning. Indonesia is reorganizing its long involvement with migrant workers. Japan, with the Jesuit Social Center as its base, accompanies foreign workers and provides needed legal services and basic education for children and their parents. Vietnam has begun to accompany internal migrant workers and train them when they leave the countryside to work in the cities. JRS Thailand has a long tradition of caring for hundreds of thousands of migrant workers from Myanmar.

From the point of view of the situation of migrant workers, those rather individual efforts that took place in the past became more coordinated into a network that has been actively working since 2011, when the first Jesuit migration workshop was held in Seoul (May 15-17, 2011). Since then, workshops have been held annually, in Manila (2012), Jakarta (2013), and Taipei (2015). 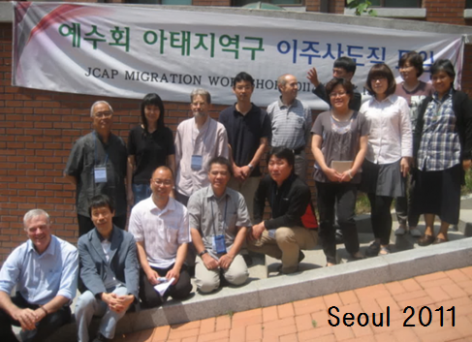 Recently, on April 19, 2016, 13 members representing 7 countries of the East Asian Jesuit migrant network met in Vietnam under the leadership of the network coordinator, Fr. Benny Juliawan SJ, to discuss common programs and the 3-year research projects focusing on the present situation of foreign workers, the main issues concerning their repatriation or inclusion in the societies where they have been living and working, and the dark world of brokers. In fact, the first common research project will go into print in English during this month of June. 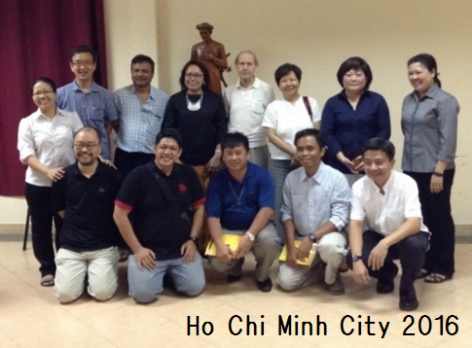 There is, certainly, much literature related to these subjects, but the network aims to offer platforms for migrant workers aiming to find better responses to their real needs. One of the strengths of the network is to have persons really involved in the sending countries, as well as in those countries receiving foreign migrant workers. For instance, Yiutsari in Korea works with Cambodian girls sent to work in Korea. Taiwan works with Indonesian girls going to Taiwan as domestic helpers. Japan with Filipino/as, Vietnamese, or even Africans working in Japan in small factories. Jesuits try to accompany these foreign workers and coordinate activities at both ends.

Language is a strong barrier for foreign workers coming to Japan, Taiwan, or Korea. Due to their lack of knowledge of the language of the country, most of them are blocked out from the new societies they have entered by not having supporters and true reliable information. This situation usually makes their living conditions and choice of jobs unbearable. Our pastoral activities and churches reaching out to them may offer support and friendship only in limited ways and to small minorities. The reason why countries accept them is that they need cheap young labor to improve their economies. But workers coming from Vietnam or Indonesia, or even from as far away as Nigeria, want their families to have better lives and education, free opportunities to come out of poverty. I met a Filipino worker in his fifties who was afraid of being sent back to his country because his visa had expired. He felt insecure, no longer being able to send back home 7,000 yen a week (about US$70), an amount of money considered to be a fortune for his family. But what interests Japan, Taiwan, or Korea is simply cheap young labor. Foreign workers can remain temporarily, but they will have to go back and new ones will replace them. “Give and take” is the name of the game.

Recognition of the human dignity of migrant workers and their families and respect for their human rights are dynamic forces that strengthen our network and offer testimony to our Christian values in non-Christian environments. The field and possibilities for work are unlimited.