This year also the “Association for Solidarity with our Friends, the People of Cambodia” (CAMBOREN) organized a study tour in Cambodia at the end of January. Camboren acts as a partner of Jesuit Service Cambodia (JSC) in Sisophon, a town located about 50 km from the Thai border. For the past few years it has also begun to cooperate with “The Light of Mercy Home,” an institution that takes care of children with disabilities in Phnom Penh.

Our group visited the JSC Sisophon office for the first time in 2003. We met there with Ms. Sok Eng, the director and with Jesuit Fr. Greg. Everybody was greatly impressed by Ms. Sok Eng’s strong and charming detailed explanation of the projects undertaken and their reports. Then, all members present made an immediate decision. “Let’s organize ourselves into a group to become partners of JSC Sisophon!” Since then, for the last 13 years, Camboren pays yearly visits to Sisophon.

A year after our first visit we helped build 13 houses (4m x 5m) for poor families and persons with disabilities. When we visited the villages, we were told that, aside from the Indonesian Fr. Greg, we were the first foreigners to enter there. The JSC Sisophon staff is in daily contact with poor and families with disabilities and through their surveys they are well aware of people’s most important needs. During our study tours our members can also listen to the people we meet. Every time we meet in Cambodia, we discuss frankly with the local JSC staff projects focused on “human development” in order to cooperate in a spirit of solidarity.

During the study tour this year we paid a visit to the family of Vun Samet, who was the first receiver of a cow in 2006 when we started a “cow bank.” The project works the following way. Vun Samet rented a female (mother) cow from JSC. The first and the third cows born were given back to JSC in repayment for the mother cow they had received. The second, fourth, and others born later, as well as the mother cow, remained in the possession of the family. The project is self-supporting.

In 1984, Vun Samet was a Khmer Rouge soldier and, having stepped on a land mine, had to have his left leg amputated at the knee. Small fragments of the land mine still remain in his head and legs. He told us that when the weather is cold he feels great pain.

His home is in the village O Ampil, near the Thai border. When he started to take care of the cows he was surrounded by forest, but little by little he cleared the place. Though he is disabled, he can take care of the cows easily since they are near his house, and he earns money doing such work. By zealously raising the cows, he was able to return 2 cows born from the borrowed mother cow. One of the third generation cows is already pregnant. He is also taking care of other people’s cows and, thanks to his income his family enjoys a better life. When his son got seriously ill, however, he had to sell 4 of his 6 cows to pay for the surgical operation and the medical treatment. A deep frown etched in Vun’s smiling face overflows with full self-confidence while he talks.

In the beginning, Camboren assisted 5 families with one cow to each. When young cows were born they were given to different families and so the Cow Bank project expanded. Today, thanks to the success of the project, there is no need for more assistance from us.

And, in 2011 we started small loans for farming for families of Tuol Prasat, a village near the Thai border. A year previously, we had met with the head of the village, his collaborators, and the villagers and parents of school children, together with the JSC staff to listen to their needs. The villagers said that their priority was to build a road needed for their work in the fields. They also mentioned that a reservoir was necessary for the schoolchildren and for the inhabitants of the village. After discussing the matter, Camboren, unable to answer all needs, promised to assist in building a water reservoir and school classrooms. But the first thing needed was to clear the site of landmines in order to build the school, which was done through the help of the “Cambodian Mine Action Centre” (CMAC). Soil from the reservoir and other materials were used to build a 3-wooden-classroom primary school. Parents also actively attended all discussions and promised to send their children to the primary school and unanimously decided they will not ask to let their children be absent from school to help at harvest time.
Now that the construction is finished, the pupils keep the school clean and practice ecological education by planting trees around the playground in groups. Of course, the villagers help in the supervision and make use of the reservoir.

A year later the loans for rural development started to function. 30 families divided into groups of 5 each received US$100 to buy seeds and fertilizer. They were able to harvest rice and sugar cane. Up to now, part of their income has been saved in the community fund and, in accordance with the wishes of the villagers, 2.5 km of the bumpy road could be repaired, 300 trees along the road were planted, and a family and a teacher whose houses were destroyed by fire received financial help to build them again. The loans are preferentially offered to poor or people with disabilities. Nevertheless, the assistance doesn’t stop merely at helping families become self-sufficient. Part of the profit obtained goes to community management so that the whole village develops. Actually, 47 families are getting loans. This is a clearly successful case of community self-sufficiency. 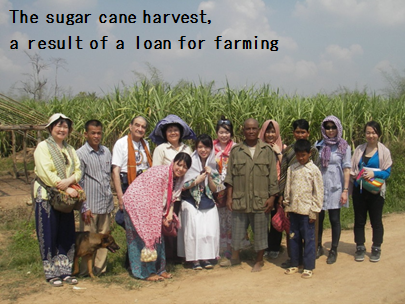 Nevertheless, it is true that not everything goes so smoothly. Last year, we helped to build a reservoir and a loan for farming was given to 30 families in a village near the Thai border, hoping that it would develop community in the village. But when we went to visit the project this year, we found that tall grass had grown thick around the reservoir and the people remaining in the village were few. The farmers told us that rain had been very scarce and the rice and crops withered so that there was no harvest and most villagers crossed the border looking for jobs in Thailand.

The only crop that grew was cassava, but the daily wage to collect the harvest was just US$2.50 there. They left the village to work in Thailand, where the daily wage was US$6~8. Remembering the conversations held last year at the inauguration of the reservoir, the head of the village told us that, once the villagers could be economically independent by working in their fields, there should not be more need for them to go to work in Thailand. Their children could also study by attending the school in the village. Besides that, he expressed his desire that those already working in Thailand could return home and enjoy a peaceful life there. In spite of various failures, JSC continues its assistance there without giving up and, since loans for farming are a 5-year project, we also took the risk this year. We feel sad because things do not go according to our desires, but in spite of such difficult times JSC struggles with great patience and tries to overcome all difficulties in unison with the farmers. We also continue helping. 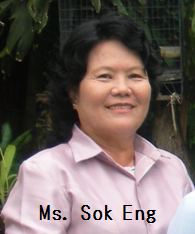 The JSC staff acts as intermediary between Cambodians and Camboren members. Ms. Sok Eng has been the most important link in our contacts since 2003, when we met with her at Sisophon. Lately, Camboren members were shocked at hearing that she was suddenly going to retire. She had to suffer greatly from 1975 on during the rule of the Khmer Rouge, when they killed her most beloved family members. That terrible experience totally changed her life. She literally survived miraculously. She recognized that from that time on this experience clearly transformed her attitude in life. Upon entering JSC, she selected a life dedicated to the poor, the disabled and those living difficult lives. We Camboren members who have often met her confirm that she is a living testimony with her dedication to poor and suffering people. Education is her main field. In the classroom she teaches a living vocabulary to children and, at the same time, runs concrete teacher-training programs. She encourages all with conviction. Again, using radio programs and mobile libraries, she has actively promoted education and advocacy activities for villagers. We deeply respect Ms. Sok Eng and are full of gratitude to her. She is very charming, too. Every time we ask her to arrange our hotel schedules she checks all our rooms in detail with the hotel staff and sniffs each pillow cover for strange smells, which causes us to burst into laughter. In fact by doing so she educates the hotel staff. She is “an educator” full of loving care whenever she approaches the villagers and the persons serving in the village restaurant. Judging from her responsibilities at JSC and her life style, everybody evaluates her highly. Educator by nature, her smiling behavior reacting quickly and with alacrity produces warmth for everybody. I felt that her passion towards the people, Cambodians like herself, implies a desire to raise the level of their self-confidence.

I think that our assistance to Cambodia, which started by filling basic needs, like food, clothing and shelter, has shifted to the soft area of education. In our yearly visits for over more than 10 years, we find very rapid changes in the field of development and people’s affluence. Even Japan, which enjoys a developed economy and universal general education, people can experience poverty gaps. Unemployment does not increase but, in reality, 40% of the workers are irregular so that even those working live unstable lives. The poverty rate for children is widening to 1 for every 6, and poverty of women and persons advanced in years is becoming serious.

If one follows a “productivity” measure to evaluate persons, as life insurance companies do, children, the elderly, persons with disabilities, and women get low marks. Though educational and public welfare institutions are well equipped, some get richer, while others become poorer. If we add to this the lonely, the discarded, those discriminated against that are not easily seen, the situation gets gloomy. In other words, having such little negative example as a reference, and considering the economic development growth in Cambodia, I believe that we must continue our double assistance programs. On one hand, financial help for education and economic self-sufficiency will be necessary but without lowering, at the same time, a priority to answer the needs of those unable to stand up. Using the image of a vehicle, the assistance must run on both wheels.