Understanding Spirituality
Carla Streeter, Dominican Sister and theologian, offers the following definition of spirituality: “Spirituality is real presence.”1 “I am myself,” she says, “and that in itself manifests the Holy.” This understanding of spirituality, as something that links the spiritual world with the real world, is very rich in implications.

How we are committed to social problems is a task facing us Christians. Moreover, if as people of faith we try to approach society from God’s point of view, we must by all means have a spiritual dimension. In such cases, understanding spirituality as “real presence” is deeply meaningful. If people really want a living spirituality, it cannot be had unless they have a real presence to themselves, the world, and society. At the same time, it is only within the world that they can encounter God, who is already really present to the world within himself.

To have a living spirituality does not mean either to withdraw from this world so as simply to get lost in contemplation of God, or to escape from the real world. If one wants to attempt solutions to social problems from the vantage point of faith and the gospel of the “Kingdom of God” taught by Jesus, such solutions will be impossible without a spiritual dimension. A genuine spirituality is a way of finding God in the midst of society. Even if one has a correct theological and biblical understanding of the “Kingdom of God,” one cannot attempt real solutions unless one wakes up to the “Kingdom of God” as expressed by Christ in “The Kingdom of God is in your midst” (Luke 17:21).

Waking up to Agape and Mercy
So what does waking up so as to live the “Kingdom of God” mean? It is the unconditional love of God which reaches out indiscriminately to every single person—that is, it reverberates to mercy in the depth of the heart, overcomes egoism, and lives out agape, unselfish love. Here, through agape, one affirms oneself as really present and goes on from there to live out agape toward others.

To wake up to such agape is to wake up to God’s spirit that is working inside one’s heart. In his bull proclaiming the Jubilee of Mercy, Pope Francis expresses God’s agape as mercy and says that the mercy of God is not an abstract idea but a “visceral” love (6). In order to solve social problems, one cannot disregard the dimension of justice, but simply to stop there can result in a legalistic outlook. Concerning this the Pope says, “Justice is conceived essentially as the faithful abandonment of oneself to God’s will. … Salvation comes not through observance of the law, but through faith in Jesus Christ, who in his death and resurrection brings salvation together with a mercy that justifies” (20). Thus, the Pope finds the essence of mercy in Jesus Christ, and stresses the importance of situating justice within this mercy.

Once we recognize that Christ is present in each individual—the “least ones” who are weighed down with the heavy burdens of this world’s sufferings—and realize that the mercy of God has already been extended to them, the solution of real problems and the implementation of justice become urgent.

Nurturing Agape through Vipassana Meditation
To take mercy in its root meaning is to see agape in its root meaning. In other words, it is to see society from the heart of God who is agape itself (“God is love.” [1 John 4:6]). This agape is the “unconditional affirmation of presence.” When each person fosters agape deep in the heart—that is spirituality. To grow in real presence is continually to transcend one’s own prejudices and one’s ways of seeing and thinking about things and to face reality with an “unconditional affirmation of presence.”

I find the Vipassana meditation of Theravada Buddhism quite effective in developing such a spirituality. Vipassana meditation aims at “noticing myself as I am here and now,” and more concretely, “noticing myself as I am now, without positing any judgment on my way of sensing, feeling, or thinking at this moment.” This is at the basis of seated meditation and it can be used in daily activities and in the midst of one’s work.

For instance, if while walking your foot strikes the corner of a desk and you cry “ouch,” you identify yourself with the pain. On such occasions, through this type of meditation, you change your awareness and notice “there is pain in my foot” and grasp the “pain” only as a sense phenomenon and pass no judgment on the “pain” as good or bad. In a similar way, when anger surges up at what someone says, you notice “I’m feeling anger now,” dissociate yourself from the anger, and do not judge it as “anger.” Or, when you suddenly think, “Whatever I do, it will amount to nothing,” you change your heart so as not to be overtaken by that thought and simply notice that “now I was thinking ‘Whatever I do, it will amount to nothing.’”

In this way you become able to live freely at every moment, without being overtaken by sensations, feelings, and thoughts. You notice yourself as you are without judging your sensations, feelings, and thoughts, and in recognizing their existence your awareness is converted to agape and you foster the unconditional affirmation of presence which is agape. In this way, by having a liberated heart, your stance is such that you see things quite objectively and can discern from the standpoint of agape. By noticing things in this way, you awaken from a physiological level of feelings to an awareness of a concrete unconditional affirmation of presence in the midst of your life and work, and this enables you to live out spirituality’s ideal of being contemplative in the midst of activity.

This inner attitude of heart provides the strength to overcome the self-centered ego. At the root of social problems is egoism, based on personal advantages and disadvantages and adhering to the desire to possess wealth, status, and control. Nor is it limited to the personal level but causes great problems when at the group level, the ethnic level, and the national level it becomes group egoism, ethnic egoism, and national egoism.

Of course, the social problems that arise today are intertwined with complex elements and conditions, and unless one approaches them from a sociological, economic and political, historical, cultural and psychological point of view based on human dignity, suitable solutions cannot be found. But even if all these aspects are brought into play, there can be no true solutions for social problems unless egoistic problems are finally solved in their spiritual dimension. This means that personal spiritual conversion is needed above all.

This conversion is not so simple, but I would like to offer here for your consideration the outstanding example of Myanmar, where one person’s spiritual development brought about a successful democratic, non-violent change in the national system.

The Contemplation Supporting Myanmar’s Democratic Movement
Vippasana meditation is a method of meditation that originated in the Southern Buddhist tradition, one center of which is Myanmar. Vipassana meditation has been practiced in Myanmar ever since the introduction of Buddhism there.

Last autumn, the National League for Democracy led by Aung San Suu Kyi obtained a great majority of votes in the general elections, and this spring Myanmar’s political system, which had for many years been under the iron control of military rule, has been taken over by a democratic government. 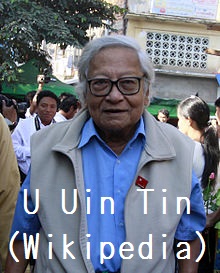 Aung San Suu Kyi worked for Myanmar for many years as champion of a democratic movement insisting on non-violent means. In fact, many of her closest collaborators practice Vippasana meditation. One of her aides, U Win Tin, was repeatedly imprisoned and tortured. In prison he was not allowed to sleep, had his head covered with a burlap sack and, in agony from continual beatings, was urged to withdraw from the democratic movement, but he refused crying out, “It is for your sake. Freedom is for your own good.” He resolutely maintained his stand for the democratic movement.2

Through meditation he learned how to maintain a heart liberated from the danger of control by hatred and anger. He actually felt mercy toward his guards and says that he learned that “freedom is much deeper that the fear of losing it.” It is by the very freeing of our hearts from anger and hatred toward others that we can produce true peace. Myanmar’s non-violent democratic movement spanned many years and can be called an outstanding and realistic example of a persevering non-violent struggle.

In order to achieve a radical solution to social problems, a spirituality that breaks through egoism is needed. One thing that makes that possible is Vipassana meditation, which nurtures agape beginning from basic awareness. I hope to direct my attention even more from now on to Vipassana meditation from a Christian standpoint.