“An Economy that Kills” 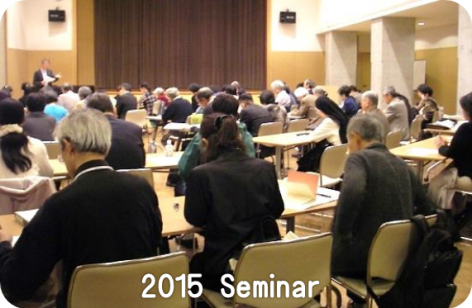 On December 7, 1965, the Second Vatican Council’s last official document “The Church in the Modern World” (Gaudium et Spes) was published, and the following day saw the closing ceremony of the three-year-long Council. To commemorate the 50th anniversary of these two events, we decided to dedicate our “Social Problems and the Catholic Church” Seminar series of 2015 to the study of and reflection on that document and the present situation with the theme “The Second Vatican Council and Today.”

“The Church in the Modern World” was the first conciliar document that the Catholic Church ever in its long history addressed not only to the Catholic faithful and other Christians but also to the whole world.

That negative attitude towards the world underwent a radical change with this document. It was a change from an authoritative attitude of the Church trying to impose its own way of thinking on almost everything to a humble attitude that, with the light of the Gospel, only wants to serve humanity, helping it find answers to the problems it faces, its anxieties and worries (“The Church in the Modern World”, Preface and Introduction).

For that purpose, the document begins with a consideration of the world situation at the time, the social, psychological, moral and religious changes, the imbalances in the world, and man’s deeper questions, desires and hopes (Introduction).

In definite contrast to statements of Popes of the 18th and 19th centuries, the Council affirmed the dignity of humanity and the excellence of our intelligence, conscience, and freedom. Then, referring to mankind as a community, it mentioned the essential equality of all people, the common good, and social justice. Then, in order to implement all this, it proposed the need for solidarity, for each and every one to fulfill their own responsibility and take an active part in public affairs (Part 1).

Asserting the Church’s desire to serve mankind as a whole and every person, the Council pointed to the problems considered especially urgent at that time and offered what it considered to be the best solutions.

These are the main problem areas it pointed out: marriage and the family, the proper development of culture and the responsibility of Christians in this regard, socio-economic life together with various problems related to work, the life of the political community and its relation with the Church, and finally, the promotion of peace, ways to avoid war, and the building up of the international community (Part 2).

Thinking about Today
Having already experienced the Church as a lay person and as a Jesuit, I found the Second Vatican Council an epoch-making event bringing about a reform thanks to which the Church became more faithful to Christ’s will. But in some places or for some groups within the Church it was not so. There were those among the faithful, among members of religious congregations, and even among bishops, who could not accept that kind of reform and were reluctant to change. The rapid social and cultural changes in the world at that time also made some people anxious in such a way that they could not (or did not want to) change.

As a result, although the Church 50 years ago declared that it did not want confrontation with the world but on the contrary wanted to serve mankind, it could only fulfill that promise to a limited extent. At the same time, what the Church then recommended concerning political and economic problems, the role of the family and of culture, etc. was almost ignored. What today is considered to be the crisis of marriage and the family, increasing wealth inequalities, wars, conflicts and so-called terrorism, the increase of refugees, emigrants and displaced persons, etc. all bear clear witness to the fact that the Council’s recommendations were not accepted or implemented.

Our present Pope Francis has followed the inspiration of “The Church in the Modern World” and developed it in several ways. In order that the whole Church might face the problems related to marriage and the family, he convoked an extraordinary meeting (synod) of the world bishops’ delegates October 5-15, 2014, and one year later, following up on the results of that meeting, he convened an ordinary synod to consider “The Vocation and Mission of the Family in the Church and in the Contemporary World,” which was held October 4-25 last year. At the end of that synod more than two-thirds of the bishops approved all the proposals and the final document was published. The Pope, taking into account all the proceedings of both synods, has just published the apostolic exhortation “The Joy of Love” (Amoris Laetitia) in April 8, 2016.

Through many of his messages and especially in his apostolic exhortation “The Joy of the Gospel” (Evangelii Gaudium), Pope Francis considers again the problems of the economy, politics, war and peace, etc., which were dealt with by “The Church in the Modern World” and whose recommendations were not carried out. Dealing with them in a deep and comprehensive way, he analyzes our situation Today in the following way.

The lack of equal opportunities is fertile terrain for aggression, conflict, and violence. Until exclusions and inequalities in society and between peoples are reversed it will be impossible to root out violence (“The Joy of the Gospel” no.59). Exclusion and inequality sooner or later engender a violence which weapons and repression cannot and never will be able to resolve (no.60).

In fact, while the earnings of a minority are growing exponentially, so too is the gap separating the majority from the prosperity enjoyed by those happy few. This imbalance is the result of ideologies which defend the absolute autonomy of the marketplace and financial speculation (no.56). We have to say “no” to an economy of exclusion and inequality. Such an economy kills (no.53). As long as the problems of the poor are not radically resolved by rejecting the absolute autonomy of markets and financial speculation and by attacking the structural causes of inequality, no solution will be found for the world’s problems or, for that matter, to any problems. Inequality is the root of social ills (no.202). 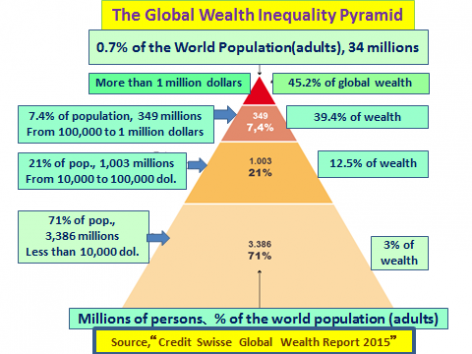 Consequently, the Pope urges political leaders to reform the present financial system with determination and an eye to the future (no.58).

Further, the Pope strongly refers to the inseparable bond between the faith and the poor. He also states clearly that each individual Christian and every community is called to be an instrument of God for the liberation and promotion of the poor, and re-asserts the relation between the Gospel and the economy (nos.48, 177, 187, 194, 199).

On February 17 we held the last session of the seminar. As we usually do, at the end of the session we asked the participants to write their comments and/or questions. Here are two quotations from those comments. “The remarks about the deep relationship between the economy and the faith made a strong appeal to me.” “Since I had never thought about the relation between the Gospel and economic inequality, I was deeply impressed by the very concrete way the Pope wrote about it.”

In the seminar series starting from April this year, we intend to consider the situation of our planet Earth and think about how to take care of it, with a focus on Laudato Si’, last year’s encyclical on the environment. The problem of the environment is not simply a question of segregating our trash or recycling our natural resources but, as the Pope writes, it is a question of life or death for mankind, a question about which we have to think and act with responsibility now.