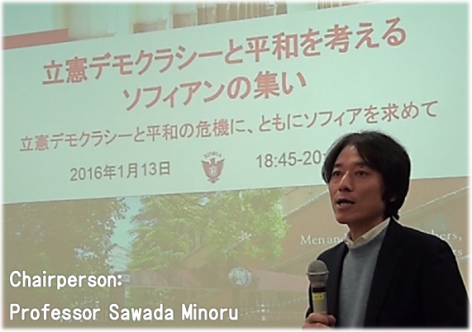 The gathering was chaired by Professor Sawada Minoru of the Faculty of Human Sciences. Professor Togo Takanori of the Faculty of Foreign Studies presented the meaning of the theme, and this was followed by lectures from Professors Shimazono Susumu (Faculty of Theology) and Nakano Koichi (Faculty of Liberal Arts). Professor Kayama Rika of Rikkyo University was invited as a special guest. After the lectures, university staff, graduates, and present university students who are members of SEALDs (Students Emergency Action for Liberal Democracy) conducted a series of relay talks. There was a lively exchange of ideas.

The Crisis of Constitutional Democracy and Peace
Professor Togo explained at the beginning how the launching of the Sophians volunteer group came about and what its objectives were.

This group was established last summer as “Concerned Faculty and Staff of Sophia University Denouncing the Forced Passage of Security-related Legislation and Demanding the Rejection of these Bills.” The aim of the group is to demand abolition of the legislation “passed” by the Diet in September 2015 concerning security issues and revocation of the previous Cabinet resolution of July 2014 re-interpreting and thus mutilating Article 9 of the Constitution.

In spite of the formation and objectives of this group, the reason it decided not to use “Security Treaty” in its name was to adopt a longer-range vision aimed at protecting the constitutional democracy and peace grounded in the present Constitution, since the aim of the group is to learn, reflect, and act. However, since the present government is planning an early substantial revision of the Constitution, the current aim of this group is action focused on this coming summer’s election of members of the House of Councilors (with a possible simultaneous election for the House of Representatives).

Here are resumes of the three talks given at the Conference.

Oppressiveness and Religion (Professor Shimazono Susumu)
Belonging to big institutions, one feels restrained, but when I came to Sophia University, I felt free. The Catholic Church is a large worldwide organization which, despite maintaining its strong structure and standards, remains free.

Japanese society today is oppressive. The present situation of politics and society, opposed as they are to constitutional democracy and peace, is overbearing. People who want to prevent others from getting together to think and express themselves freely are trying to manipulate society. They have links with profit-making economic and business organizations.

George Orwell in his novel 1984 delineates a future society that will supervise and control people even to the point of ruling over their thinking. People feel they are under pressure within institutions, but find freedom outside these. Examples of such people are the elderly, SEALDs, and women who are now opening up fresh possibilities.

We clearly state here the “Christian spirit” of Sophia University. I am neither Christian nor Buddhist but, as a scholar of religions and concerned for human rights, I think religion is very important. I feel that the oppressive direction of present-day Japan is a revival of state Shinto. The whole country is being moved toward building up an authoritarian “holy nation” in a return to pre-war times. That’s because it is thought that this will help maintain order.

Human rights implies giving importance to the life of each person. That means we must all be able to think and act for ourselves. This is what is being asked of us. How else could we be able to pass on to future generations what we have received from the past? Let’s proceed together not only at the university level, but also as citizens of Japan.

As Persons Searching for the Truth (Professor Nakano Koichi)
I came to work in Sophia sixteen years ago and now I consider myself a Sophian. Why is it that as a Sophian I clamor for safeguarding the Constitution and democracy? Why are the students (SEALDs included) and the university faculty and staff speaking out here and there? As a researcher and educator, I have strong ideas which I cannot overlook. Knowledge, if I may put it a bit pretentiously, requires searching for the truth. We want to approach as closely as we can to the truth.

Pressure from national power distorts the truth, and if the authorities start saying white is black, communication is no longer possible. The post-war consensus was that collective self-defense was not allowed by the Constitution, but if the government arbitrarily says yes it is, everything becomes possible.

All through my personal contacts with priests at Sophia and people connected with the Catholic Church, I have learned that education and research in Sophia are grounded in the dignity of the human person. Faculty and staff, students and graduates all agree on that. Wisdom is probed with the aim of contributing to a society in which “the dignity of the human person” will be safeguarded by all. Despite our different universities and religions, there are surely many people who feel as I do.
Up till now state power has been recklessly insisting, “Submit! Obey! We’re telling you it’s black, so it’s black!” In the face of this, one either keeps quiet and obeys or speaks out courageously saying, “There’s something wrong here!” In Japanese society, where involvement in politics is looked on as taboo, it is, frankly speaking, very difficult to protest.

Nevertheless, this is not a problem of politics itself but a problem of the present political arena. People are protesting because commonly held rules assumed to be at the very base of politics have begun to be broken. If we don’t protest now, when are we going to do so?

Why is peace important? It is because nothing destroys human dignity more than war. War destroys humanity systematically and totally. It destroys not only those persons who are killed but also those who kill. We cannot allow our future Japanese society to be forming people who are able to kill others.

Do the Right Thing (Professor Kayama Rika)
On August 29 last year, an assembly was held at an Anglican Church in Tokyo with the theme “Why do we oppose the security bills? —A message from volunteers of Rikkyo and Sophia Universities.” That was why I was invited here as a guest speaker.

A few days ago we conducted a “counter demonstration” against recent anti-Korean hate speech demonstrations. The rough language we used at the time lit a “fire” which still burns. We who oppose hate speech have been reprimanded and warned to be more careful with our own language. I cannot help it if my own rough speech is considered vulgar. What the other side is doing with their hate speech is discriminatory language directed at the minority and they cannot simply say, “You yourselves are doing the same thing.”

I have continually told students that in the academic field they should distance themselves from “relativizing” or “objectivizing” things and that in their papers they should present comparative investigation objectively, not based on subjective views. I myself have acquired that attitude even to excess.

When we encounter hate demonstrations and observe how the survival of minority people is actually put at risk, we can, of course, regard these demonstrations as psychopathic phenomena because what is said is indeed outrageous, but there is no time to lose. Since such attacks must be stopped, we too shout: “Stop! Go home! Shut up!” On becoming the target of such attacks, they stop their hate speech. Since I myself am part of the majority, what I say cannot be called hate speech.

If one happens to be on the spot, one must reprimand evil. I think the present situation has relativized and objectivized things and challenges my own objective view of things. As a free speaker and a clumsy university person I need to reflect on myself.

One other point, I feel the need to reflect on my own generation. I was born in 1960 and spent my university years during the 1980s. Those were the years which called for getting rid of structures. It was the post-modern and neo-academic era. It was an age when “everything is floating sign (signifiant)” and “everything has the same value.” It was an age of a certain kind of optimistic and relativistic value system. There was a consciousness that it was bad form to judge between black and white or to decide what is mistaken and what is correct. I myself got too involved in looking at things from a superior point of view, observing things as an outsider or cynic.

As free speakers and university people, we cannot abandon the posture of doing research while maintaining our distance, but surely there are times when, seeing what is going on around us, we must say “Isn’t this mistaken?” With regard to hate speech, this is nothing but erroneous. Even if the times or the prime minister changes, hate speech cannot be condoned. That is also true regarding war. War cannot be allowed in any age. There is no way to accept war. War also is erroneous, no matter how times may change. At present, with war about to occur, we must rise up and prevent it. I think the issue of nuclear plants is another such issue.

Relativists have the bad habit of saying things like, “Well, there are many ways of thinking, but this is a difficult issue.” My personal opinion is that the Mutual Security Treaty, hate speech, and nuclear plants are all evil. When taking action, I intend to say that what is in error is in error and to say NO to it clearly. I cannot stand a detached attitude like “I don’t know what justice is” or “History will verify things.”

Rightists now talk of irreversibility and, if we let them get away with it, the situation might actually become irreversible. There is no time to lose. Personally speaking, I have regrets about my own past. If we hesitate now, it might be too late.

This year’s Hakone long-distance relay race was won by our fellow-Christian university, Aoyama Gakuin. Sophia and Rikkyo did not participate in the relay, but we have to keep passing on the runner’s peace-sash (baton). On January 21 we begin a series of lectures entitled “Peace Message from Rikkyo.”

Recently I have come to like the Spike Lee film Do the Right Thing, which splendidly portrays opposition toward racial discrimination. I ask myself, “Am I doing the right thing?” Let’s move on together, making sure that what we are doing is the right thing. 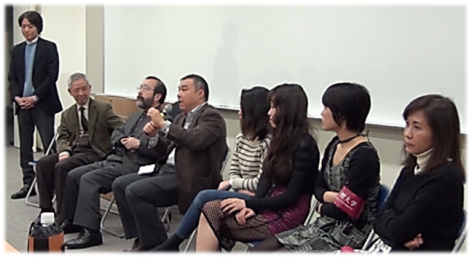