On December 28, 2015, the Foreign Ministers of South Korea and Japan held an official meeting on the issue of the Japanese military “comfort women” and declared that the issue has been resolved finally and irreversibly.

The United States State Department immediately hailed the decision of both governments, and most of the mass media, both in Japan and abroad, were sympathetic toward the mutual decision to bring the long-unresolved issue of military “comfort women” to a final conclusion.

Nevertheless, public opinion in South Korea is split with regard to this political settlement. Youth especially are strongly opposed to the agreement. Their reasons: ①Since no conversations have taken place with the halmoni (grandma) victims, this was not a people’s agreement but only a “closed-door decision.” ②The agreement sidesteps the Asian Solidarity Conference’s proposal to the Japanese government and does not include “legal responsibility.” ③With this agreement the Japanese government has shifted its responsibility to the Korean government and can be called “historical bribery.” ④The attitude of the Japanese government immediately after the negotiations, demanding the removal of the “young woman’s statue” and declaring that “there will be no more apologies,” cannot be considered a sincere attitude of an aggressor country toward its victim country. Moreover, the assertion that the agreement is final and irreversible is unacceptable. ⑤There is not a single word with regard to education and continuing remembrance of the historical facts. ⑥Japan’s Foreign Minister Kishida Fumio stated after the negotiations, under American political pressure, that the basis for cooperation regarding mutual security by Korea, the States, and Japan had advanced a further step forward. However, the fact that security had been selected as a priority, over the human rights of the victims and restoration of their dignity and honor, has given rise among many Koreans to a sense that they have been betrayed by their own government.

The Asian Solidarity Conference, an organization comprising the supporters and victims of Japanese military sexual practice, was established to search for solutions to issues concerning the Japanese military “comfort women.” In 2014, at their 12th conference, they passed a resolution on a “recommendations to the government of Japan” to recognize its responsibility and the following historical facts: ①That the Japanese government and Military proposed, established, managed and controlled military facilities known as “comfort stations.” ②That the women were forced to become “comfort women / sexual slaves” against their will, and were kept in coercive circumstances in the “comfort stations” etc. ③That there were various forms of victimization of women from the colonies, occupied areas and Japan who suffered sexual violence by the Japanese military, that the scale of victimization was extensive, and that the suffering continues today. ④That it was a serious violation of human rights which contravened a variety of both domestic Japanese as well as international laws of the time. 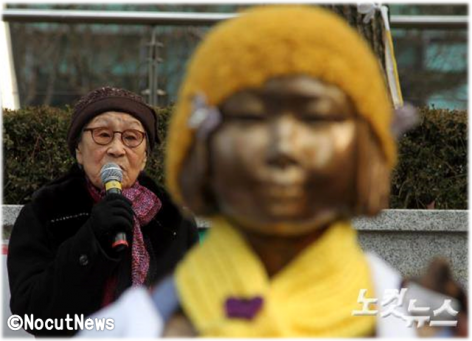 Bishop You Heung-sik, President of the CBCK (Catholic Bishops’ Conference of Korea) Committee for Justice and Peace, released a statement on January 4, 2016, opposing the Settlement between Korea and Japan on “Korean Comfort Women.” The statement stresses that the “settlement” trampled on human rights with the logic of economy and diplomacy. Nothing can be final and irrevocable with the matter on history and human rights.

The message states that “Wrongdoers cannot experience authentic justice and love until they sincerely atone for their mistake, making compensation for the inflicted harm. In this way, the victims also can in divine mercy be ready to forgive them. This is the beginning of the full process of forgiveness and reconciliation. In this regard, the settlement cannot but be accepted as the result of economic and diplomatic logic under the pretext of resolving a current issue between Korea and Japan, because it trampled down fundamental human rights, one of the most important and universal values surpassing all other things.”

Again, “the Catholic Church as well as the conscience of humanity has explicitly manifested that there is no statute of limitations on the issue of human rights and war crimes. The forced sexual slavery by the Japanese military during World War II, a systematical infringement upon human rights committed by Japan as a nation, is a grave crime against humanity. Therefore, the issuance of a settlement on the so-called final and irrevocable pardon for the war crime of Japan, obtaining no consent from the victims themselves, is a great challenge to the conscience of humanity and historical experience.”

History should not be hidden or forgotten, but rather remembered. When it is revealed, people can recognize their failures and go towards the realization of love for humanity and common good in doing so. The true development that Korea and Japan should pursue is to seek forgiveness and reconciliation for peace and justice by remembering and reflecting on the crime. Once that is attained, “We urge the government to consider again the issue of Japanese military sexual slavery, the case of the definite violation of human rights, on the basis of the human dignity of all including the women victims, and fundamentally to re-examine the matter.”

Bishop Katsuya Taiji, President of the Japan Catholic Council for Justice and Peace, issued the following statement on January 15, 2016: “Apologies to the victims who were forced to become ‘comfort women’ for the Japanese military should be properly made so that the honor and respect of these victims can be recovered. Apologies offered so far have not met the expectations of the victims, who have been left out of the negotiations.” Given that the apologies are insufficient, there is danger that, if the recent agreement should be taken as “final and irreversible,” future demands from the victims to be given true apologies will be silenced.

Again, “Apologies manifesting responsibility for past errors are made with the assurance of not repeating the same acts. In that way, final irreversibility is not possible. Past errors are carved into history and they need to be continually remembered. So apologies are always given from the side of the guilty.” “It is not possible to deny such historical facts, and when these facts continue to be remembered, there is hope regarding the future.” 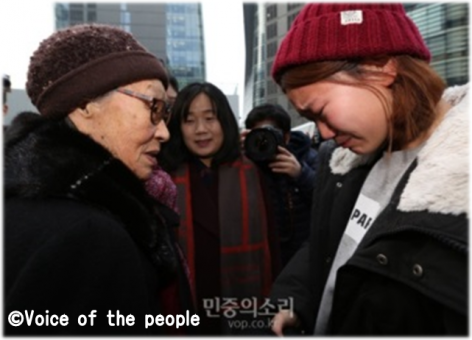 For the sake of peaceful friendship between Japan and Korea, the problem of “comfort women” is a priority issue which must be solved, while even just one victim remains alive. Making a fast settlement under time pressure is simply an empty show. And in order to enable the past official compromise to lead toward a solution to the problem, the regrets and apologies of the Japanese government should be offered in ways acceptable to the victims. Rejection of official remarks denying Japan’s responsibilities, acceptance of the facts by former Chief Cabinet Secretary Kono Yohei, and a resolute attitude against xenophobia should have been reaffirmed. The following must also be considered: the recovery of the honor and dignity of the victims, and, in reference to programs oriented toward the healing of hearts, the government of Japan should release all pertinent materials and should investigate related documents inside and outside Japan, examining also the truth of hearings conducted among victims, wherever they are. All this should also be included in general as well as formal education, by including the historical facts in school textbooks.

The “comfort women” victims of the Japanese army include not only women of South Korea, but also of Japan, North Korea, Taiwan, China, the Philippines, Indonesia, and other Asian and Pacific countries, and even Holland. We cannot forget the fact that many have died without their names being known. I think that citizens of Japan, the guilty country, should also continue to raise their voice and monitor whether the response of the Japanese government is in accord with human conscience.