I would like to introduce here the educational situation of Timor-Leste as well as our own Jesuit educational mission here, which aims at forming “people who practice justice rooted in faith.”

Since acquiring its independence in 2002, Timor-Leste has faced many challenges in the field of education. In 2013, it started a new system of compulsory and free education for the 9 years from age 6 to 15, thus unifying six years of primary education and three years of pre-secondary education. However, amid the rapid increase of students due to the high birth rate, it is taking a great amount of time to make up for the deficit of school facilities and teachers lost during the Indonesian occupation. Children in rural areas especially have limited access to sufficient secondary education.

Language is another challenge in the field of education. While about half of the adult parent generation are illiterate, their children have to learn English as well as the official languages, Tetun and Portuguese. They also study other subjects but have only a limited distribution of textbooks, all in Portuguese.

Domestic or local poverty and lack of parental understanding about the importance of education sometimes result in children being occupied in housework and wage-earning. What’s more, the time and money needed to commute over underdeveloped roads, malnutrition due to the simplicity of daily meals, the rapid decadence of youth culture, and the government’s inadequate planning and management of school facilities and teacher training are all factors in the low learning achievement of students. In fact, quite a few students drop out along the way.

This was the situation when our Colégio de Santo Inácio de Loiola opened in 2013 as a new unified Jesuit secondary educational institution in a fishing village about 20 km from the capital Dili. In 2016 this school will have about 420 students, degree 7 to 10. Those walking from the local villages and those coming on the school bus from Dili or other districts study many subjects together. In order to provide quality education to children in underprivileged situations, the school is also pouring energy into scholarships and enrollment support (learning support) for children in rural areas.

Since April 2015, I have been teaching music and art, religious and moral education. I am also in charge of one class at this school. At the same time, I am learning a lot from the students and teachers through a variety of experiences and encounters. 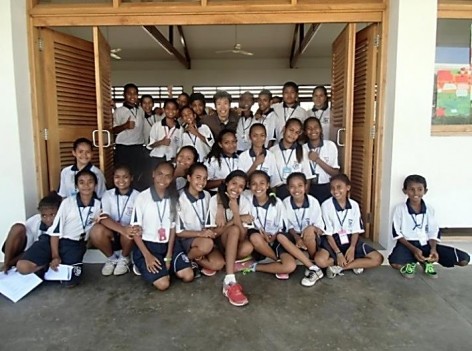 The educational mission of the Society of Jesus was initiated by St. Ignatius, its founder, as one means for the greater service of God and others, not only as a contribution to the human development of students, but also to defend the Christian faith which was constantly under attack at the time. Our Jesuit educational philosophy is deeply rooted in the training we ourselves have received as Jesuits from our novitiate days—that is to say, to form “persons open to action” who can implement a faith and justice grounded in the love of Christ. My present challenge is to put this educational philosophy into practice for the faith and the future of the people of Timor-Leste.