CAM 2015 Hong Kong
Over 100 years ago the Belgian Cardinal Joseph Cardijn founded the Young Christian Workers (YCW/JOC) movement, which has expanded all over the world, including Japan. The headquarters of the International YCW General Secretariat are in Belgium and there is a secretariat on each continent. YCW Japan belongs to the Asia-Pacific region (ASPAC), which has its Secretariat in Hong Kong.

World delegates of the YCW International Council meet every four years (like the Olympic Games). In 2012 they met in Ghana and are scheduled to meet in Germany for their 2016 gathering. In the meantime, they continue to implement their four pillars of International Plan of Action (IPA): Just Work, Social Protection, Gender Equality and Quality Education for all.

In the Asia-Pacific region, a Continental Action Meeting (CAM) takes place every two years. The Philippines was the host country in 2013 and in October this year the meeting took place in Hong Kong. I was a delegate from Japan together with a leader from Sapporo (Hokkaido) YCW.

True to the name CAM, members from every country report on the activities of their YCW units, analyzing them from the standpoint of their political, social, economic and cultural systems. Faced with the situation of young modern workers as seen through that analysis, and with special consciousness of the four-pillar International Plan of Action, the gathering moves to decide on a Continental Plan of Action. 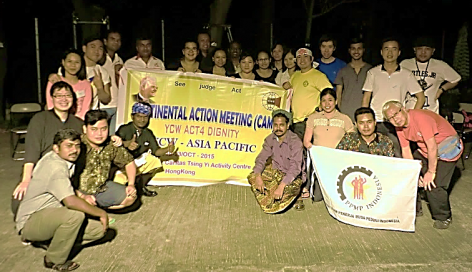 YCW Activities Asia-Pacific Region
There are eight countries represented under the jurisdiction of ASPAC: Pakistan, India, Siri Lanka, Indonesia, the Philippines, Japan, Australia and China. Among these, China is called an extension country and is treated as an associate member. Formerly, other regions, like Thailand and Hong Kong, were also YCW members, but they are no longer represented. Regrettably, delegates from Pakistan and Sri Lanka were not able to attend the CAM. On the other hand, the presence of a young worker from mainland China gave us great joy.

The delegates explained the YCW activities in each country and the issues faced by young workers there. Let me report on each area.

PHILIPPINES:
The delegate spoke about YCW activities regarding the improvement of labor conditions for young workers in gold mines and the protection of the rights of pedicab drivers. I was especially surprised at the fact that 10-year-old children were still working in mines. They work under extremely severe conditions, and it is not surprising that some lose their life in accidents due to falling rocks.

AUSTRALIA:
YCW Australia works mainly for the protection of the rights of refugees and asylum seekers, migrant workers and foreign students. Since such foreigners suffer from bias and discrimination they remain on the social periphery. Thus, YCW workers make efforts to promote change through social awareness.

INDIA:
Youth unemployment in India is quite severe and YCW members work especially for the promotion of job employment and the support of new enterprises. At the same time, due to the fact that many children do not have access to education, child labor is rampant. Indian delegates stressed the importance of education.

INDONESIA:
Indonesian YCW members, working in a big textile factory, told us about the campaign they had several years ago to protect the human rights of workers. The result was that they were all fired. They continued fighting the factory and finally opted for opening a clothing shop together with other workers dismissed by the factory.

CHINA:
The Chinese YCW Chapter has just started and is not well established. Due to the delicate political situation, I cannot report on their concrete activities. Nevertheless, I had the opportunity of talking with a young Chinese worker. Despite the bad diplomatic relations between Japan and China, at a personal level we were able to discuss mutually relevant historical facts and ways to restore good relationships. It was a very fruitful personal meeting.

Regarding the countries unable to send representatives, ASPAC staff members who had visited them reported on their activities. YCW women members in Sri Lanka mainly work in clothing factories and are active in promoting the rights of the workers. Those in Pakistan are mostly young brick factory workers under 16 years of age. Added to long working hours with low salaries, brick making is dangerous and often exposed to labor accidents. Therefore, YCW members are active in demanding social security and safe labor conditions. We were shocked at hearing about problems like the continuing low social status of women and the custom of selling children in order to pay off incurred debts.

YCW Japan is a bit different from that of other countries. One characteristic, for example, is that it is not divided into groups according to profession or gender. The same group includes regular and part-time workers, the unemployed, students, the sick and the disabled. With regard to young people, concrete demands differ. Thus, we cannot be compressed into one single struggle. However, I feel that a common denominator among youth is the great difficulty they face in establishing communication among themselves and with other people. Young people psychologically affected by an over-competitive society that gives exorbitant value to economic profit, talents and results suffer from low self-esteem and loneliness. I reported that YCW Japan is determined to build “safe places” in order to struggle together with young people who accept themselves as they are.

Struggle for Human Dignity
CAM faces many difficult issues. One major issue is how to build up coordination among ASPAC. In attempting to build up such a system, they quickly come face to face with the language barrier and a lack of financial resources.

In planning the Continental Plan of Action (CPA) with an eye to next year’s International Council, the theme “Dignity” was spotlighted. Young workers, deprived of their dignity, live within a violent capitalist and neoliberalist system. Sharing the same faith as Cardinal Cardijn, we believe that “Every young worker is worth more than all the gold in the world.” We decided on an action plan to obtain Decent Living Income (DLI) through Social Protection and Just Work, so that all people could be able to lead their life with dignity.

Foreign Domestic Workers in Hong Kong
Whenever CAM meets, there are always exposure programs. The delegates visit YCW activities and young workers in the countries where they meet in order to know their situation there. For instance, when the gathering took place in the Philippines two years ago, they visited pedicab drivers and heard of their work and life conditions. Hong Kong does not now have a base group of YCW, but we were accompanied to the large Victoria Park, where many young Indonesian women had gathered. They had gone to Hong Kong to work as “domestic helpers.” Members of two Indonesian labor unions spoke to us about the situation of domestic helpers in Hong Kong.

They are employed at the lowest wages (4,210 HK dollars per month) and have to endure serious sexual and power harassment from the owner of the house where they live. In fact, there are reports of all kinds of abuses but, considering the fact that families are closed spaces, what public information that can be had is just the visible peak of an iceberg. (Even in Japan there are discussions about foreign domestic helpers and, listening to their vivid stories, I felt that in Japan, a backward country with regard to human rights, the use of such a system would be practically impossible.)

Within the given situation in Hong Kong, domestic helpers get one day a week free from their masters and gather in Victoria Park. There they share their cooking, chatter together with their friends, play, sing and dance. They also learn the Koran and study about the rights workers are supposed to have. 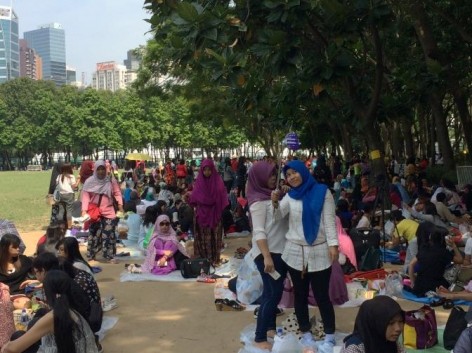