Visit to Japan of Frs. Patxi and Benny

During their 9-day stay in Japan they met with various groups of Jesuits, those living in SJ House at Sophia University and in the Jesuit Scholasticate, and those who gathered for a special meeting at Kibe Hall in Yotsuya organized by the Jesuit Social Center. They also participated as guest speakers and panelists in a special symposium “Laudato Si’ and COP21” held at Sophia University, as well as in the 35th International Symposium “Who controls Food and Agriculture? New Challenges for Social Movement, Democracy and Human Rights in a Global Era,” sponsored by Sophia University’s Institute of Global Concern and International Christian University’s Social Science Research Institute.

After their busy schedule in Tokyo they moved to Nagatsuka in Hiroshima, where Fr. Pedro Arrupe, former Jesuit Superior General, lived as novice master during World War II. In Yamaguchi and Shimonoseki, their last stops in Japan, they met with Jesuits and collaborators working in that region.

At the Jesuit gatherings Fr. Patxi explained the social and ecological involvement of Jesuits in the five continents of the world. In Africa, where armed incidents continue amid religious and tribal differences, their main activities revolve around peace and reconciliation. Refugees and HIV/AIDS patients are also an important target of Jesuit involvement. In Latin American countries, the main common concerns are the human rights of aboriginal people and migrant workers, along with ecological issues concerning natural resources and water in the vast Amazon region. In South Indian regions, Jesuits promote the education and human rights of various races, tribal people, the discriminated, and migrants. They also deal with the labor problems faced by those working in mining.

Fr. Benny spoke about the East Asia and Pacific region with all its issues of multiple languages and cultures. The social apostolate in this region started from private initiatives and then developed locally. It requires special knowledge regarding the various fields. Manpower has become limited and the building of networks continues to be difficult.

A few years ago, this Jesuit region drew up a “mapping” report to focus priority issues for involvement by the social apostolate. As a result, communication inside the region improved. The network for migrants in the region is especially active at present. Additionally, environmental and ecological issues and exchanges among mining workers are developing. Fr. Benny said that cooperation with the Jesuit Refugee Service will be strengthened and he hopes to promote activities for scholastics to gain experience in these social fields. 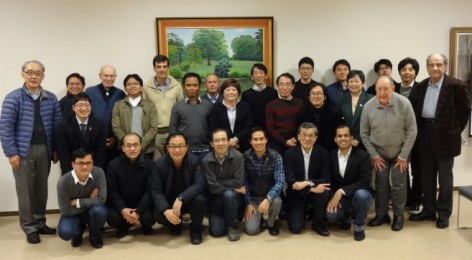 It was very meaningful to have Jesuits from the Jesuit headquarters in Rome and from the Asia Pacific Conference, both working in such important fields, to participate in the two symposiums at Sophia University, where there are so few Catholics working and teaching. It is also worth mentioning that the booklet published and edited by Fr. Patxi, “The Promotion of Justice in the Universities of the Society” (Promotio Iustitiae, no.116), was translated into Japanese by the Jesuit Social Center and has been distributed in the university. I think it was quite significant to have Fr. Patxi personally explain the directions a Jesuit university is expected to take. Particularly, in our confrontation with society, he stressed the need to make ethical decisions by walking along with “the little ones,” without sitting back. I received the impression that many sympathized with his remarks.