A Happy Christmas and New Year !!

Many people speak about peace. But there are very few people, especially among the leaders of this world, who are really peacemakers. Wars and conflicts between countries or within the same country, as in Afghanistan, Iraq, Israel and Palestine, Syria, and so on, never come to an end. At the United Nations there are many speeches about peace. But when it comes to a vote on the abolition of nuclear weapons, which many countries are in favor of, the countries that possess and maintain these weapons always vote against their abolition.

The Japanese people, sincerely aspiring to international peace, forever renounced war and the threat or use of force as a means of settling international disputes (The Constitution of Japan, Article 9) and they have kept to this decision for 70 years. But the present government, while talking again and again about peace, one-sidedly changed the interpretation of that article and rammed through the Diet new security-related bills approving the right to collective security, thus allowing for the Self-Defense Forces to go to the aid of any ally under attack, as well as for exportation of weapons etc. If the peacemakers are blessed, what will happen to the members of the present government who are moving in exactly the opposite direction?

Many people in Japan, including scholars, writers, lawyers, and so on, have continued their activities for peace and have risen up against the law rather than give in to the government party’s anti-democratic actions. Thousands of people have held demonstrations against the proposed laws around the Diet and in more than 200 places throughout the country. Students from several universities formed a group called “SEALDs” (Student Emergency Action for Liberal Democracy), participated in those demonstrations, and also carried on a hunger strike. High school students, too, inspired by SEALDs, formed their own group called “T-ns SOWL” (Teens Stand up to Oppose War Law) and carried out their own demonstrations. One of the founding members of SEALDs received a letter threatening to kill him and his family. People working for peace are blessed, but also persecuted. 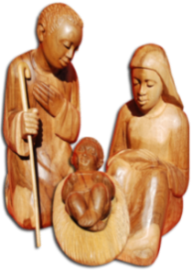 The message of Christmas is a source of hope precisely in these occasions. It is a message which tells us that God, seeing the miserable state of the human race, with some using other people as slaves, and others hating and killing one another, decided to become one of us (Matthew 1: 23) so as to show us, through his words and his way of living, how to become authentic human persons, namely, how to forgive, how to help and support one another and live in peace. He also showed us that all this is possible.

As we celebrate Jesus’ birth, we renew our hope and strengthen our commitment to be peacemakers, whatever the situation might be around the world or in Japan.