Personal Impressions of My First Visit to Jeju Island

After landing at the Jeju Island airport we headed to Saint Francis Peace Center in Gangjeong Village. We were going to attend the Gangjeong Peace Conference there. At the same time we were to hold a one-day meeting with Korean Jesuits involved in the social apostolate in order to plan common programs. After leaving the town near the airport, the spacious rice fields made for a peaceful atmosphere all around. 67 years ago this island, which now looks so peaceful, was the scene of the very violent April 3 Incident.

Back in 1945, when the Korean peninsula became independent from Japan, the Soviet Russian army invaded the northern part of the peninsula and the American army the southern part, both of them hoping to establish a new government there. In the midst of this division of the peninsula, a movement arose opposing that political situation. The Americans considered it a Communist infiltration and clamped down on it. On April 3, 1948, those opposing the division of the island provoked an armed revolt on the island. This is known as the April 3 Incident. The American army considered Jeju Island a “red island” and sent military battalions stationed in Korea to Jeju to repress the move. On August 15, 1948, after the independence of the Republic of Korea, its President Syngman Rhee continued repressive military operations. By 1954, when the operations ended, about 280,000 Jeju islanders, including 30,000 civilians, had been massacred.

This incident came to mind as I was looking at the rice fields from the window of the car in our way to Gangjeong Village, where a naval military base is being built. This base, built by the Korean navy, will house American navy military personnel. Thus, it is clear that American forces will come there. Getting out of the car, we could see yellow flags around the village. We were told that those opposing the building of the naval base on the island had raised yellow flags in protest. 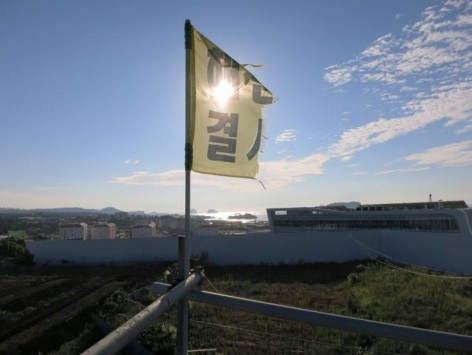 Second Gangjeong Peace Conference
The Second Gangjeong Peace Conference began. The aim was to strengthen links between Jeju and Okinawa in order to establish a “demilitarized peace island zone.” The participants included activists from Jeju Island and the Korean peninsula, Okinawa, Kyoto, and Tokyo, together with priests and religious. Experts and activists shared their views and group discussions were held. Proposals were also offered regarding activities to spread the establishment of “demilitarized peace island zones” around the islands of East Asia, with the hope of probing possibilities for networking among these islands.

I had the feeling that a strong solidarity movement was lacking on Jeju Island against the naval base within Gangjeong Village. Thus it is an urgent issue to insist on strengthening the opposition movement within Jeju more than to expand it abroad. I heard that at the last elections for governor, the candidate favoring the building of the naval base at Gangjeong Village was elected governor. This seems to me to show that the majority were in favor of the new base, or that most were unconcerned, or that it was not an urgent issue. Would it not be necessary first of all to obtain a consensus regarding opposition to the naval base within Jeju Island?

There was also something else that caught my imagination. It happened when I was about to enter a shop near Saint Francis Peace Center. Several ladies opposed to the building of the military base advised me not to buy anything at that shop. Pointing above toward the sky, they said, “This house has raised the Korean flag, which means that they support the construction of the naval base. We should not buy anything from them.” I realized then that those opposing the military base boycott people favoring the construction. 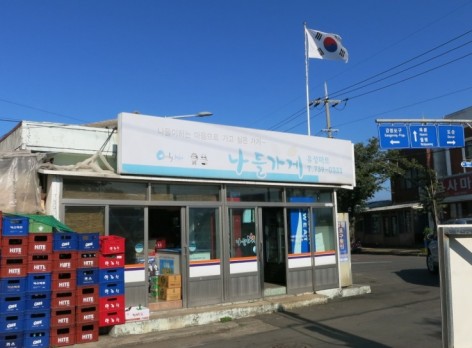 Villagers Divided
Later I heard that in Gangjeong Village there was division between the two factions. The construction of the base has brought about antagonism between the villagers. I could feel that on several other occasions. For instance, people opposing the new naval base conducted sit-downs in front of the main gate through which dump trucks went in and out blowing their horns or revving up their engines noisily and threateningly. On the other hand, I was told that there was only one restaurant in the village but, walking around, I found several. I asked about this and found out that there was just one restaurant open on the opposition side. 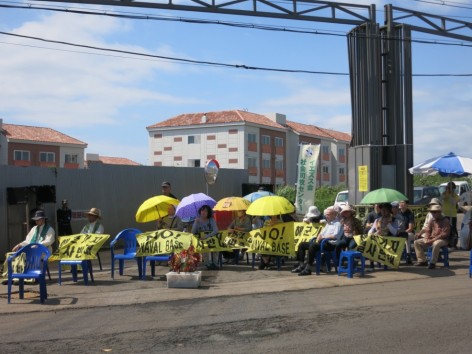 The Gospel of Matthew records the words of Jesus, “Do not think that I have come to send peace upon the earth. I have come to bring not peace, but a sword” (Matthew 10:34). I think Jesus is saying that Gospel values give rise to friction with worldly values. The divisions at Gangjeong Village and the struggle going on between the opposing factions, those trying to stop the construction and those supporting the new naval base, show that this is an inevitable phenomenon that occurs when we try to implement Gospel values. Jesus also said, “Love your enemies; do good to those who hate you” (Luke 6:27). Theories of social reform in the shape of stirring hatred do not fit our Christian ways. We cannot accept them. I believe that we should embrace all enemies in a spirit of profound peace and love.

Korean and Japanese Jesuits Meet on Common Social Issues
After the Peace Conference, a meeting of Jesuit social apostolate members was held to find common ways of mutual cooperation between Korea and Japan. That meeting became one major milestone of collaboration with regard to social involvement in both countries. I felt that each country has its own difficulties about working together, but nevertheless we looked for various possibilities.

It was decided that a similar meeting would take place next year to continue to get to know one another better. Such mutual cooperation on social issues could be compared to the beginning of solidarity at a theoretical or “head” level, which hopefully will later spread to the “feet.” For instance, a mutually organized seminar will deepen solidarity and after that the follow-up or concrete implementation could be considered like the “feet” in the process of cooperation. The meeting closed with joyful hopeful. 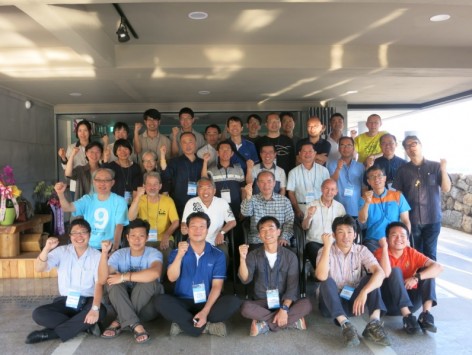 Saint Francis Peace Center and a Jesuit community house have just been built in Gangjeong Village. I believe that these offer a testimony of solidarity and hope to the villagers suffering from problems occasioned by construction of the naval base. The decision to come to the village to accompany the villagers in their trouble with the new base will give them courage to confront their problems. I hope that the peace movement to establish links among islands in East Asia desiring peace in that region will spread wider through Gangjeong Village itself, where the Peace Center is located. 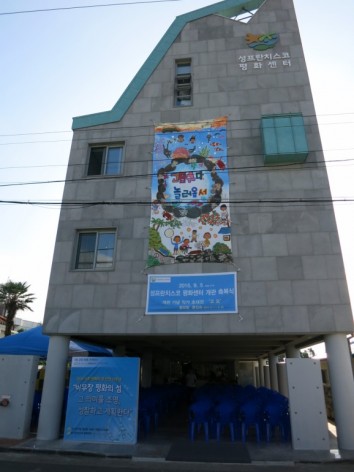