During the Indonesian occupation period [1975-2002], the Catholic Church in East Timor played an important role in appealing to the international community for the liberation and autonomy of the nation. The cross-carrying pilgrim group, Crus Joven, initiated in the 1990’s at the proposal of Nobel Prize winner Bishop Carlos Filipe Ximenes Belo, paraded throughout the nation every year, carrying the statue of “Our Lady of Pilgrimage” promoted by St John Paul II, the Pope at that time, and voicing people’s earnest longing for liberation and peace. It is said that even the Indonesian troops refrained from attacking these pilgrims. When they came, all the villagers turned out by the roadside to see them.
This year, 2015, East Timor celebrates its 500th anniversary of Christian evangelization. With special insistence on post-independence spiritual formation of young Timorese, Crus Joven is now going around the country, calling on people to promote the Church’s aspiration for peace and faith, so that the true value of peace grounded in faith may not go forgotten. 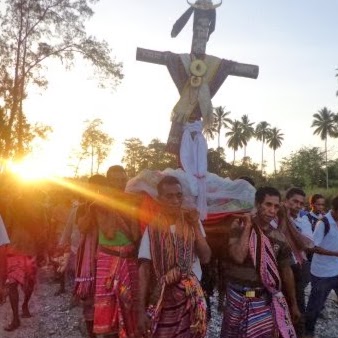 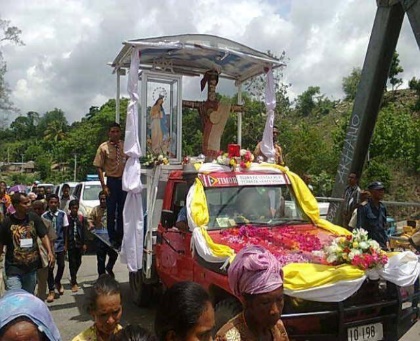 Mere exclusion of violence is not equivalent to peace. When we break out of the shell of our egoistic self, we come to realize the value of joy, which enriches us the more we give it. When we decisively share responsibility for the poverty and suffering of others, which is unable to be shouldered thoroughly, peace begins to have its immortal significance.
The peace which this world provides simply means excluding opponents’ interests, thoughts, and violence, and building a totality of self-sufficient individuals, whereas the Peace of Christ starts by forgiving, recognizing, and saving sinners buried in oblivion and death. Our simple practice of a kind word, a smile, or any small gesture which sows peace breaks with the logic of violence, exploitation, and selfishness (cf. Pope Francis, Laudato si’ no.230) . To exchange continuously the greeting of peace without either denying or ignoring conflicts caused by the diversity of people—this creative commitment in defiance of egoistic gravity is the challenge to which I feel called now in East Timor.