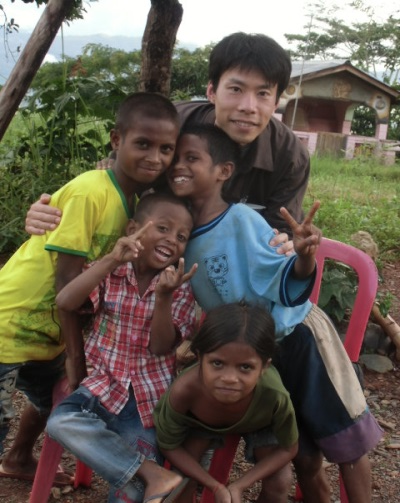 Until February of this year, while I was living in Tokyo, I was in charge of the “Catholic News in the World” section of this Social and Pastoral Bulletin, but in March I was sent to East Timor to work in the new Jesuit secondary school for two years. I continue my Jesuit formation there, committed to be of greater service searching for God’s will in the midst of the various challenges of my new mission.
East Timor is a small young country which gained its independence in the year 2002. Even though it is located between Australia and Indonesia in the southern hemisphere, there is no time difference between East Timor and Japan. While bearing the painful history of colonization by Portugal from the 16th century to 1975, by Japan from 1942 to 1945, and by Indonesia from 1975 to 2002, East Timor has been searching for its own sustainable development since gaining independence and peace nearly 10 years ago.
East Timor is almost as large as Tokyo together with its three neighboring prefectures. Its population is approximately 1.2 million, of which 50 percent is below 20 years of age. While traces of damages from the last war for independence still remain, the birth rate in this country is 5.7 percent (!) according to the National Statistics Directory, Timor-Leste in Figures 2012. More than 95 percent of the Timorese are reportedly Christian and most of them are Catholic.
Shortly after my arrival in March, I had an opportunity to stay in a local village for 10 days. My experience there was totally different from my past life in Japan where electricity, water supply, telephones, and the Internet were always at hand. Houses and food in that village were quite simple and humble, but the people were very energetic and dynamic as well as warmhearted. Almost all the people in the village gather together to attend Mass every Sunday.
An urgent issue at present in East Timor is post-independence reconstruction and development, particularly regarding education for younger generations. I hope I may continue to search for God’s will so that we Jesuits may offer ourselves more to the service of faith and the promotion of justice.