Aiming at Societies without Poverty and Income Gaps

On April 29 some 100 people gathered at the facilities of the Nicolas Barré Center in Yotsuya (Tokyo) to begin the Christian May Day Rally 2015. Once a year on around May 1, Christians demanding “human life and labor” assemble for a rally. This year was the 13th such rally. Cosponsoring organizations have increased. This year the following organizations participated in the May Day Rally: the Tokyo Catholic Commission for Justice and Peace, the Christian Workers Movement (CWM/ACO), the Young Christian Workers (YCW/JOC), the Catholic Social Research Center and the Jesuit Social Center.
Every year the gathering aims at building a peaceful society by studying the situation of workers and their rights and at strengthening their solidarity through prayer and action. This year’s motto was “Aiming at Societies without Poverty and Income Gaps.” Thus, the “poverty gap,” so serious in Japan as all over the world, was given prominent attention.

The History of May Day and Modern Japan
May 1 began to be celebrated as “Labor Day” at the end of the 19th century. It arose from workers’ movements demanding an 8-hour workday as a result of the hardship of long hours of work imposed on workers. May Day rallies started from Chicago and spread all over the world, so that May 1 became Workers’ Day. The rights of workers were demanded and solidarity continued to be sought. Hoping for “human life and work,” a long history of struggles, in which many workers have literally bled, has continued up to now.
But, on the other hand, the Japanese economic and political landscape seems about to reverse those hopes. Unstable employment, where about 40% of all workers have become irregular, low wages (1 out of 6 is poor), depression, death from overwork, and suicides among workers in Japan suffering from long hours work, prevail. It is disgraceful that the Japanese word “karoshi” has become so famous that is even used in many other languages. Nevertheless, advanced legislation on “unpaid extra work” except for white collar workers is being ridiculed as “karoshi-promoting law.”

Workers’ Voice
The first part of this year’s Christian May Day Rally started off with a vivid report from the field by 3 speakers on the situation of workers.
The first speaker, Mr. Ishikawa Masashi, chairman of the “Syutoken Nakama Union (Tokyo Area Companions Union),” commenting on “French economist T. Piketti and Poverty in Japan,” presented the labor policies of the Abe government and described the poverty issues Japanese workers are facing now. With the help of statistics showing how big companies are making great profits while the poverty of workers is not diminishing but, on the contrary, is growing, he denounced the situation of widening income gaps. Nevertheless, Mr. Ishikawa gave his clear ‘NO!!’ to the present official policies which worsen the labor environment, and thus punish workers, by prioritizing business profits. He stressed forcefully that it is possible to change society. 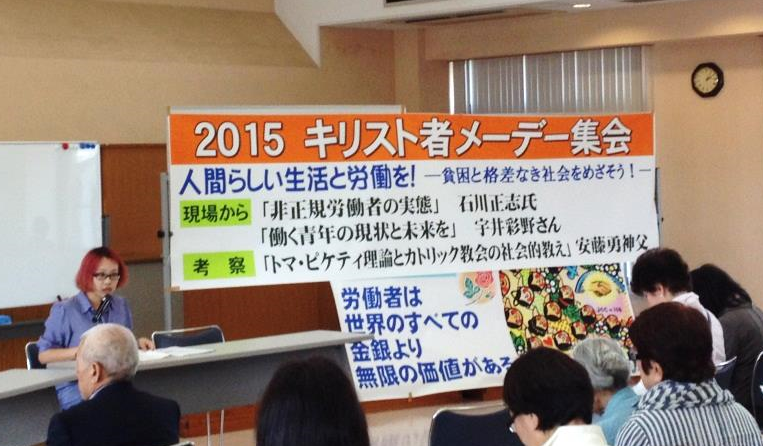 The second speaker was Ui Ayano, JOC’s current president. She presented the JOC action “to aim at developing one’s personality in companionship with other members, by sharing experiences within a spirit of mutual human respect.” Many young workers today destroy themselves, physically and mentally, within a society which does not permit failure and thus becomes distrustful. Her analysis included her feelings with regard to the problem of a deep fear of being related with other people, which seems to be caused by the experience of being hurt and continually attacked because mistakes are not allowed, instead of being socially recognized by others in a relaxed atmosphere. We cannot trust others living in a society that is naturally unfavorable to people. In spite of that, however, it is possible to grow and we are able to meet with many persons who can change and grow, and we believe in the possibility that society can also improve. JOC keeps alive its hope regarding all these and therefore continues working together. 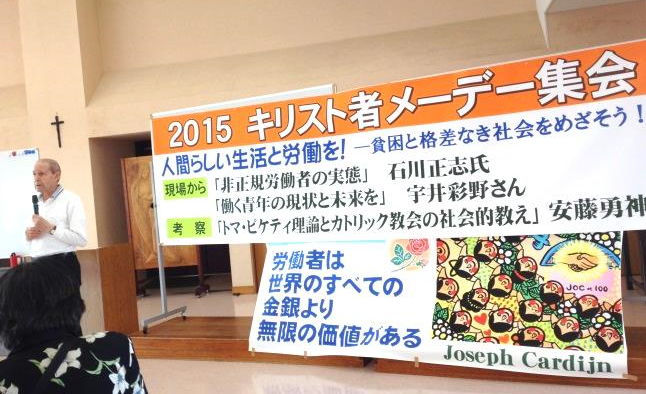 Finally, Fr. Ando Isamu of this Jesuit Social Center explained the economic market system commenting on recent Catholic social teaching especially in Pope Francis’ apostolic exhortation “The Joy of the Gospel.” Catholic social teaching has consistently asserted that the value of the human person is due to the fact that he/she has been created in the “image of God.” Thus, the human person has a preference over all other creatures, is the “summit” of all creation. Being loved by God the human person knows God and is able to love God. But, in spite of this, the present economic system considers a portion of society as excluded, “thrown away” persons – they are no longer even part of it. They are the outcast, the “leftovers.” (“The Joy of the Gospel” no.53) God loves each human person. God has given Nature and all its resources to everyone. Consequently, it is not good that only a fraction of humankind, the wealthy ones, use resources of nature as they wish. God loves the poor but dislikes poverty and wants poverty destroyed. That is the main reason why “the Church dedicated to the poor” must go out into the world. This message of Pope Francis closed the session.

Mass Prayer to Demand Workers Solidarity
The second part of the program consisted of a Mass to pray for closer solidarity among workers. Fr. Ando, using again “The Joy of the Gospel” in his homily, repeated that God desires a society where human persons are respected and not an economically efficient society. This is the world offered by Psalm 8. And quoting the Gospel reading of Jesus’ parable of the workers in the vineyard (Mathew 20:1-15), where the jobless workers complain that “nobody employs us,” Fr. Ando stressed that the most important need they had was not welfare or charitable assistance out of compassion but to be given jobs so that they could be able to support themselves.

The Restoration of the Dignity of Labor
May 1 is not only International Workers’ Day but also the celebration of “St. Joseph the Worker” in the Catholic Church. St. Joseph, the foster father of Jesus Christ, supported Jesus and his mother Mary with his hard work as a carpenter. Back in 1955 Pope Pius XII dedicated May 1, Workers’ Day, to St. Joseph the patron of workers.
Labor is one of the most basic activities for the human person to survive. The reward from labor helps people live and raise a family. Through labor human persons also grow in their faith. All things surrounding us are mostly the result of human work and, although we are not always aware of it, our work makes a contribution to the world.
But at the same time such work often runs the risk of not being really “human.” Once persons are abused as “things” and money is worshipped as a divinity, the human dignity of workers is wounded. Since we are living in the midst of such a world, must stand up and pray together to restore human dignity in unison with other companion workers.