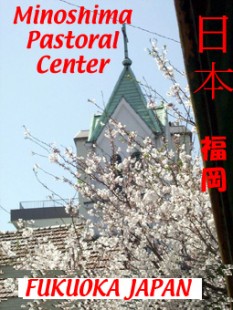 Right after the Pacific War, Minoshima, located in the Hakata area of Fukuoka, was a very poor zone. Many people returning from the War, along with foreigners and outcasts from society, were living there. After an embankment was built to protect the site from flooding by the Naka River, more Japanese also began living there. In 1952 priests of the Paris Foreign Mission Society (MEP) built a wooden chapel and house there. That became the Minoshima parish. Later a Catholic kindergarten was built nearby.

Eventually the structuring of the parishes changed. The Minoshima parish was annexed to the Ogusu parish, which could not attend to the pastoral needs of Spanish-speaking foreigners. So in 1994 the Minoshima church building became the new Minoshima Pastoral Center, with Fr. Kauss Marcel MEP as Director and Fr. Angel Setoain SJ (who died in 2003) assisting the Spanish-speaking people there for many years.

Since 2007 I have been cooperating at the center. Sunday morning Masses are conducted in Spanish for Peruvian Catholics. I preach in Spanish and Japanese because the children of the migrants can only speak Japanese. Migrant workers of other nationalities, like Chinese, Vietnamese, Nigerians, and people from Cameroon and Tanzania, also attend Mass in the center.

Usually after Mass we spend time drinking tea and eating lunch together. People come to consult about their problems and provide food of Japanese and foreign cuisine. We also prepare the children for Baptism, first Communion and Confirmation.

In the Pastoral Center we have a Drug Addiction Rehabilitation Center (DARC) section, where 14 male adults living in the residence conduct rehabilitation sessions. The center serves as the head office of Kyushu DARC and has branch offices in Saga, Nagasaki, Kumamoto, Oita, Miyazaki, and Kagoshima. Twice a year, during their General Assembly and at Christmas, nearly 200 people belonging to their organization congregate there.

I also perform weddings, baptisms and funeral services (sad to say, there are many suicides). A great number of foreign workers and DARC members eagerly participate in these events.

Additionally, I also attend meetings of homeless people, but since many of them are quite reserved it is not easy to converse with them.

We have many collaborators in the Center and, more than Catholics, Protestants form the majority. We also have Buddhist collaborators. In this way we are also building an excellent relationship of religious dialogue.