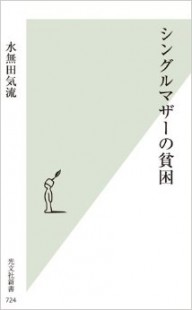 According to the Health, Labor and Welfare Ministry’s Comprehensive Survey of Living Conditions, a worst-ever record 16.3% of children were living in households with income lower than half the average as of 2012. One in six children are now living in dire poverty. Last August the Cabinet approved an “Outline of Child Poverty Countermeasures” and has started to work on related laws.

Child poverty is not readily noticeable within the enclosed family environment. Furthermore, in the background there lurks the poverty of women, especially women in fatherless families. The relative poverty rate among Japanese single- parent households is as high as 54.6%—highest among the 20 developed countries (2012). Many children brought up in single-parent households are forced to live in poverty, so the vicious cycle of child poverty is a matter of deep concern.

Ms. Minashita interviews six single mothers and, analyzing their lives, finds them financially unstable, pressed for time, and burdened by the added context of divorce or unmarried status. She depicts the difficulties and sufferings of low- income fatherless families as one culmination of Japan’s social problems “across the three areas of work, family and social security system” (p. 3).

Contrary to the declining birth rate, “the number of children brought up by single mothers has been steadily increasing” (p. 28). An additional factor behind this is that the number of divorces has increased. Moreover, the wages of women are very low compared with those of men. Though it is true that old cultural norms imposed on the home-dwelling housewife no longer apply in Japan, a ruthless theory of self-responsibility prejudicial toward women who have divorced for the sake of their children is still dominant in our society.

Mothers and children are becoming more deeply isolated in society. Their poverty becomes apparent when they are put in escapable situations such as hospitalization from overwork. “It is obvious that the choice to live as a single mother leads directly to poverty” (p. 199). The author thinks that “for the sake of personal well-being, we should eliminate old family norms with the related evil customs and find a more flexible structure for the family” (p. 255). However, it is questionable whether insuring safeguards for the unmarried and those desiring extramarital birth can really help solve the declining birthrate.

Divorced single mothers pose a delicate issue for Christians, because they are aware of both the grace that accompanies marriage and the obligation of indissolubility, and they realize that human dignity is nurtured and protected within a married family life. If Christians will understand the toil of a single-mother household without judging or criticizing, they will certainly also find Mary and Jesus present there. Even while believing in the significance of family and marriage, we must have an open mind toward the victims of a poverty that is not readily noticeable.