Foreign workers in Japan hit record 717,504
The number of foreign workers in Japan stood at 717,504 at the end of last October, up 5.1 percent from a year before according to the Health, Labor and Welfare Ministry. The figure was the highest since it became mandatory for employers to submit reports on foreign employees to the ministry in 2007. The increase reflected an improvement in the employment situation amid the economic recovery and Japanese companies’ growing moves to hire foreigners with special skills, according to the ministry.
Of all foreign workers, 27.3 percent were in Tokyo, followed by 10.9 percent in Aichi Prefecture, 5.9 percent in Kanagawa Prefecture, 5.3 percent in Osaka Prefecture and 5.2 percent in Shizuoka Prefecture.

Japan may boost immigrant numbers
While stressing that no decision has been made, Chief Cabinet Secretary Yoshihide Suga on Friday (March 14, 2014) did not deny a media report that the administration is considering increasing the number of immigrants to boost Japan’s potential for long-term economic growth.
As he pointed out, during the Feb. 24 session of a subcommittee of the Council on Economic and Fiscal Policy—a key advisory body for Prime Minister Shinzo Abe—the administration revealed an estimate that Japan will be able to maintain a population of more than 100 million if it accepts 200,000 immigrants a year, and the total fertility rate, a key indicator of a country’s birth trends, recovers to 2.07 by 2030 from the current 1.39.
Whether to accept huge numbers of immigrants to maintain Japan’s economic potential has long been a politically sensitive issue. Many conservative lawmakers in the ruling Liberal Democratic Party are opposed to such ideas.

Nursing care worker shortage
According to a fiscal 2013 survey by the Care Work Foundation, more than 20 percent of nursing care facilities, suffer from shortage of workers. The shortage is particularly serious in urban areas.
The Health, Labor and Welfare Ministry estimates that there were 1.49 million nursing care workers in fiscal 2012. But it forecasts that in fiscal 2025, the nation has to secure an additional 880,000 to 1 million such workers. It should be noted that only slightly more than 60 percent of the 1,086,000 registered certified care workers are actually working.

The situation of foreign Workers “technical intern training”
The foreign technical intern training program started in 1993, ostensibly as part of Japan’s “international contribution” to increasing skills and know-how in developing countries.
There are two ways to enter the program. One is to get hired directly by a branch of a major Japanese company. The other route is to get recruited by a “supervising organization,” such as a chamber of commerce, small business association or cooperative, associated to Japan International Training Cooperation Organization (JITCO), to intern at a small or midsize business. Most trainees enter via this latter method.
An estimated 142,000 foreign trainees were enrolled in the program at the end of 2011, with 107,000 from China alone. The others hailed from Vietnam, Indonesia, the Philippines and Myanmar. At the peak, around 2008, there were about 200,000 trainees in Japan.
The trainees are sent via 760 “sending organizations” approved by their home countries and dispatched through the supervising organizations to the employers. 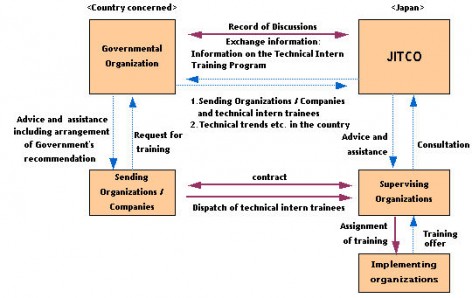 Problems that have been associated with the program
Although the purported objective of the trainee system is to help developing countries, experts say that in reality, it is being used to pool cheap, unskilled labor for Japanese companies.
Other alleged mistreatment includes employers seizing the interns’ passports and bank cards, and holding onto some of their pay as “savings” to prevent them from running away.
Justice Ministry data meanwhile indicate that the mistreatment of apprentices has been rising in the past couple of years despite the legal revisions.
In 2012, 197 organizations and companies were found engaged in “unfair practices,” up 20.9 percent from the 163 cited in 2010.
The mistreatment mainly took the form of unpaid wages and labor law violations. Some apprentices, for example, were forced to work more than 100 hours per month of overtime. Any company caught, however, only faces a maximum five-year ban on using foreign trainees.
Jorge Bustamante, U.N. special rapporteur on the human rights of migrants came to Japan on March 23, 2010, for an official inspection. Bustamante held a press conference on March 31, 2010 and outspokenly urged the Japanese government to terminate its program for overseas industrial trainees and technical interns, saying it might amount to “slavery” in some cases, fueling demand for exploitative cheap labor in violation of human rights. He proposed replacing the program with one of employment.

Working conditions and treatment of foreign workers in Japan
The situation of foreign works in Japan is greatly shaped by labor contracts and the customary brokerage system, structural frames that usually victimize foreign workers. The lack of knowledge of the Japanese situation and the language are often high obstacles that play against people from abroad coming to work in Japan.
Japanese labor leader, Torii Ippei, Secretary General of All Labor Trade Unions manifested publicly that “Foreign workers in Japan faced general labor problems, like unpaid wages, labor accidents, layoffs, etc. And, on top of that, in many instances their passports are taken away and they are forced to live under very bad conditions”.

Women migrant workers in Japan
The sex industry likes foreign workers for the same reason every other industry likes them: they’re cheaper and willing to do jobs few others are, says Takashi Kadokura, an economist with Dai Ichi Life Research Institute, who recently set the size of Japan’s “entertainment trade” at a staggering 2.37 trillion yen (2001).
Among the many groups of female workers, a large proportion of Filipino workers in Japan are young women. Back in 2005 about 37,235 young Filipinas received contracts to work in Japan. It is important to notice that there is no legal category for “domestic helpers” to work with Japanese families. According to the EPA economic agreement signed in September 2006, Japan agreed to accept large numbers of Filipina nurses and care givers. At present Vietnam and Indonesia are also included in the same EPA economic agreement.
“International marriages” where the foreign side is the wife are becoming customary in Japan. Often they do not last, and, in many cases, the main motivation is to obtain legal status. The difference in age is usually of 10 or 20 years; the Japanese side being much older. The children of migrant workers, although receiving compulsory education up to High School, have often to go through many traumas at home and are much more bullied at school than the ordinary Japanese child.
According to the mass media, the image ordinary Japanese people have of foreign workers is not very friendly. It is difficult to probe this objectively, since Japanese media does not report so often on the situation of foreign workers and does not take their side. On the other hand, the Japan Times that leads foreign media in Japan is an exception. It usually covers the issues of foreign workers with a critical attitude towards the authorities.
In Japan, the Catholic Church already has long experience in this field. The Church has been involved in many ways with foreign workers in the fields of welfare, legal, pastoral and educational. In fact, maybe even more than half of our Catholic population in the country consists of foreign workers coming from Brazil, Peru and other Latin American countries, as well as from the Philippines.

Private Educational Pilot Project for foreign workers
At the national level, Japan is doing less than enough to provide Japanese education to hundreds of thousands of foreigners working and living in Japan. It clearly shows the lack of a “migrant policy”. Certainly foreign workers and their children here are at a loss. The abundant Japanese private language schools are all very expensive for the economic possibilities of foreign workers’ families.
The Adachi International Academy -AIA- is a private Pilot Educational non-profit Project oriented to provide basic educational tools to children (6-15 years old) born to foreign parents, mostly migrant workers representing 15 nationalities, that live in the Adachi region, the outskirts of Tokyo.
AIA also assists adult migrant workers to get knowledge about the Japanese system, language and culture. The stress is on a person-to-person approach. The education is practically free to allow even the most needy workers’ families to get the basic tools to obtain solid compulsory public education and for adults to get better jobs.
AIA is run by experienced teachers and youth volunteers. In 2008, four Catholic religious congregations specialized in youth education decided to work together in this pilot project. If you visit AIA you might find a Filipina mother learning Japanese characters and her little baby next to her sleeping in a baby sitter while a volunteer teaches the mother Japanese, or maybe a father from Ghana learning how to read and write Japanese with three more adults of other nationalities late on Sunday morning. His three children will come in the afternoon for Japanese lessons, Mathematics or English. There are no lessons done with white or blackboards in classrooms. The stress is on a person-to-person approach, an education oriented to developing personalities, to making learning interesting, and to building a familiar atmosphere of trust in both adults and children. Quoting from the thinking of Brazilian psychologist educator, Paulo Freire, students become teachers and teachers learn also from their students. Children attending AIA talk freely and loudly in Japanese, with all kinds of strange accents, but these same children sit down passively for hours in the classrooms of public schools, obliged to attend compulsory education, without understanding their teachers.
An important side-effect of this pilot educational program is the involvement of young and senior volunteers. AIA offers people a place for human fulfillment and the possibilities to do something meaningful to others.
Without official support, all AIA expenses (rent, transportation costs of volunteers, scholarships for high school students in need, etc.) are met by supporting groups and donors. 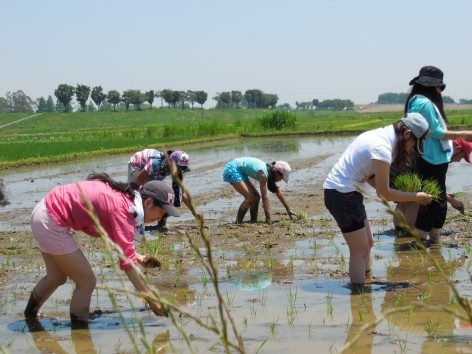 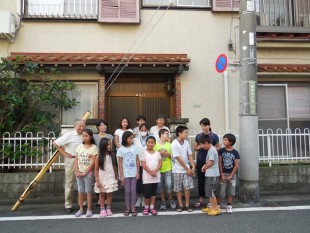 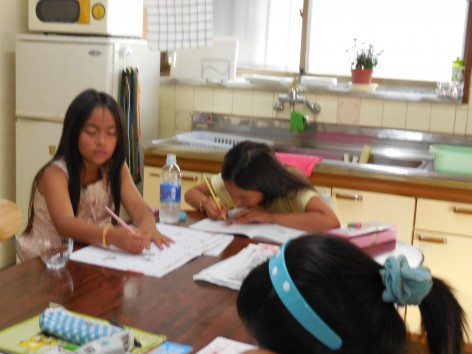