Frankfurt Religious Conference for the Abolition of Nuclear Power

An International Conference was held March 3-6, 2015, in the outskirts of Frankfurt, Germany under the sponsorship of the local Hessen Nassau Protestant Church. The theme of the Conference was “The ‘Energy Shift’ from Nuclear Power to Sustainable Forms of Energy—What can Religious Groups Contribute to Climate Protection?” Since the situation following on the Fukushima nuclear disaster was to be taken up, there were many participants from Japan’s Protestant churches and Buddhist groups.
Officials of organizations taking critical attitudes toward the promotion of nuclear energy, such as International Physicians for the Prevention of Nuclear War (IPPNW) and Physicians for Social Responsibility (PSR), Nobel Peace Prize receivers, were also represented. Delegates from the World Council of Churches (WCC), European Christian Environmental Network (ECEN), and Christian organizations from East Asia eager for the abolition of nuclear energy, like representatives of Korean Protestant churches, gathered for lively discussions. I represented the Japanese Catholic Church and reported the situation of the Catholic Church and our Jesuit involvement with regard to the abolition of nuclear energy and other environmental issues pertaining to “reconciliation,” as urged by the 35th General Congregation of the Society of Jesus. 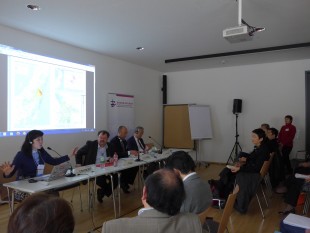 The Conference started with an exposition by J. Frerichs, who is responsible for peace education and disarmament at the WCC. He explained briefly the statement produced at the WCC’s Pusan (Korea) meeting in July 2014 with regard to “A Nuclear-Free World.” European Christian churches also reported their views on nuclear energy.
Japanese Buddhists pointed out three evils that humans must surmount—Greed, Anger, and Ignorance—which, according to their belief, cause the world to be dominated by development, rights, wars, nuclear energy, and nuclear armament. Europeans also agreed. Korean religious Sisters led by Sr. Kim Young-hee RSCJ, representatives of the Anti-Nuclear pro-Natural Energy Committee of the Conference of Major Superiors of Religious Women of Korea, reported on a statement published by Korean Christians. This statement also urges Japan to cooperate with them as a neighboring country.
The report delivered by Mycle Schneider, consultant on International Energy nuclear policies, who visits various parts of the world, was especially noteworthy. In 1997 Mr. Schneider, together with Japanese antinuclear thinker Takagi Jinzaburo, was a recipient of the Right Livelihood Award, an award similar to the Nobel Prize in the fields of Human Rights, Environment, and Peace. In his report he made us of elaborate data to show that the possibilities of energy recycling already surpass the usefulness of nuclear energy. He was able to make an effective impression when invited to Seoul, but in spite of the many times he visited Japan, he felt totally frustrated at seeing no visible results.
Finally, on the last day we moved to Frankfurt City for a public session on nuclear energy in connection with the development of nuclear arms. The discussions centered on denouncing the astonishing lies and deception of Japanese political leaders and their tendencies toward secrecy. I realized that people in other parts of the world are well aware of Japan’s shadow realities. 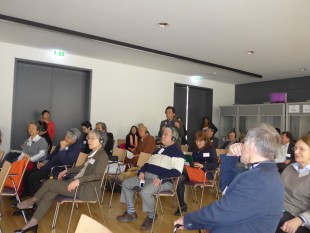 Since the time of Paul VI, as a result of the tendency of human society to profit from indiscriminate use of natural resources, Catholics who are aware of this situation and cooperate with many others have stressed the ecological stand that we should be aware of our responsibility toward humankind. Recently, people have also come to realize that ecological crises are closely related to poverty and to issues of justice and peace.
Nevertheless, up until 2011, the Vatican did not show any negative signs regarding nuclear energy. Notwithstanding the basic antinuclear stand of the Italian government, Vatican spokesman Cardinal Renato Martino expressed publicly in the summer of 2007 that nuclear energy should be welcomed as one form of available “clean energy.”
In other words, the opinion was that establishing safe regulations with regard to humans and the environment, as well as forbidding the production of nuclear weapons, did not raise problems regarding the use of nuclear energy for peaceful purposes. Again, on August 28, 2008, Pope Benedict XVI asked the International Atomic Energy Agency (IAEA) on the occasion of its 50th anniversary to look for an “agreement to gradually abolish nuclear arms” and for a “reliable peaceful use of nuclear energy to promote true development.”
The Vatican’s positive stand with regard to the use of nuclear energy continued unchanged in 2010. In fact, in September 2010, Ettore Balestrero, special Vatican delegate to the IAEA General Assembly, expressed the Vatican’s approval of having countries make use of reliable and safe nuclear energy for peace and human development. The motivation for that stand was that, if each country makes use of nuclear energy as far as needed, this will help the fight against poverty and disease and will consequently contribute to solving the serious peace issues that humankind is facing.
However, after the Great East Japan Earthquake and Tsunami on March 11, 2011, followed by the nuclear disaster at Fukushima, the Bishops’ Conference of Japan published a public message “Abolish Nuclear Plants Immediately” which challenged the Vatican’s view on the use of nuclear energy. In June 2011, Pope Benedict XVI insisted that “the role of politicians is to develop energies that are not dangerous to humankind” and urged for a change to natural type energies.
The Catholic Church of Japan is preparing a Japanese translation and publication of the public statement by the Bishops’ Conference of Korea with regard to nuclear plants: “Reflections of the Catholic Church of Korea in relation to Church teaching and nuclear technology and nuclear plants.” Again, the Japanese Bishops are preparing their own statement following on the “Abolish Nuclear Plants Immediately” public message they published in November 2011. Efforts are under way to establish within the Catholic Church a special network, the subcommittee of the “De-Atom for Peace” which will visibly gather promoters of anti-nuclear plants.
Oshidori Mako&Ken, comedians who at the same time work as journalists concerning nuclear plants and victims of the Fukushima nuclear disaster living in Iitate village reported on the situation of Fukushima at the Frankfurt Conference. Their letters were delivered to Bishop Katsuya Taiji by arrangement of the Japan Catholic Council for Justice and Peace before the Japanese bishops’ ad limina visit in March this year. Bishop Katsuya arranged to have these letters delivered to Pope Francis and during his conversation with the Pope spoke freely with him for a while on the nuclear disaster of Fukushima and the Great Earthquake of 2011. The Pope compared nuclear plants to the tower of Babel, as an instance of modern cultural distortion, saying that “by trying to build a tower to reach heaven, humans are inviting their own destruction.” The Pope is preparing to publish an encyclical this summer on Ecology. Let’s hope he touches also there on the problems of nuclear energy. 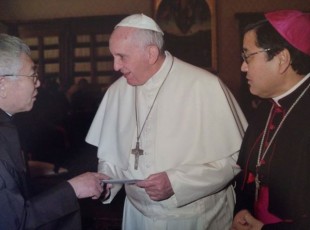