As long as there nations there will be migrants.

Beginnings of the Movement of Foreign Workers to Japan
Migration in Japan cannot be described apart from the military annexation of Korea by Japan. Beginning in 1910, the dominant presence of Japan on the Korean Peninsula greatly increased. There were fewer than 1,000 Koreans in Japan in 1910 but their numbers increased to about 400,000 by the year 1930, and at the end of the Pacific War (1945) reached 2 million. Their hard life and work conditions, educational opportunities, and social treatment provide insights into the situation of today’s foreign workers in Japan.
As a result of the outbreak of the Korean War in 1951, many Koreans in Japan, unable to move to Korea, had to remain unwillingly in Japan. They lost their Japanese nationality and were left in situations of hardship. Taiwanese living in Japan at that time also faced similar problems.

The arrival of foreign workers to Japan after 1950
Workers from several Asian countries entered Japan in big numbers from the 1960s. They were young people with dreams of getting new and better lives. Most of them wanted to bring their families out of poverty and pay for the education of their brothers and sisters, to provide a better future at home, and to help their parents build better human households. Those young workers came to Japan with high hopes and content to be able to assist their dear ones. They could not do so in their own countries because there were no jobs available. Foreign workers had the courage to start an unknown difficult life in a country where they did not know the language, a country quite different from their own. It was a risky adventure, but Japan was rich with many possibilities of good remunerative jobs. They were happy and lucky because they were able to make it to Japan.
Many of those Asian workers coming to Japan in the 60s and 70s were young women from Taiwan, Thailand, and the Philippines. They were entertainers, or employed in the service field, etc. The way Japan’s gangster groups worked to attract young Asian girls to Japan created many social problems at the time.
Much as some might wish it otherwise, migration is a fact of life. So it is not a question of stopping migration but of managing it better and with more cooperation and understanding on all sides. Far from being a zero-sum game, migration can be made to yield benefits for all.
In Japan, Kyodo News reports that, according to a survey made by the Tokyo Council of Social Welfare, 30% of Tokyo’s 316 elderly care facilities, in which the majority (90%) of workers are women, employed a total of 196 foreign workers. Filipinas account for more than half of these foreign caregivers, followed by Chinese, Taiwanese, and South Koreans.
Speaking from experience, refugees and migrant workers often tell me that they cannot go back to their country of origin because of official repression and persecution. Their lives are in danger, as well as their families. Most migrant workers invoke the lack of jobs back home and the poverty awaiting them there without no possible income to survive decently. Public authorities in Japan turn deaf ears to such pleas. In fact, although we use the expression “migrants” in Japan, there is no concept here of an “immigrant.” Officially, there is no immigration policy like those in many other countries but rather only a control policy for dealing with “aliens.”

The Shaping of Japan’s Immigration Policy
Nevertheless, times have changed, maybe drastically, for Japan. The country is a forerunner in globalization. Up to now, Japan has opted for rigid restriction of foreign workers coming into the country. But business and Japanese multinationals experience the need to open doors to workers from outside in order to be able to compete and expand their activities. I believe that Japan’s official stance on the issue of migrant workers is different from the policies of Japanese businesses. That became clear around the year 2007, when the country officially opened the door to “Nikkeijin” with former roots in Japan from Latin American countries. Business pushed strongly for changes in immigration policies.
In fact, there are two main new phenomena obliging Japanese authorities to make some substantial changes in their perceptions with regard to the acceptance of foreign workers.
The first is the preparation for the 2020 Tokyo Olympics. In the past, exactly 50 years ago on the occasion of the 1964 Tokyo Olympics, the country observed a substantial economic-industrial recovery. The building of high-speed highways and the beginning of the Shinkansen Railways became symbols of strong economic development. Now, with the coming of the new 2020 Tokyo Olympics, people recall those “good old days” and expect a new strong economic recovery. Nevertheless, Japan does not have the workers needed to produce an economic “miracle” again. So even Prime Minister Abe has officially stated that Japan will accept 200,000 foreign workers annually.
The second phenomenon is even more realistic and urgent. Japan’s population is increasingly shrinking and the country is in need of a young labor force, which is impossible to find nowadays. Japan has decided to retain and augment its industrial powers and needs workers from outside to do that.
The projected decrease in Japan’s population has forced the country to think more positively about accepting foreign labor and improving the whole immigration system.

New Immigration Law (2012)
The Japan Immigration Law has been revised several times. In 1989, during the economic bubble period, as a result of the revision of the law, Nikkeijin mainly from Latin America were easily permitted to come to Japan to work. Around 400,000 Nikkeijin from Brazil and Peru were living and working in Japan by 2007. The new revision of the law in 2009 gave the Home Ministry absolute control over foreigners in the country. The alien registration card all foreigners had to have in the past was changed into a “residence card” with an IC chip, where all personal data, including residence address, visa status, etc. was included. Foreigners are obliged always to have it with them, with a penalty up to 200,000 yen if a person is found without it. Employers are also obliged to report in detail about the workers they employ, their domiciles, visa status, employment conditions, etc.
City halls (numbering 1,787) spread all over the country were formerly the offices in charge of officially handling many formalities in areas where foreigners were living, but they are not allowed to do so any more. Instead, immigration offices limited in number (76) do everything regarding foreigners. Those not reporting immediately on changes of address, marriage issues like divorce, changes of jobs, etc. are subject to penalties. In other words, Immigration enjoys total control now.
Immigration authorities estimate that in 2011 there were between 90,000 and 100,000 undocumented migrants in Japan, including 78,488 over-stayers. The number of over-stayers has been halved in the last five years. Most came from Asian countries: South Korea (19,271), China (10,337), Philippines (9,329), Taiwan (4,774), and Thailand (4,264).
Undocumented foreigners, if caught by police or by immigration officers, are taken into detention centers that are real jails.
Japan has three main immigration detention centers, in Ushiku (Ibaraki prefecture), Ibaraki (Osaka prefecture), and Omura (Nagasaki prefecture), plus other big temporary centers like the one in Shinagawa (Tokyo), where hundreds of foreigners are detained. Immigration has 8 regional bureaus, 7 district immigration offices, and 61 branch offices. As of 2012, all regional bureaus, district immigration offices, and 1 branch office had detention facilities.
Lengthy detentions are also a major problem, as the book Kabe no Namida (Wall of Tears) points out, because even after deportation orders are issued for Immigration Law violators, these violators can continue to be held for an indefinite time.
According to an investigation by Kyodo News, 23 detainees at the centers attempted suicide between 2000 and 2004. 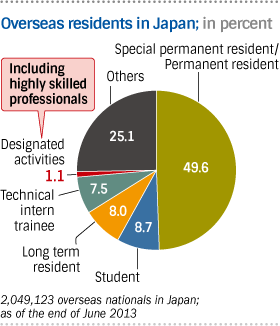