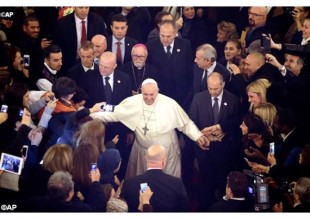 Dec. 1 (Vatican Radio) – Pope Francis, with the Ecumenical Patriarch Bartholomew I, signed a joint declaration pledging to intensify their search for Christian unity and calling for a constructive dialogue with Islam during his 3-day pastoral visit in Turkey. At the end of this visit, the Pope met with a group of around 50 young people that included many refugees from Syria, Iraq and other countries of the Middle East and Africa. The youths are being cared for by the local Salesian community in Istanbul. In his address, the pope assured the young people that he shares their sufferings and deplored the degrading conditions in which so many refugees are forced to live, calling it “intolerable.”

INDONESIA – Archbishop of Semarang: “Serve the common good, beyond religious belief”
Nov. 28 (Agenzia Fides) – Following the decision of the Indonesian president Joko Widodo to appoint the Christian Protestant Ahok as governor of Jakarta, Archbishop Pujasumarta of Semarang [Indonesia] said, “[the one] who holds political and institutional office is called to serve the people and to promote the common good, beyond his personal religious beliefs or ethnicity. And citizens have to choose leaders for their skills, expertise, professionalism, not for religion” Ahok, 48, the first Indonesian ethnic Chinese to hold the post, will rule Jakarta until 2017. Some Islamic extremist groups have criticized Ahok, calling him an “enemy of Islam”, whereas many Muslim leaders have supported his appoinment, acknowledging his “honesty, discipline, transparency.” Archbishop Pujasumarta has urged Catholics to pray for Ahok. 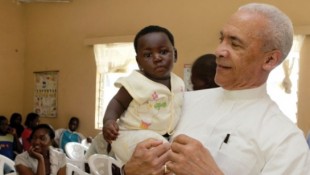 Nov. 25 (CNS) – The scenes of chaos and violence in Ferguson, Missouri, Nov. 24 following the grand jury’s decision not to indict the white police officer in the shooting death of Michael Brown, an African-American teenager, reveal deeper issues going on in the country, said one of the country’s black Catholic bishops. “The racial divide that exists between blacks and whites is not addressed adequately except when tragedies such as this happen,” said retired Bishop John. H. Ricard of Pensacola-Tallahassee, Florida, who is president of the National Black Catholic Congress. He also said it “raises questions on both sides on the use of violence and police reaction,” adding that in this country there seems to be a “consistent pattern of excessive force used against African-American men.”

Democratic Republic CONGO –Violence and abuses committed against women and children
Nov. 20 (Jesuit Refugee Service) – Twenty-five years after the UN adopted the Convention on the Rights of the Child in 1990, widespread abuses committed against children by armed forces and armed groups is still remaining concerned. Although significant progress has been made to protect children from armed conflict in the DRC, there is still a long way to go to prevent the recruitment of children, improve assistance to former child soldiers, and end impunity. 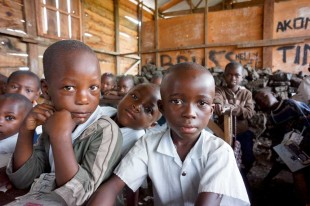 Nov. 25 (Agenzia Fides) Kinshasa – In a message for the World Day for the Elimination of Violence on women on Nov. 25, the Bishops of the DRC say, “Our Country …will first have to support women and accompany them in their struggle for the establishment of a society where their rights are not only recognized but actually implemented.” Sister Teresina Caffi (Xaverian) has already explained in 2010 to Fides: “Women are a target of a war that has dragged on for 20 years in eastern DRC. … We are not talking about a single soldier who because of his most brutal instincts, rapes a young woman, but of a systematic use of sexual violence to destroy people psychologically.”