Results of Economic globalization
Recently we often hear the word “globalization” used in a favorable sense. In 2014 Sophia University inaugurated a Faculty of Global Studies and a great number of students enrolled, attracted by the name and feeling globalization to be desirable.
Of course, it is true that there are many positive aspects of “globalization.” But it is questionable whether we can fully approve of globalization. In other words, will humanity develop more fully thereby so that all people can live happier lives? In this report I would like to think about this question especially from the angle of economic globalization.
This article is based on the 9th lecture of “The Second Vatican Council, Before and After” seminar series sponsored by our Center, in which Fr Masatsugu Shimokawa, SJ (Professor of the Sophia University Faculty of Global Studies) spoke on October 15, 2014, on “Structural sin and actual international economic political structures—The results of economic globalization?”

The present condition of the world poverty
Let’s begin from some surprising data. (The data of this chapter is taken from the World Bank on PovcalNet. No data is available for some areas.) 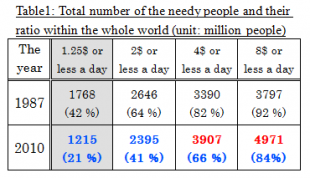 About 40% of all people are now living on an income of less than 2 dollars a day. Furthermore, half of these, that is, approximately 20% of the total, live on an income of less than 1.25 dollars a day. Thus, about one out of five people live in a state of “extreme poverty.”
However, some insist that, in fact, the numerical value of this ratio has considerably “improved” by economic globalization. In fact, according to data from 1987, the ratio of people living on 1.25 dollars or less a day was approximately 42% of the total population, and so it may be said that, since the ratio of people in extreme poverty in 2010 was 21%, the 1987 ratio was surely “reduced to half.” The United Nations’ Millennium Development Goals aimed at “decreasing the ratio of extremely needy people to half.” This aim seemed to have been achieved when we simply look at the numerical data.
However, there is a certain trick hidden in this numerical data. The numbers seem to show a reduction of the ratio by one half but, in fact, the extremely needy who totaled approximately 1,800 million in 1987 totaled approximately 1,200 million people in 2010 because the world population itself had increased explosively. So even if the ratio seemed to decrease dramatically, the real number of people suffering from extreme poverty and starvation throughout the world is still more than 1 billion. 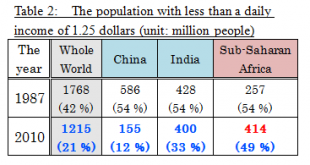 Income disparities continue to expand
From what we have seen about globalization so far, it is certainly not possible to say that it has solved the problem of world poverty. On the contrary, as we shall now see, it may actually have increased the disparity of income around the world.
Let’s start again with some surprising data. Of the whole world population, the wealthiest one-fifth of humanity owns 83% of all the earth’s wealth, while on the contrary the poorest one-fifth of humanity owns no more than a mere 1% of the earth’s wealth. The special feature of the graph has given it the name “wine (or champagne) glass of wealth.”
According to the data of 1960, the average income of the lowest 20% of the population, when compared with that of the wealthiest 20%, was at a ratio of 1 to 30. However, according to the data of 2007, the ratio had expanded to 1 to 83. In other words, the economic disparity between the rich and the poor had more than doubled. 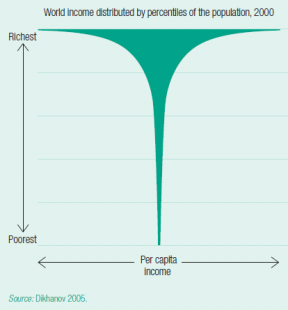 An index called the Gini coefficient is used to show the disparity of income distribution. According to the Gini coefficient, the minimum is set at “0” and the maximum is “1.” The minimum of “0” represents the situation in which all people have acquired the same equal amount of wealth, and “1” represents the situation in which one person monopolizes all the wealth. The global Gini coefficient is approximately “0.8,” which bespeaks a strong social malaise in which some violent outburst may occur at any moment.
In his Apostolic Exhortation Evangelii Gaudium (2013), Pope Francis pointed out that such disparity can cause a violent reaction and that, unless the injustices of exclusion and disparity are removed from society and the economic system, violence cannot be extirpated (no.59). What economic globalization has brought about in today’s world has not contributed to the development of humanity’s happiness but has rather fostered the increase of unjust exclusion and disparity, which give rise to violence.

Structural sin and its conquest
Pope Francis urged clearly again in Evangelii Gaudium that “we also have to say ‘thou shalt not’ to an economy of exclusion and inequality” (no.53). As for exclusion, he said, “How can it be that it is not a news item when an elderly homeless person dies of exposure, but it is news when the stock market loses two points?” As for inequality, “Can we continue to stand by when food is thrown away while people are starving?” The notion of “structural sin” is clearly shown in this claim of the Pope.
The notion of “structural sin” was born in the context of liberation theology, which arose mainly in Latin America in the 1970s. It was first referred to in the social doctrine of the Church in 1987 in Pope John Paul II’s Encyclical Letter Solliticitudo Rei Socialis (On True Development). Structural sin is a sinful structure within the political and economic systems of the society in which we live.
Structural sin can also be seen as our original sin. It is that inclination we all have arising from our ties to sin and our egoism. Even if we try to live without sinning, we can commit sins in our ordinary life that are difficult to avoid, almost without realizing it. For example, when doing our usual shopping in a supermarket, the products we buy may have been produced through unjust exploitation of labor.
In the encyclical of 1987, the economic disparity among nations, which was referred to as the North-South problem, was called structural sin. The economic exploitation of developing countries by advanced countries was at issue then. International politics, too, are controlled by advanced countries.
Evangelii Gaudium of 2013 is aware of these problems but goes on to say that they come from placing too much absolute trust in the mechanism of the market, minimizing the function of government and leaving everything to the marketing principle, as if to give the greatest importance to market supremacy.
The 18th-century economist Adam Smith used the expression “invisible hand” to explain the basic principle of market economy. The theory is that “even if individuals act as they please in the market, and precisely because they do so act, the socially desirable situation is attained.”
This basic principle now reappears in the market economy in the form of neo-liberal globalization. However, the problem is that “the socially desirable situation” is simply “efficiency” and anything beyond that, namely the reality of people suffering from poverty, starvation, exclusion, and inequality, is simply ignored.
In former days, the weak were society’s oppressed and exploited. However, now that efficiency is overemphasized in economic globalization, the poor are no longer the object of exploitation. They have rather been relegated to the level of the ignored and excluded ones. Is this great problem accompanying economic globalization not a “structural sin” that has gotten out of humanity’s control?

Hopefully, readers of this bulletin are interested to some extent in the problem of poverty. As such they certainly do not accept what Pope Francis calls “heartless globalization.” Some may actually be zealously pursuing economic relief and educational help for the poor.
Nevertheless, despite such efforts of ours, problems of poverty and exclusion continue to arise in contemporary society. There are still not enough people who understand correctly the unjust structures of society and try to remedy them.
Action against structural sin does not at all demand some form of socialistic revolution. Above all, we need to begin from an understanding that “structural sin is rooted in the sin of the individual” (cf. Sollicitudo Rei Socialis, no.36).
In order to conquer structural sin, individual conversion and conversion of the culture so as to foster individual conversion are required. And this “culture” must truly become a culture of “solidarity” (nos.38-40). It is precisely solidarity that offers the greatest weapon for conquering structural sin in ways that the individual left alone cannot (cf. Evangelii gaudium, no.189).