The 38th Japan Catholic Justice and Peace national rally was held in Fukuoka from September 13 to 15 with the theme “To a society that values life –observe, listen, know, do–” Participants attended various programs for 3 days. Here I will report on the main features of the rally, which attracted some 2000 participants.

On the first day Most Reverend Peter Kang Woo-il, Bishop of Jeju Diocese in South Korea, delivered the keynote address. Bishop Kang began by mentioning the incident of the Sewol ferry disaster and the recent official visit to South Korea by Pope Francis. Both events pointed clearly, he said, to issues confronting South Korea today. He next stressed that, due to long years of State oppression of Jeju islanders and more recently with the building of a naval military base on the island, the disquieting look of the island residents thus affected has caused him deep distress. He said that, despite the many worries and criticism he received at the beginning, he decided not to ignore the voices of these powerless islanders and committed his diocese to opposing the building of the naval base. 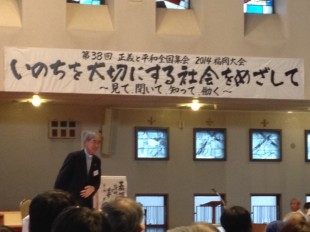 Bishop Kang’s speech dealt with the human person and the dark sides of Korean history. I was especially impressed by the March 3 Incident, the assassination of Jeju islanders, and the massacres perpetrated by the Korean army during the Vietnam War. The State should first of all defend the lives of its people, but looking back at history, the opposite is true. Many human lives are trampled upon by various States. Bishop Kang also said that we should liberate countries from the myth that they possess some absolute value. One prophetic role of Christianity is to fix people’s eyes on the supreme values that transcend the State.
After the keynote address, high school students “peace ambassadors” spoke. Aware that they are the last living generation to hear directly about the war experiences of hibakusha and other victims, they made peace appeals against the cruelty of war. There I had the opportunity of hearing high school students extending their appeal for the importance of peace to as many people as possible, especially to Japanese youth and to all people on earth. I was encouraged by the presence of such young people.

The second day we had Sunday Mass followed by a talk from Divine Word Fr Michael Siegel. That day was spent in group discussions, field trips, and network meeting. In his sermon and during his talk afterwards, Fr Siegel spoke about activities for social justice in the Catholic Church.
From Old Testament times the issue of justice with regard to the poor, widows, orphans, displaced persons, and other powerless people has been preached. The early Christian communities, too, always had special concern for the little ones, to the extent that “none of their members was ever in want” (Acts 4:34). The basis of Catholic social teaching rests on three main pillars: “The dignity of the human person (life),” “Respect for the independent subject,” and “Solidarity.” The Japanese word for justice (seigi) contains an image of norms forced from above, while the English word “justice” means “just fit.” In other words, the original meaning is to live human life according to the will of God. This was the content of Fr Siegel’s speech.
Fr Siegel, who was among those who nominated Article 9 of the Japanese Constitution for the Nobel Peace Prize, spoke about war and peace. The armaments race resembles alcohol addiction in that it takes over without limits. He explained that deterrence involves a continuous atmosphere of fear and is not the way to obtain peace. Rather, what is needed is compromising settlements through negotiations based on mutual trust.
Over 10 discussion groups and field trips were organized for the conference. I participated in the “Christian worker” group. A group led by youth from Nishijin Church in Fukuoka presented a play simulating the worries of today’s young workers. Again, after a report on the results of a survey on the awareness of Christians according to various generations, participants divided into small groups and shared opinions on the topic of “work.”
Groups concerned with capital punishment and Japan’s Constitution gathered late in the evening for networking. This time I attended the group concerned with “getting rid of nuclear energy for peace purposes.” I felt again the importance of linking communal efforts to build a real world without nuclear plants and nuclear weapons.

On the third day the Rally closed with a symposium entitled “A society that values life.” It was chaired by Fr. Moriyama Shinzō of Fukuoka diocese and consisted of a dialog between Bishop Otsuka of Kyoto and Protestant Minister Okuda Tomoshi, who for many years has been involved in programs of assistance for homeless people in Fukuoka. The symposium started out with the thinking of Pope Francis in his Apostolic Exhortation Evangelii Gaudium, which was shared by the participating speakers, that desires a Church that goes out into society without being afraid to become stained and wounded. There has often been a propensity to claim “self-responsibility,” but behind that propensity there is a kind of spiritual condition that is afraid of being hurt. The Japanese word for a “close bond” (kizuna) contains the word for “wound” (kizu). A healthy society can be said to be a “structure where it is safe to become wounded,” where one person’s wound is shared by all.
After Vatican II the Catholic Church certainly became open, but it is still afraid of changes. It tries to assist the weaker ones while itself remaining wealthy. If it is not to share in the insults Jesus received on the cross (“He saved others but he cannot save himself”), the Church must become poorer. The assembly closed with the conclusion that the Church has to become a respectable “fool” that nobody could physically imitate.