Fr. Phillip Cooke is a Jesuit Social Entrepreneur in Residence at the Center for Science, Technology, and Society at Santa Clara University. He spoke to us via skype from USA at the Social Apostolate meeting in Manila (because of the time difference he had to wait till 1:30 in the morning). As he explains it, “After laboring tirelessly for years in social ministries within the church, I have been seeking new tools to enhance, enliven and empowering our Jesuit Social Ministries (JSMs) so they can more deeply empower the poor”
Since “Social Enterprise” was a new idea for quite a few of the delegates, it was a very good opportunity to learn about different types of social enterprises, listening to concrete examples in three different countries and visiting some such enterprises in Manila.

The “Poor Farmer Solidarity Association” (Cambodia)
The first case study was the “Poor Farmer Solidarity Association” (PFSA), run by “Rural Development Ang Snuol (RDAS) of Jesuit Service Cambodia. The PFSA in a village is a group of at least 10 families of poor farmers. These families’ aim is the sustainable development of their own families and their communities through solidarity and a sense of unity and responsibility. They regain confidence in themselves and dignity.
With a membership fee of 1000 riel (about 0.25$) they start their own fund, from which the members can have small loans for farming (seeds) and or business. They can also borrow cows from the RDAS Cow Bank Program, set up their Rice Bank Program to have the security of rice for food or seeds when the harvest is not good enough, provide urgent assistance to those who are in dire need, and even coordinate special projects for the community like a small library or a new classroom. The PFSA has already more than 10,000 families, in 12 communes (each commune has from 8 to 10 villages). The Cambodian delegation explained to us also the process they follow to start a new PFSA and their collaboration with the leaders of the commune. 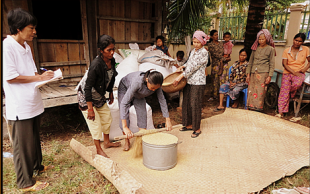 Rice Bank in a Village (Cambodia)

The “Light of Prosperity” Credit Union (Indonesia)
The second study was presented by the delegation from Indonesia. After explaining the seven principles of Social Business quoting Mr. Muhammad Yunus (muhammadyunus.org/index.php/social-business/social-business), they showed how Pelita Sejahtera (“Light of Prosperity”) Credit Union provides financial services to the poor, who are left out in the conventional Credit Unions in Indonesia. They also explained the way how they run their business and its contribution to inter-religious dialogue because their members are 13% christians, 27% catholics and 60% muslims.

The “Ignite Catering Services and Ignite Cafes” (Australia)
The delegation from Australia, after explaining the vision of their “Jesuit Social Services”, their mission, “standing in solidarity with those in need, expressing a faith that promotes justice”, and their organization and way of proceeding, presented to us their program “Ignite Catering Services and Ignite Cafes”. These are social enterprises, several cafes and a catering business, designed to provide training and employment for long-term unemployed. They are not-for-profit. A “living classroom that offers skills, connection with peers, mentoring and job prospects, recognizing that employment and training provide a crucial pathway to community engagement”.
Since 2012 there have been 90 participants. 60% have gone to secure employment. 6 have been employed by Jesuit Social Services, including a chef accountant and a delivery driver.
Their conclusion was “We do not employ people to make coffee; we make coffee to employ people”.

Besides these case studies, the following day we had the opportunity to visit three social enterprises in and around Manila.

The “Gawad Kalinga Enchanted Farm”
This is a very big social enterprise. Its master plan aims to bring the villagers around the farm out of poverty. Entrepreneurs under the Center for Social Innovation (CSI) will set up small scale business there. For that purpose they have a school where underprivileged children are taught to become entrepreneurs, and are planning to start also a university there. Mr. Tony Meloto, the manager, is a graduate of Ateneo de Manila University. He spoke to us with deep conviction, saying that, since he had been able to study at the university thanks to a scholarship, he had to repay for what he had received We could listen also to three young people studying there who spoke about their firm determination to become social entrepreneurs.

“Rags2Riches”
This is a social enterprise developed to help poor families living in Payatas, the largest dumpsite in the country. The nanays (Filipino for “mothers”) used to eke out a meagre living by making floor mats out of scrap cloth they found in the dumpsite, because most of the profit went to the intermediary agents. Then, from 2007 they became part of a social enterprise that sells beautiful bags made from rags. We visited their workshop and also one of their small stores in Makati City. 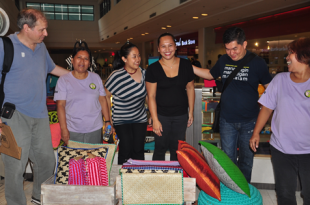 A Shop of “Rags2Riches” (Manila)

Since in Japan large companies seem to control practically all the market, I always thought that this type of social enterprises was almost impossible here. But after listening to the presentations of the above concrete examples, and visiting some enterprises in and around Manila, I have begun to think about possibilities that could work also in Japan.