I just joined the Social Center last spring. I am a Jesuit brother, Yoshiba Hiroaki. I am still moving about a little confused but I hope to become accustomed soon. I need a little help.
After joining the Jesuits my main field of work, up to the present, has been social welfare matters. In the past I contributed two articles to the Social and Pastoral Bulletin of the Social Center. The first one (Bulletin no.131, April 15, 2006) was on the Bethel Home, an institution for mental patients, located in Urakawa town (Hokkaido). The second one was a report concerning a new Consultation Bureau at St Ignatius Church that was published on February 15, 2010 (Bulletin no.153).
Reflecting on those activities, I think that such experiences have deeply moved me to continue working in the same fields.
I consider myself a product of the bubble economic times and, although I graduated from an unknown university, I have among my classmates some who were offered jobs from around ten different companies. Soon after graduation I myself found a job and, although I don’t remember having received any bubble benefits, I think there were many offers with idyllic types of work. A little later I had the experience of losing my job and due also to the economic recession I continued working irregularly for six years without being able to find a stable job. Nevertheless, there were still regular employees and ‘freeters’ like me, although few of them could afford room for maneuver. But little by little I clearly realized that unless people are highly skilled, they will not only be unable to find fixed jobs but will also find it hard to survive in society with stability of life.
The other day I was sharing with others a book I read about daily anxieties. A young person in his early twenties said, “What is that ‘affluent society’ the book talks about? Up to now I haven’t experienced any such thing.” This statement impressed me quite deeply. For me (maybe for us all?) an affluent society is somehow something self-evident. It refers to a society that respects people who have proper jobs, or to the lives of people who can enjoy themselves apart from their workplace, or to those that earn enough income from doing just one job in order to live an “ordinary life.” (Will this be too poor a conception?) People like the young man I mentioned have been enclosed since birth in a too narrow society and, because everything has been carried away, even if people speak about an “affluent society” it doesn’t ring a bell. On the contrary, perhaps they react critically saying, “You are thinking comfortably of the past, while there is nothing like such a thing at present.” 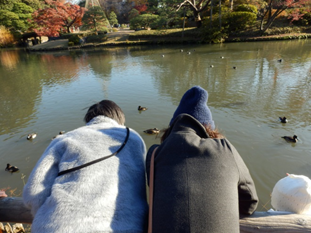 Criticisms such as “young people today do not have critical thinking” or “they are driven by a contemporary social values system”—would these not somehow be in contrast with a sense of “flattering” society in order to be able to survive? I rather thought that together with the next generation they could consider models of a desirable society and, by proposing possible images to be implemented walk a little ahead of the times and, sooner or later, at the time of retiring their role will be to implement the tasks we should have been doing.
Our society is sometimes called “Yankee society” or an “anti-intellectual system.” Since I am not an expert in sociology, I cannot say whether that is an adequate assessment of modern society. Nevertheless, the above expressions somehow tell its true content.
Is it not true that, when discussing something, we consider various options and, looking back at the past, at times we don’t come to decisions after reflecting and discussing the matter with others, but on the contrary, neglecting to use our minds and literacy, we strengthen our former ideas and beliefs with courage and common sense and, often enough, make similar judgments and decisions?
Therefore, there is an insistence on proving things that do not exist and, worst of all, establishing policies with cruel conclusions.
Judging from such realities, I can explain some of the causes of phenomena like hate speech. In reverse, liberals in our society are now losing ground to convince others, because they express themselves in the same context as before. Thus, whether or not they are telling true facts does not have any influence on people. I feel I can explain why that happens. There is a need to return a flexible intellectual research mind to society.
Looking at my qualifications and at what I can do, I don’t think I will be able to work as much as the Center’s senior members. Nevertheless, keeping in mind and in my heart what I have expressed above, I want to analyze theoretically the structural dimensions of poverty, in accordance with the teachings and directions given by the Popes, particularly taking into account what is actually happening now to people living in Japan.
It would be wonderful if the Social Center could become a kind of a dispatch hub of study and research to guide us onto future orientations to be taken.