Jesuit Network for Migrant Workers in East Asia and the Pacific

A group of representatives, Jesuits and their collaborators working for migrant workers, from 6 countries and regions of East Asia and the Pacific (JCAP Assistancy) met in Jakarta (Indonesia) during the first week of June. Fr. Benny Juliawan, SJ, the appointed coordinator for migration in the JCAP region, convoked the meeting. The aim was to expand this group to include new jesuit institutions as they come along in the future. Vietnam and Malaysia in particular were considered. 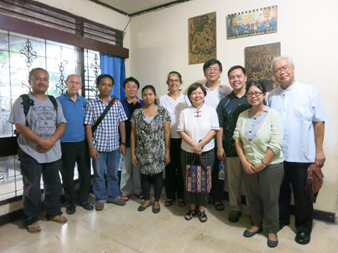 A 3-year (2015-2017) action plan was decided. The plan focuses on migrant workers and  undocumented migrants. JRS activities, which include victims of trafficking, are also to be addressed. One major common concern is the need to pay attention to the present brokerage system badly affecting most migrant workers in our JCAP region.
Since the JCAP Assistancy includes sending and receiving countries of hundreds of thousands migrants yearly on the move, the participants agreed to a close collaboration of vital information for migrants from receiving countries to the sending ones and viceversa.
The new Jesuit network of collaborators decided on research grants to be assigned to each country represented for the next 3 years. The topics will be a) welfare of migrants’ children (2015) b) repatriation and reintegration of migrants (2016) c) brokerage (2017).
More detailed information on the subject will be provided in the next issue of the Bulletin.