FIFTY YEARS IN TAIWAN …to go wherever there is need 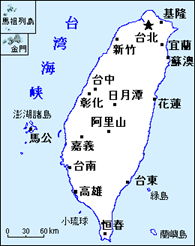 When World War II ended, the Chinese people were looking forward to a period of peace after 8 years of fighting the Japanese. Their courageous resistance to the Japanese had won the admiration of the world. In 1939 the Vatican rescinded its 300-year-old prohibition of Chinese civil rites, permitting Catholics to take part in ceremonies honoring ancestors and Confucius. It seemed like the Gospel would be free to spread over the whole nation, but instead it entered a period of even harsher trials. The ruling Nationalist Party was overthrown by the Communists and retreated to Taiwan in 1949.
In 1950 the atheist communist government began to expel foreign missionaries, while native churchmen were arrested and imprisoned. Most heartrending was the martyrdom of Fr Beda Chang, principal of the Catholic High School in Zikawei, Shanghai. In order to safeguard the vocations of young Jesuits in training, arrangements were made for them to join the flood of refugees leaving the country to continue studying elsewhere. In 1951 Californian Fr Edward Murphy was the first Jesuit to enter Taiwan as a missionary. From 1952 on there was a continuous stream of Jesuits from many nations entering Taiwan to labor in the vineyard there for the glory of God. In all 579 Jesuits were stationed there in the latter half of the century. Besides Chinese there were men from many nations in Europe, North America, South America and Asia. This diversification and internationalization has enriched the Chinese Province of today.
The first missionary efforts in Taiwan were in Hsinchu and Taipei. There was a confusion of languages, nationalities and cultures, foreigners from everywhere, Chinese from all over the mainland speaking with different accents, local Chinese speaking Minnan and Hakka dialects, plus all the older local people who still spoke Japanese from the time of Japan’s occupation, and there were all the aborigine tribes with their own languages. This encounter with such diversity enriched the incoming Jesuits who in the spirit of Mateo Ricci learned the languages and adapted the customs to enter in and become part of their local communities.
Taiwan after the war was undergoing many upheavals. The Jesuits not only preached the Gospel, they came to the support of Taiwan offering educational, medical, and social assistance.
In the 1960s, the situation in Taiwan gradually settled down, but the people were still rather poor. Many left the countryside to seek jobs, education, or better lives in the cities. They were greatly in need of guidance and education to relieve the culture shocks of new ideas and demands. The children born after the war have grown up to occupy prominent positions in all walks of life. Baptized or not, great numbers of these people have had contact with our Society, attended Jesuit-run schools, experienced the strict yet loving care in Jesuit-run hostels, participated in Jesuit-run educational, social, literary, artistic and recreational associations and events, made lifelong friends with Jesuits, were helped in hard times by Jesuit-sponsored assistance, treated in Jesuit-run clinics, entertained and enlightened by Jesuit-produced radio and television programs, slideshows, documentaries, magazines, books, and a continual bombardment of news items about Jesuits and their activities or participation in public events. Thus Catholics in general and Jesuits in particular have kept the lamp of the gospel burning where all can see it to fulfill their mission to be the salt and the light of Jesus drawing everyone to Himself.
Given the rise in Taiwan’s prosperity over the years and the present changing social priorities, Jesuits need to always keep sharpening their insights and stay attuned to the pulse of society to update and broaden and deepen the scope of their service. This is quite a responsibility which is why it is the Jesuit way of proceeding to understand “more” the needs of society, to develop “more” effective means of action and “more” effectively serve others even “more.”
Jesuits can be found everywhere in Taiwan dedicating their lives in service for others through pastoral care (parishes in Hsinchu, Tainan, Chia Yi, and Kaohsiung in the cities for everyone and in the mountains for the indigenous tribes, Manresa Center of Spirituality, Ignatian Spirituality Center, Christian Life Communities, Christian Service Community, Marriage Encounters, Apostleship of Prayer, etc.), education (Fu Jen Catholic University, St Ignatius High School, St Aloysius Industrial School, Tien Education Center, etc.), in mass media (Kuangchi Program Service, Kuangchi Culture Group, Renlai Magazine), inculturation (Aurora Center, Ricci Institute, Xavier Cultural Center, Tien Culture Foundation), Social work (Rerum Novarum Social Service Center, Hsinchu Catholic Social Service Center, Hua Kuang Center for the Retarded, geriatric, hospice and oversea workers apostolates), plus numerous individuals who in addition to their regular duties are artists, writers, lecturers, inter-religious dialoguers, performers or just active members of civic and community activities.
There may not be many Catholics yet in Taiwan, but there are few non-Catholics who have never seen or heard of some Jesuit or not, had their life affected in some tiny way by the ripples spreading out from what some Jesuit said or did, even though they may not have known who or what that Jesuit was.
Taiwan is a very special place where the torch of Chinese culture and freedom was kept burning during the upheavals on the Mainland. Now it is Taiwan’s mission to ensure that the light of that torch may shine on every Chinese community throughout the world.
For 50 years now, Jesuits have been in Taiwan living, laughing, weeping with the people. Those we first served are all very old or already gone, but we continue to make friends and to serve both young and old. It is our earnest prayer that from the ranks of those we serve young men will come forward to join our company to continue and extend our work long after we are gone.