When they first arrived in Taiwan in the early 1950s, the Jesuits found an island quite different from what it is today. Martial law was on and dealing with social issues was not an easy or simple thing. This did not prevent some to fight for more justice, for workers’ rights, with the consequence that their staying on the island was questioned if not forbidden. Others such as Fr. Istvan Jaschko (葉由根), who died in 2009, fought for the rights of the disabled and set up institutions, which have been highly praised by the government and continue today the work of their founders.
Today, the situation has greatly changed. Dormitories for young workers are no longer needed in the form that they had in the 1950s and 1960s. Laws have been passed which protect rights and democracy has permeated civil society. This does not say that social issues no longer exist and, through centers set up by the pioneers of the 1950s, the Society of Jesus in Taiwan continues to work for more justice and respect of everyone in society.
At present, the Society of Jesus runs two social centers in Taiwan and continues—through parishes—to work with aborigines.
In the 1960s, an American father, Fr. E. Dowd founded in Hsinchu (新竹) a vocational school and dormitory for young workers. Today, it has evolved into a “Social Services Center” (新竹社會服務中心), a “community center”, which employs some 30 persons and is divided into several sections. First, to answer to the needs of the aging population, in the 1990s, it set up a day-care center, which receives at present some 50 elderly every day and is considered as one of the best in Taiwan. It has also a “Home Services” section with social workers visiting the homes of elderly and disabled persons and providing them with required services.  Another section offers counseling services to households and families in difficulties. It also runs various vocational and artistic classes.
This center is well known in Hsinchu, well supported by the local government, but it has to face several kinds of challenges. First, the challenges provoked by some big and famous institutions, which are now more and more present in Hsinchu. Second, the greater demands from the government in its assessment of social institutions. Then, a last challenge is to see, with no Jesuits working in the Center, how it can keep its Ignatian spirit and make sure that the Center remains with the poor and for the poor. A Board of Management, made of seven persons (three Jesuits, one Sister, three lay persons) and meeting three times a year, is responsible for helping the Center and its directress, Ms. Yang Yinmei (楊銀美) to face up with these challenges and bring a Magis Ignatian Spirit in the activities of the Center.
Established in the 1970s to respond to the rising questions of individual rights and interests of workers, in the 1990s the Rerum Novarum Center (新事社會服務中心) expanded its serv-ices to help those workers suffering from occupational injuries and to care for the foreign workers who were coming in greater number to Taiwan. At the end of the 1990s, following the huge “Jiji Earthquake”  (集集大地震) of September 21, 1999, it developed its services among the aboriginal communities of Nantou County (南投縣) and after 2004, in Hsinchu County.
The Rerum Novarum Center employs at present some 10 staff full time and others part time. In Taipei, where it is located, its works centers mainly on the care of foreign workers, providing assistance, through interpreters when needed, and shelter if necessary. It continues to have a section caring for those victims of occupational injuries and accidents. It also provides help for the employment of aborigines who have moved to the cities and it runs the two antennas it has among local aborigines in Nantou and Hsinchu Counties. 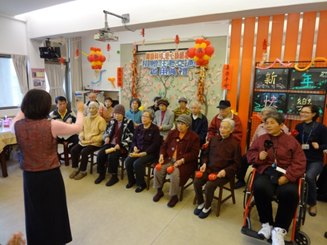 In Nantou, its main contribution is the help for the production and sale of High Mountain Tea among aborigines, the Alang Tea (阿朗茶). After not so easy beginnings, this brand is now known among tea connoisseurs, and it has helped poor aboriginal farmers to improve their standards of living and face, after the disaster of 1999 a brighter future. In Hsinchu, tutorial classes for Junior High School aboriginal students were set up in 2005 and Rerum Novarum services were extended to the care of households in difficulties and to the help in the sale of “honey peaches” in the summer, a delicacy of the aboriginal villages of Hsinchu County and on which the economy of many families depend.
The Rerum Novarum Center is also run by a Board of Management and composed of nine persons (2 Jesuits and 8 lay professionals from all sectors of society). In many ways, what it is doing now is quite different from what it did in the 1970s. But one could also argue that it is continuing in the same line. The oppressed workers are not so much Taiwanese but foreign workers who are often left alone and poorly treated. Caring for them is an important question of justice in the Taiwanese society. This is what the Rerum Novarum Center, under the direction of a very energetic member of the Mercedarian Missionaries of Berriz, Sr. Stephana Wei (韋薇), is now doing.
Among the Taiwanese citizens, aborigines are often discriminated and count as the poorest and most of the unemployed. This is why the Rerum Novarum center has also turned its attention to this category of the population. In Hsinchu County, the Center works along with several Jesuits who run parishes in villages, often far away from the main roads, and populated by the Atayal tribe. It is there, in these poor villages, that Jesuits in Taiwan do “direct” social work. Those parishes have been run by the Society of Jesus since their creation in the 1950s, and are very active and lively. One cannot forget that at least two fifth of the Catholic population of Taiwan (probably around 200,000) are aborigines. But, there we encounter most of the problems that plague the aboriginal communities around the world. If we can bring the Good News of the Gospel, we must also help these persons—especially the young—face a world where their culture and traditions could disappear if nothing is done.
Much more should be done and the greatest challenge the Society of Jesus faces regarding the Social Apostolate is the lack of manpower and persons trained in that sector. This is what this region plans to do in the coming years. Training more Jesuits and lay collaborators for the service of the poor is an urgent priority. For this, we need persons (obviously), time (surely), money (necessarily) but also confidence that the Ignatian spirit of the Magis (More) will continue to speak to those poorest whose life and hopes have been shattered.