My experience of culture shock in Australia

It has been 10 months since I arrived at Melbourne (Australia) for study of Ignatian spirituality after ordination and finishing theology at Sophia University. During my formation time I had some experience of other cultures, e.g. other Asian countries, such as India, Korea, Philippines, Vietnam and Malaysia, and in addition to these, some countries in Europe and Latin America.  All of these had brought some insights and expansions to my horizon, but I have experienced a specific culture shock here, in Australia, in terms of the following aspects.
First of all, the most impressive thing I have experienced here is about the Australians work ethic. It is also connected to how to take a rest. For example, it is now the holiday season in Australia and most Australians take a holiday, at least for three weeks or more from before Christmas to the end of January. For Australians it is important to spend these weeks with family and friends. The holiday, for Australians, has definitely important meaning and special value; “holiday” is a first priority. It seems that the word of “holiday” is sacred like a small pillbox of “Mito-komon”. 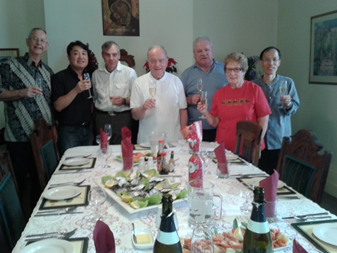 Taking a holiday is completely different from the Japanese workers’ situation. For Australians the culture of holiday demonstrates their work ethic. I have often heard the expression “quality of life”. Although we, Japanese, can also use this same expression, but while for us it remains and ideal, it works differently because of our severe working conditions; such as working long hours in “a black company”.But here, in Australia, this value of “quality of life” really has penetrated not only the individual idea and style but also the social systems as a common value. They always show a concern for the appropriate balance between work and rest.  “Working too hard” is not an admirable thing among them because it means making a sacrifice of more important things, like spending time with family. I have been really moved to see how many dads play with their children in every small park on the weekend.
Furthermore, there are also other things that show the Australian work ethic. For instance, I was absolutely shocked to discover that the minimum wage in Australia is $16 (¥1600) per hour. I found it difficult to believe at first, given that in Japan the minimum wage is currently ¥750 per hour, roughly half of what it is in Australia, and still there are arguments for its further reduction in Japan.
Actually, I understand that the labor conditions in Australia are relatively better than in other developed countries such as Japan, USA, and UK etc.., although there may be some exceptions to this, most notably in the food‐service industry . Therefore many international students, including some of my friends, come here every year because of these better labor conditions. Some people with professional skills and jobs in their own country, for example nurses, try to get the same job here because of the differences in labor conditions. They know that the quality of life might consist not only of more money but also the balance between work and rest. This shows that the work ethic is an accepted value in Australian society.
Although each country displays different and quite specific conditions, and that it is not appropriate to compare them at face level, nevertheless the value of “quality of life” might make people happy, in every country.