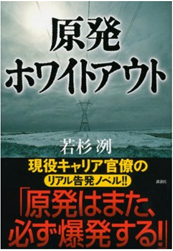 The author of this novel is a bureaucrat working at a ministries and government office in Kasumigaseki. Under the disguise of a novel the book tries to disclose plainly, from an insider’s point of view, the real ambitions of power companies, government official ministries’ offices and politicians to re-start the operations of nuclear plants. The real nature of the so called “nuclear power village” of those that try to defend their vested interests is exposed there in all base-naked truth. By reading the book one can clearly recognize how company managers, officials and politicians paying each other at mutual profit build up structures of close relationships.
On the other hand, one can say that, this novel with strong elements of an insider’s impeachment is, at the same time, an attractive literary piece of quite interesting entertainment. The novel describes not only the residents of the “nuclear power village”, mentioned above, but also the romance story of a former TV female announcer, opponent of reopening nuclear plants, who was herself acting dangerously in conspiring with a government official to disclose secrets. Each person concretely described in the novel, according to his/her different social position expresses vividly feelings and opinions. Such human characters will not get readers weary. The author himself is an experienced official and though one cannot say that he dislikes talking to people in their one’s eyes, from the point of view of getting to know part of the customs, ways and values people in high government positions hold, the novel arose in me an extraordinary and deep interest. I felt that most probably this work became attractive because of that.
The ways how the second part of the story develops, proceed in destructive direction, but it can be taken as a critical expression of the actual situation of the author himself. The re-starting operations of nuclear energy are openly promoted under the present government and the author, focusing his attention on the key persons promoting it, composes his story and makes publicly visible their concrete features. This is very well-timed and I feel good that his highly critical outlook is praised. To have this book at hand will certainly help many to know the true facts. (K. Yamamoto)