Asia Pacific: Islands at risk: Climate change in the Pacific

“We live in constant fear of the adverse impacts of climate change. For a coral atoll nation, sea level rise and more severe weather events loom as a growing threat to our entire population. The threat is real and serious, and is of no difference to a slow and insidious form of terrorism against us.” Saufatu Sopoanga, Prime Minister of Tuvalu, at the 58th Session of the UN General Assembly, New York, 24 September 2003. 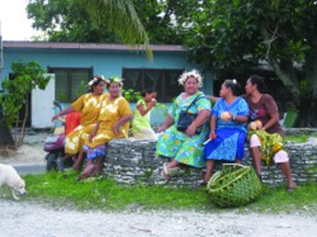 Sydney, 11 April, 2011 – Over the past decade a new term has entered the lexicon of policymakers and the media: ‘climate change refugees’. Human movement caused by environmental factors – drought, land degradation or significant climate events (like cyclones) – is not new; what is new is the number of people thought to be susceptible to such pressures and the attention these movements are now getting.
In its daily work, JRS encounters people displaced by a multiplicity of factors including climate events. In some places, such events are cited as the primary cause for displacement, for example in Aceh, while elsewhere, such as Darfur and Chad, climate change is just one of many factors explaining displacement. In a recent report, “The Anatomy of a Silent Crisis”, Kofi Annan described millions of people suffering because of climate changes and millions uprooted or permanently on the move because of these changes. According to the UN High Commissioner for Refugees, Antonio Guterres, it is becoming difficult to categorize displaced people because of the combined impact of conflict, the environment and economic factors.

Mapping displacement
It could be argued that JRS in the Asia Pacific region is well positioned to engage with the issue of forced displacement due to climate. This JRS region is home to both the vast deltas of the Irrawaddy, Mekong and Yellow Rivers, deltas where every year millions of people are displaced annually by floods, as well as to the majority of the world’s small island developing States. All these settings are thought to be particularly vulnerable to rising sea levels. In the past few years JRS Australia has been mapping displacement in Timor Leste and the Pacific in an attempt to understand and anticipate future displacement in neighbouring countries. This work has deepened our engagement with New Zealand and with other Pacific nations and has moved JRS away from a dominant focus on asylum seekers and 1951 Convention refugees.
In May 2009 JRS visited Kiribati and Tuvalu with Associate Professor Jane McAdam, an international lawyer from the University of New South Wales. Having worked for many years in the area of forced migration, we wanted to explore the impact of climate on the movement of people in the Pacific, and to hear how the people characterized their situation and viewed their future.

Sinking islands
The small island nation states of Tuvalu and Kiribati are located in the Pacific and are frequently cited as the two nations most at risk of disappearing if sea levels rise as predicted in the next decades. These  former British colonies straddle the equator and were formerly known as the Gilbert and Ellice Islands. They gained independence only some 30 years ago and have featured in media reports as ‘sinking islands’ that will be uninhabitable by the middle of the century. The media has reported that their people will become the world’s first ‘climate refugees’. Kiribati (pronounced Kiribass) has a population of around 100,000, while Tuvalu, with only 10,000 people, is the world’s smallest State (apart from the Vatican).
Climate change is undeniably having an impact on these low-lying atoll nations, whose average height above sea level is less than two meters. Driving along the main road on the central Kiribati atoll of Tarawa, we could frequently see the lagoon on one side and the ocean on the other. The sense of vulnerability to the environment was palpable, a vulnerability that is magnified when there is a major climate event like a cyclone or king tide.

Dying interest
While in Kiribati and Tuvalu we were surprised to hear that 10 years ago any meeting related to climate change would draw a large crowd but that in recent years the interest has died down. People talked of a familiarity with the concept of global warming and climate change but acknowledged a lack of certainty about what impact these issues might have on their future. Many had very limited knowledge of the science behind climate change and, like most, were baffled by the ever changing predictions made by ‘experts’. Elders told us that the better educated were more concerned than others while those on outer atolls, those who have less exposure to the media or community education, would not be too w 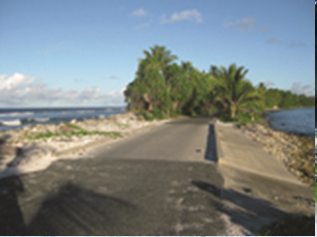 orried; people dependent on the seas and land for survival, they were familiar with changing climate and how to manage it.
People described the changes they had seen in their own lifetime, shrinking coastland, increasingly salty drinking water and failing coconut trees. Income earners faced a lot more pressure to care for their elderly and extended families because of difficulties in relying solely on the land and sea for food. Many grappled with faith-based beliefs that God had promised Noah there would be no more floods and God could be trusted to keep this promise today.
Regardless of the levels of awareness, many inhabitants of both countries said they were making contingency plans for the future. These plans focused on the youth. The prevailing wisdom was that many of the young will need to move to Fiji, New Zealand or Australia for education and work. Traditionally both Tuvaluan and i-Kiribati have embraced seafaring as an honorable and culturally appropriate occupation that has taken them abroad. Nowadays there is recognition that the need for nurses, carers and cooks in Australia and New Zealand can facilitate migration options and ensure a salary sufficient to enable a proportion to be remitted back to family members who stay behind.

Rejecting the refugee label
While facing similar issues, Tuvalu and Kiribati were not identical in their approach or the pressures faced in relation to climate change. Nevertheless, in both countries, what we did discover was a wholesale rejection of the refugee label, both at the political and community levels. For them, the term ‘refugee’ is insulting, invoking a sense of helplessness and a lack of dignity, which contradicted their strong sense of pride. Some also felt that to be a refugee required a negative view of one’ s own government and they did not wish to signify this.
We were mindful that the term ‘refugee’ was legally inaccurate as these people were not facing a well-founded fear of persecution on account of their race, religion, nationality, political opinion or membership of a particular social group, nor were they outside their country of origin, nor was their government unable or unwilling to protect them. Still we were surprised at how strongly the people of Kiribati and Tuvalu rejected the ‘refugee’ label. They did not recognize the strength and resilience that JRS knows in refugees; rather they were fearful of being labelled as a burden, an unwanted excess of people at risk of being encamped. The global media’s frequent portrayal of refugees as such, had reached these distant shores.

Not just climate change
The impacts of climate change on low-lying atolls must not be underestimated. These nation states have enormous challenges for the future. However, during our visit, we perceived a risk that solely focusing on climate change obscures other social changes, which together provide a more realistic impression of why people act as they do, including whether they stay on their atolls or seek to migrate elsewhere. Such an approach acknowledges the seriousness of climate change as a tipping point that exacerbates pre-existing social, economic and environmental pressures. How to best conceptualize these issues and assist populations to find meaningful options while in the international limelight remains a huge challenge. Refugees or not, protection mechanisms need to be put in place to ensure that people are not left struggling to survive in ever diminishing settings while the world debates the realities of climate change.