Vietnam. My Surprise 21 Years Ago Reflections on Assisting Developing Countries 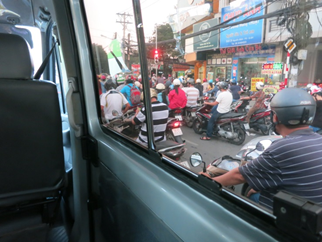 I first visited Vietnam in 1992 and remained stationed there till 1998. At the time of the “doi moi” policy, when foreign capital began to be welcomed into the country, I toured numerous local regions in Vietnam looking for business investment possibilities. That was before the Vietnamese development boom, before the Constitution was revised, before Vietnam joined ASEAN, and before the official Trade and Commerce negotiations with the United States of America took place. It was a totally different world from my own common sense ideas of developing countries.

1. Towns using American dollars
Developing economies have great difficulty in obtaining foreign currency and its control is troublesome.  But American dollar bills circulated openly all over Vietnam. Prices of goods at the shops were written in dollars and, surprisingly enough, the change came back in American currency whenever one paid with American dollar bills. So far as I knew, no other developing country was doing this. It was believed that the Vietnamese deposit of American dollars was about one or two billion, and people jokingly said that the government was replacing its debts with American dollar bills instead of asking abroad for the printing of large amounts of paper money. The highest Vietnamese paper currency at the time was 5,000 dong, but 10,000 dong bills were soon issued. I do not remember exactly, but I think that 1 US dollar was worth about 8,000 dong at the time.
Similarly, gold substituted for large amounts of paper money. Gold rings were normally in use and many shops around town were doing business with gold. Even small shops used gauges to measure gold contents and machines to weigh heavier gold contents.

2. Towns with Good Security
I had never before experienced towns with such good law and order. The security in Vietnam was, without comparison, much better than in African or industrial countries. I felt that the security was similar to that of Japan or even better. Of course, there were pickpockets, thieves stalking around and hungry people wriggling in the streets, but the situation made it unnecessary to undergo all the precautions and stress that go with living in a foreign land. Most probably this was because weapons were not for sale to individuals in the market. That was totally different from countries like Zaire, with the Congo civil war, and Nigeria, with its Biafra civil war, and other areas where I had been stationed. In those regions arms could be bought by individuals and I always maintained a cautious attitude of concern about armed thieves. My bias toward Vietnam which had been built up in me because of the long Vietnam War came crumbling down.

3. A book store town
I was impressed to see so many people reading books and magazines. Everybody seemed to enjoy reading: cyclo drivers, young mothers at street stalls and young fathers behind their scales and, of course, university students. Although I could not understand the content, they were not reading difficult books or comics. There were many well equipped bookstores along the streets. Nevertheless, there were no maps. They had maps for tourists but I could not find contour maps anywhere. I had to buy such maps in Japan produced by the American Pentagon. It was certainly possible to apply for them at a government office and buy them in Vietnam, but it was forbidden to take them out of the country.

4. Towns without traffic lights
There were almost no traffic lights even in Hanoi and Ho Chi Minh City. And even if there were, they were not functioning. There were not many cars on the roads, but many bikes, bicycles and cyclos. They drove down the main roads like a rushing torrent. One had to be very careful 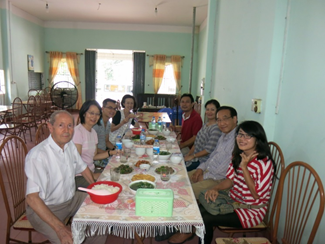 until getting accustomed to cross the street. It was not so complicated to cross once one caught on to the trick of how to do it. A Japanese visitor to Vietnam, watching the traffic and how people were crossing the streets, called it “a world of hydrodynamics.” The arterial roads outside town were also amazing. Road no.1 was full of holes, no. 5 had a bridge used jointly by the railways and cars, and people had to wait for 3 hours before crossing it. Again, there were no bridges, so ferries pulled by boats with semi-diesel engines were used to cross the rivers. Child vendors were actively selling souvenirs on the boats.

5. Abundance of food
The market places around town were always full of life and one could find there an abundance of all kinds of food. People could buy chicken meat, pork, pigeons, duck and any type of meat, as well as sea food and fish from the rivers, many kinds of vegetables with much greater variety than in Japanese supermarkets. Shops were also selling all types of staple food: rice Japonica, long rice, refuse rice and many other kinds of rice. According to the seasons, there were well-organized markets of unique delicious tropical fruit. Early in the morning, the flower markets opened and many people bought flowers to bring home for floral arrangement.
Since then 21 years have passed. Tall buildings have been constructed and cars drive around towns connected by a network of highways. There is a construction boom of apartment complexes, golf courses, hotels, hospitals and industrial parks. It is a world greatly transformed. On the other hand, there are also shadows accompanying such bright development. People who have been left out of the development stream can be seen everywhere in Vietnam. Assistance from our JapaVietnam grass-roots projects is still needed. There is no change.

I am greatly fond of Vietnam with its peace-minded and warm-hearted people and its abundant and excellent natural crops.