From the Catholic World(174)

Largest massacre of Christians in Syrian conflict
Nov. 4, (CWN): Rebel forces massacred 45 Christians in the west-central Syrian town of Sadad, according to Syrian

Orthodox Archbishop Selwanos Boutros Alnemeh. Islamist rebels entered the town on October 21; a week later, it was captured by government forces. “What happened in Sadad is the most serious and biggest massacre of Christians in Syria in the past two years and a half,” said the prelate, according to the Fides news service. “45 innocent civilians were martyred for no reason, and among them several women and children, many thrown into mass graves. Other civilians were threatened and terrorized. 30 were wounded and 10 are still missing.”

North Korea publicly executes 80 people
Nov. 12 (The Washington Times): North Korea’s Kim Jong-Un had 80 people publicly executed on Nov. 3, according to Korea’s Joongang Daily News. It’s the first known public executions since he took power after his father’s death. In seven cities across North Korea, people who had watched South Korean videos, “pornography” or possessed Bibles were killed. According to the newspaper, about ten people were killed in several cities. It is reported that the North Korean regime strictly prohibits the possession of Christian videos and Bibles, often calling them “pornography.”

Ghana Needs New Evangelization, Say Bishops
Accra, Nov. 19 (Agenzia Fides): The bishops of Ghana are calling for a “new evangelization” in a country where the “social, cultural, economic situation and political life is making the profound encounter with Jesus Christ very difficult.” The Conference of Bishops of Ghana asserts that “Ghana is a peaceful Country, emerging at an economic level, and it is a deeply religious nation.” They cite examples such as strong participation in religious services and moments of prayer at the national level.

Thirty years of the Church’s commitment in Africa against AIDS
Rome, Nov. 20 (Agenzia Fides): Thirty years of experience carried out by the volunteers and the various organizations of the Catholic Church in favor of women, men and children affected by the HIV epidemic in Africa have been collected in a book (AIDS 30 Years Down the Line—Faith-based Reflections about the Epidemic in Africa) that recounts the successes and struggles in this service. The many stories about the impact of this pandemic and the real situations of people and communities have been collected in the text published by AJAN, the network of African Jesuits against AIDS. This book also brings out the cultural and ethical issues and highlights the need for a global response.

Numbers of Iraqi Christian Emigrants on the Rise
Baghdad, Nov. 21 (Zenit.org): The Chaldean Catholic Patriarch Louis Raphaël I Sako is calling for Christians to remain in Iraq as daily attacks and bombings are causing Christians to emigrate at an increasing rate. Agence France-Presse reported that the “tenuous optimism after a brief improvement in security starting in 2008 has been dashed by a surge in bloodshed this year.” Patriarch Sako said some 61 churches have been attacked in the decade since the US-led invasion, with more than 1,000 Christians killed in violence, albeit not all in targeted attacks.

dium” at the conclusion of the Year of Faith, which reaps the fruits of the Synod of Bishops on the New Evangelization. The document discusses a) The reform of the Church in her mission, b) The temptations faced by pastoral workers, c) The entire People of God as evangelizers, d) The importance of homily, e) The inclusion of the poor in society, f) Peace and dialogue within society, and g) The spiritual motivations for mission.
The Pope indicates the danger of autonomy of the market in which financial speculation and widespread corruption and self-serving tax-evasion reign (56), and the temptations which affect pastoral workers (77): individualism, a crisis of identity and a cooling of fervor (78). He warns against defeatism (84), urging Christians to be signs of hope (86), bringing about a revolution of tenderness (88).

Central African Republic: mass violence and imminent threat to civilians
Washington DC, Nov. 1 (JRS Dispatches): The Jesuit Refugee Service and a number of other leading NGOs urge the international community to act quickly in the Central African Republic to protect civilians and prevent further atrocities against them. Key indicators of a deteriorating humanitarian situation and of continued violence against civilians include:

1.  Attacks that were once rebel-driven but are now taking on more organised ethnic and sectarian tones;

2.  Close to 400,000 internally displaced persons within CAR. Just under 220,000 refugees that have fled the country. 65,000 of these refugees fled as a result of the most recent conflict;

4.  Widespread rape, arbitrary killings, kidnapping, forced amputations and other abuses, and pillaging and looting of villages committed by ex-Seleka and other forces;

5.  Children, particularly girls, exposed to a wide range of forms of sexual and gender-based violence;

6.  Establishment of new counter-militias, motivated by climate of fear and retribution. Hundreds of armed young people are among the ranks, many of whom were subject to forced recruitment; and

7.  Limited UN presence outside the capital Bangui and large humanitarian coverage gaps due to insufficient security and protection. 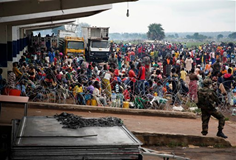 Rome Dec. 4 (Agenzia Fides): The dramatic humanitarian crisis in the Central African Republic is the focus of the meeting held on Dec. 4 in Rome by Caritas Internationalis and several Caritas working in the Country.

Rome, Dec. 6 (Vatican Radio): French troops moved into Central African Republic on Dec. 6 to try to quell violence in the capital a day after clashes left nearly 100 people dead. More deaths were reported in clashes overnight on Friday. France began sending reinforcements within hours of a U.N. vote Thursday authorizing its troops to try to stabilize the country. French officials have insisted the aim of the mission is to bring a minimum of security to Bangui and to support an African-led force.