Pope Francis: THE JOY OF THE GOSPEL 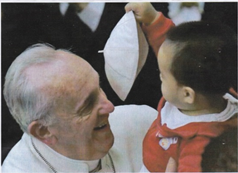 In the middle of November 2013, Pope Francis delivered his first long official document to all Christian believers on the joy of Jesus’ Gospel. Although the document is an Apostolic Exhortation and not a social document (184), Pope Francis presents the stance of the Catholic Church with regard to modern society following the teaching of former Popes from John XXIII and Vatican II to Benedict XVI.
The Apostolic Exhortation is long (about 80 pages A4 size) and it is impossible to summarize it in a short space. The Pope invites the Church and Christians to reach out to everybody, but in a special way to the poor and the sick, those despised and forgotten.
His approach to modern society is clearly manifested in Chapter 2,I “Some Challenges of Today’s World,” where he denounces the current economic system as unjust at its root. Such an economy kills. The excluded are not the exploited but the outcast, the leftovers. He laments: “How can it be that it is not a news item when an elderly homeless person dies of exposure, but it is news when the stock market loses two points? Can we continue to stand by when food is thrown away while people are starving?” (53) The autonomy of the market has become a new tyranny with widespread corruption. (56) No to a financial system which rules rather than serves. (57-58) The current financial crisis originates in the denial of the primacy of the human person! We have created new idols: The idolatry of money. (55) “No to the inequality which spawns violence. Today in many places we hear a call for greater security. But until exclusion and inequality in society and between peoples are reversed, it will be impossible to eliminate violence.” (59)
With regard to the Church’s teaching on social questions Pope Francis reminds Christians that the Church’s teachings concerning contingent situations are subject to new and further developments and can be open to discussion, yet there is a need to draw practical conclusions. “It is no longer possible to claim that religion should be restricted to the private sphere and that it exists only to prepare souls for heaven.” (182) If indeed “the just ordering of society and of the state is a central responsibility of politics,” the Church “cannot and must not remain on the sidelines in the fight for justice.” (183) “I intend to concentrate on two great issues which strike me as fundamental at this time in history… These issues are first, the inclusion of the poor in society, and second, peace and social dialogue.” (185) “Our faith in Christ, who became poor and was always close to the poor and the outcast, is the basis of our concern for the integral development of society’s most neglected members.” (186)
Interest and attention to the poor is one of the main concerns of the pontificate of Pope Francis. In Chapter 4 “The Social Dimension of Evangelization” he clearly states that “it is essential to draw near to new forms of poverty and vulnerability, in which we are called to recognize the Suffering Christ… I think of the homeless, the addicted, refugees, indigenous peoples, the elderly who are increasingly isolated and abandoned and many others. Migrants present a particular challenge for me.” (210) “I have always been distressed at the lot of those who are victims of various kinds of human trafficking.” Such an infamous network of crime is killing each day in clandestine warehouses, in rings of prostitution, in children used for begging, in exploiting undocumented labor. (211)
(Summary done by Ando Isamu, SJ, staff member of Tokyo Jesuit Social Center.)