How can we start the story of social apostolate of the Vietnamese Jesuits? I would like to begin with a Spanish Jesuit, Fr. Fernando Larranaga, SJ (1917 – 2013) from the year 1975.
On April 30, 1975, one tank of the Vietnamese communist troops hit and crashed a heavy gate of the palace of the president of South Vietnam. That was the end of the Vietnam War that lasted more than 30 years. North and South 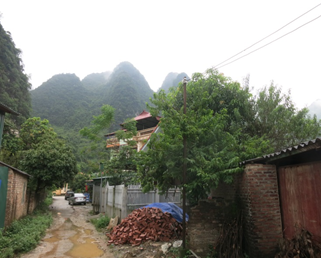 of Vietnam unified into one country. Since then, the whole Vietnam country has been living under the new communist regime.
What happened in Vietnam is similar to that what had happened in the former Soviet Union and in China when the communist parties held the reins of government there. Many people in the South were sent to jails and to remote areas to forced labor. They were officers of the former government as well as military officers. Many among them were Catholic priests. The new communist regime saw that they needed to be re-educated by hard labor.
The new regime has also been suspecting any charity work implemented by the Church and NGOs and they did not want the latter to participate into social charity.
In the post-Vietnam War times, Vietnam became poorer and poorer. It had to pay for what they had received in the past from its communist allies. At that time, one Vietnamese bishop asked Fr. Larranaga to support Vietnam. As a result, in 1984, Fr. Larranaga founded an office called “Aid to Vietnam” (ATV) in Hong Kong and became its first director. In 1994, he transferred his office to Manila and renamed it “Vietnam Service Office” (VS) under the umbrella of JCEAO (Jesuit Conference in East Asia and Oceania). Its old name was JCAP, (Jesuit Conference in Asia and the Pacific), at the Sonolux building in the compound of the Ateneo de Manila University. The goal of VS is to help Vietnam by supporting projects in 3 main fields: evangelization, education, and social development as well as to become a bridge between the isolated Vietnam Region and Jesuit Fr. General. Fr. Larranaga could continue doing social activities through his networking with many local parish priests and Catholic sisters in Vietnam.
The work of VS was continued by another Spanish Jesuit, Fr. Felipe Gómez, (1996 – 2008). The silent and long term work of Frs. Larranaga and Gomez were very effective. Many projects were implemented all over Vietnam. Many poor people were supported by them and their lives were changed. In 2007, VS was transferred to Vietnam with a new name “Alberto Hurtado Center for Social and Pastoral Service” (AHC). Michael Tam, a Vietnamese Jesuit, is at present the successor of Fr. Gomez.
Different from many other people in South Vietnam, the late archbishop of Ho Chi Minh Archdiocese, Msgr. Paul Nguyen Van Binh, looked at the events of April 1975 as a phenomenon that purified the Vietnam Church from her former richness of many schools, hospitals and many social institutes. When the Church in South of Vietnam lost practically all her property, the Vietnam Church became more spiritual and relied on God much more than on anything and anyone else. Moreover, once South Vietnam was liberated by the communists (as they are always claiming), Vietnamese Catholics have found opportunities of dialogue with communists and their atheism. In special ways, the social charity works of the Vietnam Church continued to do effectively.
After 1980, the young Jesuit Vietnam Region started to experience the “agony” of Chris 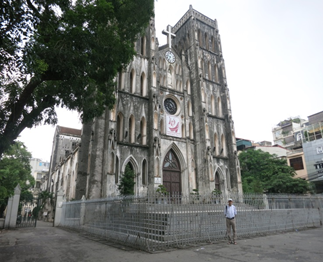 t: all foreign Jesuits were expelled out of Vietnam, most young Jesuit priests were put in jails, all Jesuit houses were confiscated, and the young scholastics lost their formation houses and trainer educators. Vietnam Jesuit region became underground until 2005 and, finally in 2007, it was considered to be the youngest Province of the Jesuit Society. Nowadays, God grants our Vietnam Province many vocations. At present, the number of Vietnamese Jesuit is 197 and about four fifths of them are in their formation period.
Even after the transferring of VS from Manila to Saigon in 2007, the actual AHC has now, more or less, the same social activities as those during Fr. Gomez’s time. Due to the fact of having so many young Jesuits, the priority of the Jesuit Vietnam Province is formation. Nevertheless, the number of Jesuits working in AHC is usually only two: a priest and one regent. In such a situation of lacking human power, AHC has, realistically, to accept becoming a bridge between donors and Vietnamese priests and sisters who are implementing social development projects. Working together with others in many projects of social development is one advantage for AHC now.
One new activity that AHC has started is the organization of workshop seminars on social work, social development and awareness of social justice. AHC cooperates with the network of Caritas Vietnam and other religious and priests. Such cooperation is not only because of the lack of human power but, it is also an answer to the directives of recent Jesuit General Congregations, like “Cooperation with the laity” of GC 34 and “Collaboration at the heart of mission” of GC 35.
The former works of Frs. Larranaga and Gomez should be continued in Vietnam. The story about the social apostolate of the Jesuit Vietnam Province needs to be told by other Vietnamese Jesuits also. AHC has to be patient until there are more young Vietnamese Jesuits that finish their basic formation. On the other hand, cooperation with other Jesuits of other Provinces and other people is “ipso factum” (a matter of fact reality) to AHC.

Please, do not hesitate to contact me any time. Thank you for your interest in the work of AHC.