ASSISTANCE TO EAST TIMOR / Small Library in a mountain village

Last year East Timor celebrated its 10th anniversary of independence and this year my work with the library donated to East Timor also reaches its 10th year. The opportunity to start this task was quite fortuitous. A large container with goods for a newly built monastery in East Timor was being sent and I was offered some space in that container to send Bible story books, children’s pictures books, and “kamishibai”.

I was supposed to use those materials in East Timor, but when they arrived I had to be back in Japan. I happened to meet a Japanese NGO representative running a library in their office of Los Palos in the Lautein Province of East Timor. During our conversation I learned that they were planning to open a library farther into a mountain area in a village called Iriomar. Within half a year I was able to help with the new library there.

In October of that year we went to look at the site, but the town was so small that there was practically no place available. We found only one house that could possibly be used as a library. The NGO I worked for decided to rent it. During my stay in East Timor I heard from a friend that someone in Japan was looking for somewhere to send picture books and on my way back to Japan I met that person. The books had already been translated into 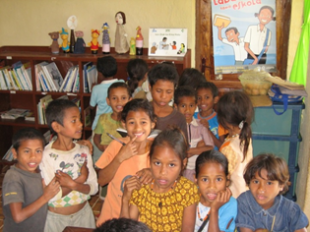 Indonesian and Portuguese and were immediately sent to East Timor. Moreover, in the Philippines I was able to meet an NGO that assisted with libraries there, and along with the technical aid and knowhow they shared with me, they donated many picture books. In December 2003 I brought these to Iriomar. I situated the library in the front room of the rented house and resided in the back room. Schools here might have a library with no books in it. This small library for children is now open in a place where people know nothing about libraries.

There was also a donation of books produced by an NGO in the native Tetun language. I placed more than 300 picture books and “kamishibai” on a wooden bed for people to see. Adults and children, watching this foreigner, gathered round out of curiosity, but when I tried to talk to the children, they ran away. I spoke with a teacher of a nearby elementary school and he brought children from different grades to see the library. As a result, now there are so many children visiting the library every day that it has become almost impossible for me to attend to them. Teachers from six different primary schools gather in the middle school of Iriomar and take turns helping me.

Later, thanks to the assistance of an NGO, an old building dating back to Portuguese colonial times was transformed into a library and facilities for local language research and two full-time staff members were chosen from volunteer teachers working at the library. They are still employed there. We face problems concerning staff changes and difficult issues regarding languages used and administrative difficulties, but every day many come to use our facilities.

The library foundation also owns another enclave besides Iriomar in West Timor, where it sends picture books to an orphanage and a religious convent. I was asked to be a consultant by an NGO who had been working in Iriomar before the library was built, but in fact, since I go to work there only two or three days a year, there is not much I can do for the many issues facing them.

I feel that there are limitations to foreign support for an organization managed by locals. Nevertheless, the existence of a library is important for infants up to middle school students and also for adults. I pray that the resolve and efforts of the local people will allow them to continue to manage the library. This will also contribute to the self-support and independence of East Timor.