Origin of Jesuit Social Service
At a sharing at the Development Officers’ Meeting in Seoul, Fr. Jorge Serrano told us what had happened at a meeting of donor agencies that he had attended.  The participants were asked to spell out their plans for a project they had in hand.  Some spoke of their plans for the next 5 years, others for the next 3 years and so on.  When it came to Fr. Jorge’s turn to say something he just said:  “My plan is to disappear as soon as possible!”
All were very surprised but understood what Jorge meant.  Fr. Jorge then told us that our involvement in any work has to be such that we are no more needed after sometime.  It is our special task to make the communities we work with self-reliant.
JRS had reached that stage in Timor Leste and felt that it had fulfilled its mandate here. JRS has been accompanying internally displaced persons in Timor Leste from 1998.  At this stage we pay our respects to Fr. Karl Albrecht, a German Jesuit of the Province of Indonesia, who was the Director of JRS in Timor Leste when he was murdered in Dili in 1999.
With the country having gained independence in 2002, there was a need to continue to work with those who had been internally displaced and to be there for those who would be returning from other countries where they had sought asylum.
It was felt that JRS had completed its mission in Timor Leste and needed to wind up its operations here so that it could concentrate on the Refugee situation in other countries.  Fr. Mark Raper felt however, that the needs of the many communities in Timor Leste called for a transition of JRS into JSS (Jesuit Social Service).  A number of the staff of JRS was asked if they would continue with JSS. As of 1st July, 2013 JSS has replaced JRS which was wound up a day earlier, on 30th June. 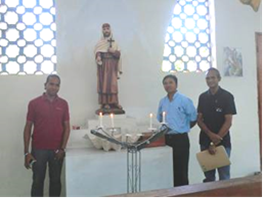 The present JSS team consists of Mr. Isidoro who was the Director of JRS Timor Leste.  He will continue as Director (part time) of JSS.  Assisting him are (a) Scholastic Juzito and Mr. Jose Soares – full time – for the Hera and Camea regions and (b)  Scholastic Albino, Lawrence Gigliotti and Br. Noel Oliver for the Ulmera region.  Ms. Jacoba will be assisting part time in the Finance department.
In the mean time we have met with some communities.  It is not that people have been waiting for us with open arms.  On the contrary, they have experienced NGOs who have come and gone!  We realise that it is only because of our continued presence (through our school in the Ulmera region and the proposed Jesuit Novitiate in the Hera region) that we can expect the communities to have faith in us.
During our meeting with Fr. Zeca we informed him of the transition from JRS to JSS.  We assured him that we wanted to work in close collaboration with Caritas (Maliana Diocese) and him. The focus of our work will be, for the time being, Hera and Camea (where JRS was involved) and in the communities around Ulmers, where CSIL and CSJB are located.
Fr. Zeca was very happy that we will be working for the improvement of the lives of the people and stressed that the most urgent need of the communities is water.  He also reminded us that the patron saint of the Parish is St. John de Britto, a Jesuit.  The photograph above was taken in the Church at Liquica in front of the statue of St. John de Britto.
In our meetings with the communities here, which included the communities of Hali Dolar and Akanunu, we have realised that the main problem of all the communities is WATER.  The process is on to see what the community would like to do about it.  JSS will be at their side.
We realise that in most of the communities that we have been to, the two most important needs are those of availability of water, especially in the dry season, and income generating activities.

With this letter I have wanted to introduce JESUIT SOCIAL SERVICE to you.  Do keep us in your prayers.  We realise that there is a lot to do and we will need strength and any other support which we can receive.  We are confident that we will be able to report some important initiatives of the people in due course.

MONTSERRAT Opens its doors
On the hill near to the Kasait village, and the Jesuit Educational Institute, twelve houses and a conference hall have been built in traditional style by the Centro Producao Audiovisual, the important communications project of the Jesuits in Timor Leste. This complex, now named ‘Montserrat’, and intended as a training center, will become an adjunct to the future teacher education college scheduled to open in mid-2014. Among other uses it is planned to accommodate the male students at the college. In the meantime extensive environmental recovery is needed to stabilize the magnificent site.
Scholastic Albino and Fr. Plinio have gone a step further. We are still in the process of getting the traditional huts repaired, because of the damage done to them by termites, but they decided to give in to the desire of the Canossian Sisters who had wanted to use the premises for a “Leadership building program” for their youth. 75 girls and 25 boys accompanied by 2 Teachers and 2 Sisters came over on Saturday 8th June morning and were at Montserrat till Sunday 9th evening.
They had to climb up to the traditional houses where they would be staying. The program consisted of a variety of activities, games and seminars during their stay on the hill. They finished their program with the celebration of the 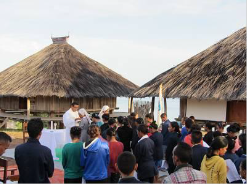 Holy Eucharist. The Celebrant was Fr. Plinio.
The youth seemed to have enjoyed themselves and seemed to have been sorry that they had to go.
We look forward to receiving many more youth and others to Montserrat. CARE Australia and even the Prime Minister’s Office have expressed a desire to use the place.
We are serious about proper repairs to these traditional houses. We will also need to have the kitchen repaired so that the participants will not need to bring food all the way from Dili, as was done this time. As mentioned earlier, these houses have, over the years been attacked by termites.
We have made proposals for having them made suitable once again for use. We realize that this will require funds. At the present moment the Region is on the lookout for funds for completing the School Project as also the Teacher Education College.
These are some of the traditional houses. After repairs, we intend using them as dormitories for the male students of our proposed Teacher Education College. The dormitories for the girl students of this College will be constructed closer to the school.
It is important to give you this update on our Montserrat complex. Much has happened in the past few months and much more needs to be done.

[A film made by CPA on the school can be seen on Youtube: http://youtu.be/IRebUDvOIwk]

Why Plant Trees?
t is Earth Day, isn’t it?
Not really. Earth Day was on Monday 22nd April, and today is already 4th May.
For the children of Colegio de Santo Inacio de Loiola, however, every day seems to be devoted to one of the important features that make Earth Day meaningful for them viz. They have been planting trees on the school property, which they have been doing since 15th January.
It was decided that 4th May would be made meaningful in memory of Earth Day. It was a Saturday.
Every Saturday, the Director of the Primary School next door, comes together with some of the staff and children of that school, for the weekly Eucharistic Celebration in the school. Today, after the Eucharistic Celebration, the Director and the children of the Primary School went to prepare their school ground for planting trees there.
We are also happy that such an event will draw us a bit closer to the community. Scholastics Isaias and Rui are already working with the youth of the village. Very soon we shall be starting some Community Development Programs with the   communities around. We will have more to report about that in due course.
The students were very excited about “earth day” at Colegio de Santo Inácio de Loiola and worked very hard to 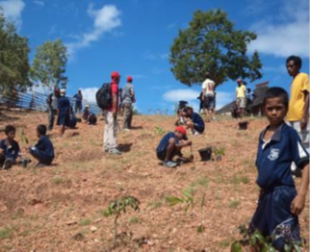 ensure that all the trees were planted. They know quite well that what they are planting today will not only provide green to the school but shady spots around the future school oval as well. The students managed to plant all the trees made available to them and were very proud of their effort in planting the trees.
Twenty seven boys and girls of our school were assigned the task of planting trees on Montserrat hill. They braved the hot sun, and walked towards the former CPA complex, which is now the temporary Jesuit residence.
At the end of the tree planting activity, they were tired but one can see smiles on their young and eager faces. They had done something positive for protecting nature.
They now have that great inner feeling of having accomplished something special for caring for our “mother earth”.
Scholastic Rui had prepared a song titled “Hadomi Ita Rai INAN” (To Love Mother Earth) which he taught the students as the concluding part of this great morning. In no time the students had learned this song about the need to care for planet earth.

The song was sung with vigor, excitement and energy.

Our planet is our home. The Solar System is our neighborhood
If we ruin our planet We won’t be able to escape on a Comet

An Earth without trees is like a bald man’s head

Our request: Could you please give us some feedback about what we should do to make this a reality. How can we help more and more the poor to get a good education and hope for the future?