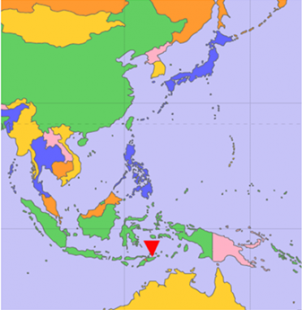 In May 2013, I was sent from the Japan Province of the Society of Jesus to the independent Jesuit Region of Timor-Leste to work in the middle-high school “Colegio Santo Inácio de Loiola” and in the Faculty of Education of the university “Colegio São João de Brito.” The Colegio Santo Inácio de Loiola, inaugurated January 15, 2013, has accepted 85 boys and girls. The entrance examinations for the second class beginning on August 31, 2014, have already been held. The faculty of education of the new university, now waiting for official approval, is expected to open in the year 2015. Both institutions are located in a rural fishing section of the country, about 20 km from the Capital Dili. At present I teach Religion to the first-year students of middle school and am preparing for the opening of two libraries, one for the middle-high school and another for the new university. At the same time I am involved in running the scholarship program. On Sundays I say Mass in chapels of mountain areas and at the seaside.

Timor-Leste is located at the latitude of southern Japan. I flew from Haneda on a night flight via Bali (Indonesia), and changed planes in Denvasar. Finally I arrived at Dili at noon the next day. The area of Timor-Leste is more or less the same as that of Iwate Prefecture and its population is about 1,100,000. Since the mid-16th century till recently Timor-Leste was a Portuguese colony. On November 28, 1975, the Fretilin political party declared the country’s independence, but in December the Indonesian Army invaded the country and annexed it as its 27th province. In 1975 Portugal abandoned Timor-Leste definitively. An Indonesian administration then took over and appointed a new governor. Dili became an Indonesian town and the Indonesian army was stationed there. Public services like health insurance, rural policies, education, mass media and others were placed under Indonesian administration. General elections were held as a region of the Indonesian government. In 1991 some 11,036 Indonesian officials held the most important jobs there. The educational system followed that of Indonesia, and schools taught in the Indonesian language, using the same textbooks as the motherland. All this meant that the national identity was switched over to becoming part of Indonesia. In particular, most high school teachers were Indonesian and, with the declaration of East Timor’s independence, they all withdrew, leaving the educational system of East Timor in shambles. This obliged East Timorese to make up for their loss, with the result that even now 70% of the teachers have not yet received adequate educational training on November 12, 1991, the Indonesian army massacred many citizens at the Santa Cruz cemetery, an incident that was reported all over the world by foreign journalists. Two main leaders of the independence movement, Catholic Bishop Bello and Ramos Horta, future President of Timor-Leste, were awarded the Nobel Peace Prize. At this time the European Union and the United States took a serious attitude towards Indonesia’s military invasion of East Timor and its violation of human rights. The political connivance of the countries concerned and the fact that the arms used in the military invasion were American and British gave rise to an international problem. President Suharto resigned when Indonesia was badly hit by the Asian financial crisis. His successor, President Habibi, recognized the participation of the United Nations in the affairs of East Timor. At an international conference of the countries concerned which met in New York on May 9, 1999, it was agreed to hold a public referendum asking the citizens of East Timor whether they would vote for independence on August 30, 1999 or chose to remain a free territory under Indonesia. 98.6% went to the polls and 78.5% voted for independence. Moreover, the Indonesian army and East Timorese militia men in favor of annexation with Indonesia wreaked such massacres and destructive activities that the United Nations Security Council decided to send in a multinational force. From 1999 a provisional administration under the authority of the UN, called UNTAET, was established. Finally, East Timor gained its independence on May 20, 2002. It is said that between 1975 and 2002 many became refugees and over 200,000 citizens died or disappeared. 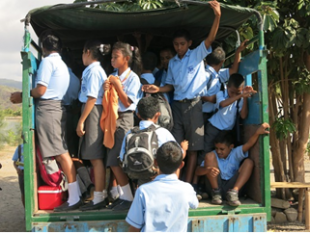 East Timor has celebrated its 10th anniversary of independence, but in 2006 a civil war occurred displacing many people and in 2008 President Ramos Horta was the target of a sniper, which provoked a political situation of uncertainty. The war occasioned by the Indonesian military occupation and annexation was the main cause of military conscription and the abandonment of rural lands, causing a lack of food. One must realize how greatly all this has affected the lives and hearts of the people. Many fleeing from war and obliged to live elsewhere have been cut off from their rural lands and the traditional family-based hamlets where they supported each other. Poverty situations continue and economic and social structures remain very weak. (It should be mentioned that for three consecutive years after 1942, East Timor was under the military control of the Japanese army. Problems like that of the “comfort women” at the time of Japanese rule still call for some suitable solution. On the other hand, it is a fact that since 1999 large sums of Japanese official assistance have been provided to East Timor. People acknowledge that with gratitude.)

The UN administered the reconstruction of East Timor for 10 years and in December 2012 terminated all its activities there. At the time of my arrival I saw many cars in Dili with the initials UN. UN officials were working in public offices. I met them at the airport immigration and customs as well as in tax offices. The country had at the time fewer than one million inhabitants and had to jump-start from zero various structures like the executive, the judiciary, and the legislative. That was also the case with education and the police system. The country got its independence in 2002, but it took a while to become stable. In July 2012 an international organization of watchers oversaw the general election for the People’s Committee. The results were fair, despite some small incidents and the killing of various people. I was present when some people at a demonstration of supporters of a political party ran away shouting slogans.

Three Japanese Jesuits were working in East Timor before independence and during the turbulent times after the declaration of independence. Fr. Hayashi, director of the Shimonoseki Labor Education Center, visited East Timor often at the time of the Indonesian military invasion and openly declared his solidarity with the Timorese. Fr. Horie Tetsuro, now in Brazil, remained for seven years in East Timor, where he taught at the major seminary. Fr. Yamada Keizo, former professor of Sophia University, worked and lived in Suai, a southern town near the Indonesian border, the site of a massacre right after the national elections for independence. Even now many people recall with affection these three Jesuits who accompanied the East Timorese to independence and are grateful for their services. Compared with those times, people nowadays lead a more relaxed life and are more positively minded. Families feel sadness for their missing ones, but the prospects for building a new life are bright. The characteristic vitality seen in other Asian countries can also been observed in the streets of East Timor. The withdrawal of the UN was expected to affect the economy of East Timor adversely, but as far as can be seen the impact was limited only to some areas. The government invested positively in public works like road construction and sewerage, and electricity and infrastructures have improved. Some accords with Indonesia and Australia to develop oil and natural gas resources in the sea south of Timor have been signed, but with Australia pending issues still remain. Nevertheless, the government has set up an “Oil Fund” from tax revenues and royalty income to bolster its national budget.

There is no change in the work of solidarity, but my present situation, involved as I am in education, differs from when the three above-named Jesuits were working here.

I would like to offer now a view of East Timor as I see it from my position as a teacher in the school. Since I teach religion to first-year middle school children, I read their notes in the Tetun language and help in their exams. Since I 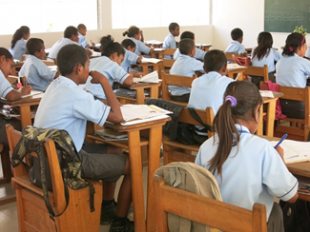 do not know their language, I am studying Tetun through their textbooks. Both Portuguese and Tetun were official languages in East Timor, but since the independence of the country Tetun has become the only official language. During the Indonesian military invasion the Indonesian language was imposed on the population. Before that Tetun was predominant along with other local languages. The Catholic Church used Tetun in its liturgy, even during the time of the Indonesian invasion. (Formerly, the Catholic Church had performed its liturgy in Portuguese.) At present the government only allows the use of Tetun for the subjects of “Tetun language” and “Religion.” For other subjects, textbooks and exams must be in Portuguese, according to official regulations. Nevertheless, because of the political confusion of the country after independence, despite regulations to use Tetun as the standard language, the fact is that there are still no textbooks to teach Tetun in middle school, and there are very few literary materials to read in that language. The Tetun textbook I use is published by a university that set up an annexed language school, but the spelling of words is different from the official standards fixed by the government. The newspapers use also various spellings. Again, the spelling of words in the liturgy differs depending on the publishers. Moreover, the present teaching staff has received its education only in the Indonesian language. There are adults that say they know the Indonesian word to name something or the Indonesian expression but not the Tetun words. As a result, teachers cannot strictly demand that students write the exact spelling in examinations. When you add to this the fact that Portuguese is the language of textbooks, everything becomes quite complicated. Teachers cannot speak Portuguese. And again, in a situation where the rate of those attending middle and high school is so low, there is fear that Portuguese literacy might possibly become a factor in determining one’s economic and social status.

I regard my mission to work in an East Timorese school as an important challenge to witness to respect for mutual human dignity, or in other words, to work for the spread of human globalization. Concretely speaking, time spent together studying at school elevates each one’s human dignity and self-esteem. Students learn to accept others and as a result learn how to contribute to building a much better society in East Timor, a country that has experienced a long history of adversities. We also need to look at the Japanese situation from the same perspective. Japanese people, recognizing their leading position in the global economy, enjoy the potentiality to promote human globalization to “build right relationships in the world,” “bring reconciliation to a divided world,” and “work to restore a true humanism” (Society of Jesus General Congregation 35, Decree 3).