From the Catholic World(172) 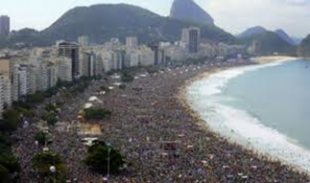 Francis told those present that it was time to go and to pass on this experience to others. Addressing a crowd of people gathered on Copacabana beachfront, the Pope focused his message on the very theme of World Youth Day: “Go and make disciples of all nations”. To the young people gathered to be with him, Pope Francis offered three simple ideas: “Go, do not be afraid, and serve”. The Pope encouraged them, saying, “Follow these three words: Go, do not be afraid, and serve. If you follow these three ideas, you will experience that the one who evangelizes is evangelized, the one who transmits the joy of faith receives joy.”

SYRIA – A small “WYD” in the city of Aleppo
Aleppo, Aug. 2 (Agenzia Fides). – On the day that Pope Francis celebrated the concluding Mass of World Youth Day in Rio de Janeiro, about 850 young Christians gathered at the Youth Center George and Matilda Salem, animated by the Salesian Fathers in the district of al-Sabeel, where they shared a day of reflection, prayer, discussion and entertainment. An Armenian Catholic Bishop describes his shared experience with the young people of Aleppo: “I was amazed to see so many young people without fear, in a city scarred by war. […] We made the most of the words that Francis Pope had said in the early days of World Youth Day, with his call not to allow anyone to steal hope”.

CENTRAL AFRICA – Funds allocated for the reconstruction of 4 dioceses
Bangassou, Jul. 30 (Agenzia Fides) – Four Central African dioceses which were attacked and robbed by a group of radical Islamist of the coalition Séléka, from Chad and Sudan, will benefit from an urgent aid campaign promoted by the humanitarian organization Aid to the Church in Need. The rebels, in this region, looted 50% of the assets of the Church. In a statement, Msgr. Aguirre, the bishop of Bangassou, one of the affected regions, reported that the population is experiencing widespread and systematic attacks by criminal groups that use violence as a language and weapon of war.

JORDAN – Religious proselytism in refugee camps: the Catholic Church stands off
Amman, Jul. 30 (Agenzia Fides) The initiative of Christians linked to evangelical groups that were filmed while distributing gospels and leaflets concerning spiritual reflection in the refugee camp in Zaatari, the main camp for the reception of refugees fleeing the Syrian civil war present on Jordanian territory, continues to be at the center of a debate. The movie, on the internet, continues to provoke controversy and causes the stand off on behalf of Catholic Church responsibles: Archbishop Maroun Lahham of the Latin Patriarchate of Jerusalem says, “Exploiting humanitarian initiatives to achieve forms of proselytism has nothing to do with the dynamics of authentic Christian witness.” 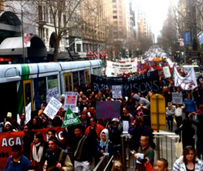 Solution’ and has called on the Prime Minister to disclose the true cost of this cruel and inhumane policy – the cost to the Australian taxpayer, and to the community of Papua New Guinea and the lives of those people seeking refuge in Australia. Sending asylum seekers to PNG is a punitive, ill-considered and rushed policy announcement, seemingly designed to win an election rather than to strengthen safe pathways for those fleeing persecution. With more than 40 percent of its current population living in poverty, PNG lacks the resources and services to provide for its own citizens, let alone refugees who require specialised services and support of the kind offered by agencies such as JRS.